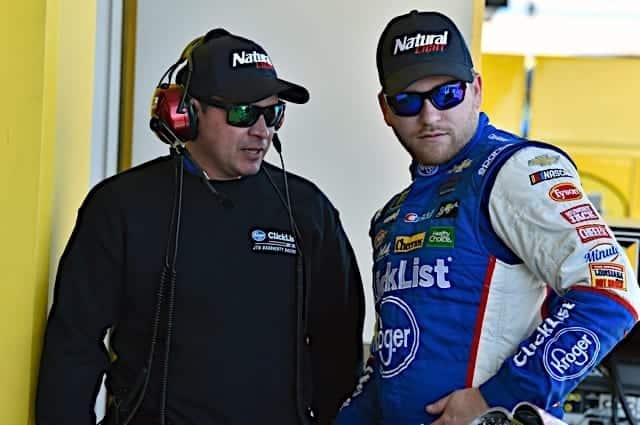 In 2018, NASCAR did away with special aero packages just for the restrictor plate tracks. Now, teams utilize the same rules at Daytona International Speedway and Talladega Superspeedway that they run at every other track on the schedule. There are differences in what the car uses to establish the racing platform, but the scanning system that checks the vehicles in technical inspection enforces the same rules as every other track the series visits.

Talladega this weekend will be the second time this year the cars will run the consistent aero package on a plate track, following the season-opening Daytona 500.

In anticipation of the race this weekend, Trent Owens, crew chief for Chris Buescher in the Monster Energy NASCAR Cup Series, looks at what his No. 37 race team will be doing to prepare for the race. That includes chasing a balance between driveability and speed.

Mike Neff – The Coca-Cola 600 at Charlotte Motor Speedway always has this big transition from daytime to night. The same thing happened at Richmond this weekend. There were definitely cars that were faster in the daylight and others that were faster at night. Did you have to make some significant changes to keep up with your car as the sun went down?

Trent Owens – Coming from one of the cars that was really good in the day practice and really bad during the race, I didn’t make a lot of changes, because I didn’t have a lot of good notes to say with confidence what the track was going to do. So I had to hope for the best, and it ended up being the worst.

Definitely had a big swing from practice to the race for our team, at least. I did notice some teams that also struggled at night after being good in the daytime. There were others that were good the whole time.

I definitely have to figure out what to do different between day and night. I wish in a lot of ways that we’d get a nighttime practice when we have an event like that. It is my position to figure it out, and that is what I’ll do.

Neff – NASCAR switched this year to the same aero package that is run on all of the other tracks for the plate tracks as well. What did you see different at Daytona International Speedway  this year that you didn’t have with the previous aero package?

Owens – From my perspective, I like it better not having to worry about maintaining a ride height after the race, just working with the parts that we utilize at the other tracks and being able to lower it down. I thought the cars were a little bit more of a handful. As we search to get the car as low as possible and get as much speed out of it, there seems to be more of a balance between getting the drag out of the body versus driveability and handling. You won’t see it as much at Talladega; Daytona tends to be more of a handling track than Talladega.

With the new package, you definitely have to consider how you merge the packages together to go out and race well and not just lay down one lap. It will be interesting to see this second time on the track with this package for a plate race this weekend. I anticipate three- and four-wide racing with a big pack of cars, and I just hope we survive.

Neff – The Talladega asphalt seems to be starting to age, and last year, handling started to be a factor there. With this new package, are you going to have handling come into play even more?

Owens – Especially when you get a little warmer temperatures, we have seen some handling trends and some cars break loose on their own at Talladega. If you go down there and are strictly looking at getting the spoiler out of the air and getting the rear as low as you can, you may experience some driveability problems that will show up at the race, especially with 25 laps into the race, thanks to the tires and the surface being older. We’ll see, but definitely, with this package, you can miss your handling a little more than [before].

Neff – A few years ago, fuel mileage actually came into play at Talladega, based on the length of the race. Is fuel mileage a concern now, or are you still more worried about the tires wearing out?

The only thing you have to be certain of is having some other drivers and teams pitting with you, so you don’t lose a draft. If you run around as a single car, you’ll get lapped pretty quickly. I know the Toyotas seem to pit on strategy together. A lot of times they’ll choose a… we call it a backwards lap, similar to a road course. If the caution comes out after the pit stop, you can stay out and go right to the front. We’ll definitely look at the fuel and pitting with our teammate more than we do at other tracks.

Neff – You always have some cars that push better at plate tracks and others that lead better. Do you really get a chance to test that out much at practice down there, or is it too much of a risk of tearing up your car to try to mix it up in a pack during practice?

Owens – For a team like ours, we do not want to use our backup car. We will play practice rather safe and not draft. So we don’t know if we are better leading or behind; we will wait for the race to figure it out. There are some packs that for during practice that are big enough, 15-or-so cars, and you’ll tell if your car can lead or if your car needs someone behind you to push you. Some teams who don’t mind taking the gamble will find that out in practice. Teams like ourselves choose to play it safe and will have to wait until race time to figure it out.

Neff – At these plate tracks, getting air to the radiator is critical when you’re in the pack. How much can you play with taping up any openings?

Owens – NASCAR regulates the grill opening size on speedways. I feel like for most circumstances, it is pretty generous. We will run two inches of tape total, which is not a lot. However, if the cars get tucked up pretty tight, we can run five or six laps with no issues. So I feel like NASCAR is pretty generous there.

The bumpers these cars have don’t line up really well. Unlike years back in XFINITY [Series] when cars could lock up, these Cup cars don’t seem to line up quite as well. The Toyota nose seemed to be a bit of a challenge for those guys at Daytona. Even the Camaro has a little bit of a tip on it, so it is hard to push. We really don’t have much fear about the grill opening. NASCAR opened that up a year or two ago, and I think it has been good since.

Neff – You seal these cars up as tight as you can to maximize the air flow over and around the car while minimizing the turbulence inside the car. However, NASCAR doesn’t want to cook these drivers in the cars. Are there requirements for NACA ducts on the right side of the car for these plate races?

Owens – Yeah. Unlike the past, we are required to now have a double NACA on the right side with hoses running to the driver. They either have to point toward the drivers arms and body or down by his feet where it gets really hot. It is pretty much full throttle, wide open, lap after lap at Talladega. The heat buildup is quite severe. Aside from us crew chiefs trying to tuck everything up as tight as we can to the floor, which doesn’t help them out either, we have improved the area of cooling the driver. It wasn’t that long ago, especially during summer races, you’d hear about them getting blisters on their feet and legs. There are definitely some rules in place now to force us crew chiefs to take care of our drivers.

Neff – With the old package, officials used to assign you rear springs and shocks. Do they still assign them?

Owens – No, we are open book on springs and shocks now at the speedways. It is really no different than our race at Richmond. We choose what springs we want in the car and whatever four shocks we want. Once we pass tech, we drop them down to whatever race height we want to do and feel comfortable pitting the car. That is what it is now.

I like the package better; I like working with it. However, it is a little more challenging to get the car to handle as good as the old package.

Neff – Martin Truex Jr. and a couple other drivers had issues with pitting their cars at Richmond, and we’ve seen a few of those issues throughout the year. Now that the cars are so low to the ground and when they pit they are almost sitting on the ground, have the jackmen had to modify their jacks to get them under the cars?

Owens – Yeah. As we went through the lowered ride height in 2014, we have kept getting lower and lower. The jacks are being custom-made now. We have gone through about three versions of jacks already, especially the left side, which seems to get really low. You’re right on saying the jacks are different, because they definitely are. The jack plate is only about one inch off of the ground now, if you can imagine that. It is hard for the tire carriers. You have probably noticed the tire carrier struggling the most with the left-front tire with the fender clearance and all. It is really hard to get the left-front suspension to droop out with the type of sway bar packages and so forth. The left front is probably our worst problem.

Neff – We saw a penalty for Kevin Harvick‘s team this weekend when it made an adjustment and threw the wrench over the wall. It appears that, had the wrench landed on the ground in the pit box, it would not have been a penalty. Is it true that the rules stipulate that?

Owens – It very well could be. I did not see the incident you’re speaking of. I have seen similar incidents with a tire changer throwing a spring rubber from one side of the car to the other. You’re not allowed to throw equipment from the other side of the car over the wall. Sometimes they catch it and sometimes they don’t. I’m not going to say it doesn’t happen and they don’t catch it. The way the rules are written, it is definitely a penalty. Sometimes it is such a judgment call. It is really tough to go one way or the other. The calls they were cracking down on the other night, or it was at least most noticeable, was the uncontrolled tire violations. That was the first time they seemed to get really serious about enforcing that rule. I feel like that is going to be a concern going forward.