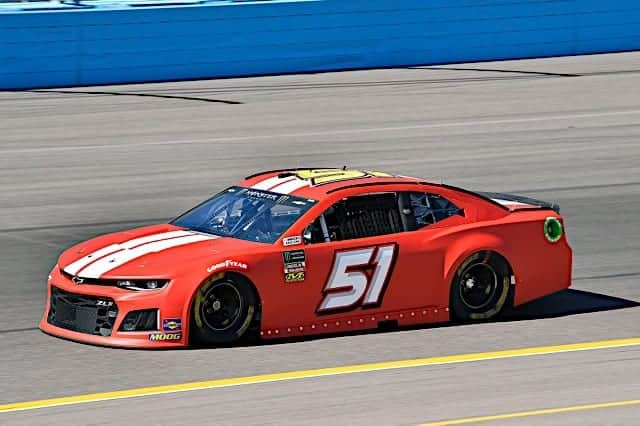 Rick Ware Racing announced Thursday (April 26) that Timmy Hill will return to the No. 51 Chevrolet this weekend in Talladega.  The team originally planned on running XFINITY Series regular Cole Custer in a Ford in collaboration with Stewart-Haas Racing.

The team will be sponsored by Keen’s Buildings.  In addition, Talladega will see the debut of a new campaign on the car, Race to Erase Opioids.  Rick Ware Racing is teaming up with former FOX News Channel commentator Eric Bolling to bring attention to the ongoing opioid epidemic and how it has negatively affected the United States.  Bolling states that the Race to Erase Opioids will be on the No. 51 for multiple races, but did not indicate an exact number.

“We are proud to partner with Eric Bolling and help bring awareness to the ongoing opioid battle,” team owner Rick Ware stated in a press release.  “With the help of social media, Timmy, our team and the influences of others, I hope our message spreads across many platforms over the coming months to bring attentiveness to the real danger of opioids.”

For Hill, Talladega will be his third race of the season and 12th Cup race overall with Rick Ware Racing.  He made his Cup debut with RWR back in 2012 at Las Vegas, finishing 42nd.  He finished 33rd in both of his starts this season (Phoenix and Fontana).  Hill’s best Cup finish with the team has been 28th at Kansas in October of 2017.

Bolling has skin in the game himself.  His 19-year old son, Eric Chase Bolling, died of an accidental drug overdose last year.  Since then, Bolling has been traveling across the country and speaking at assemblies about the risks of opioid use.

There are well over 100 different types of opioids available.  Typically, opioid abuse refers to the abuse of pills such as Vicodin, OxyContin, Percocet and Fentanyl.  However, Heroin is also considered to be an opioid.

Rick Ware Racing’s press release about the new collaboration only talks about Hill driving the No. 51 this weekend in Talladega.  However, when Bolling announced the collaboration of Twitter, he made reference to Kevin O’Connell being involved in the effort.

O’Connell is a 50-year old California-based road racer who has one career Monster Energy NASCAR Cup Series start and eight career starts in the XFINITY Series.  He finished 33rd at Sonoma Raceway in 2017 driving Premium Motorsports’ No. 15 Chevrolet.  In the XFINITY Series, O’Connell’s best finish is a third at Road America in 2014.

The orange 51 reminds me of AJ Foyt’s Winston Cup Race Car back in the day before he got the #14.