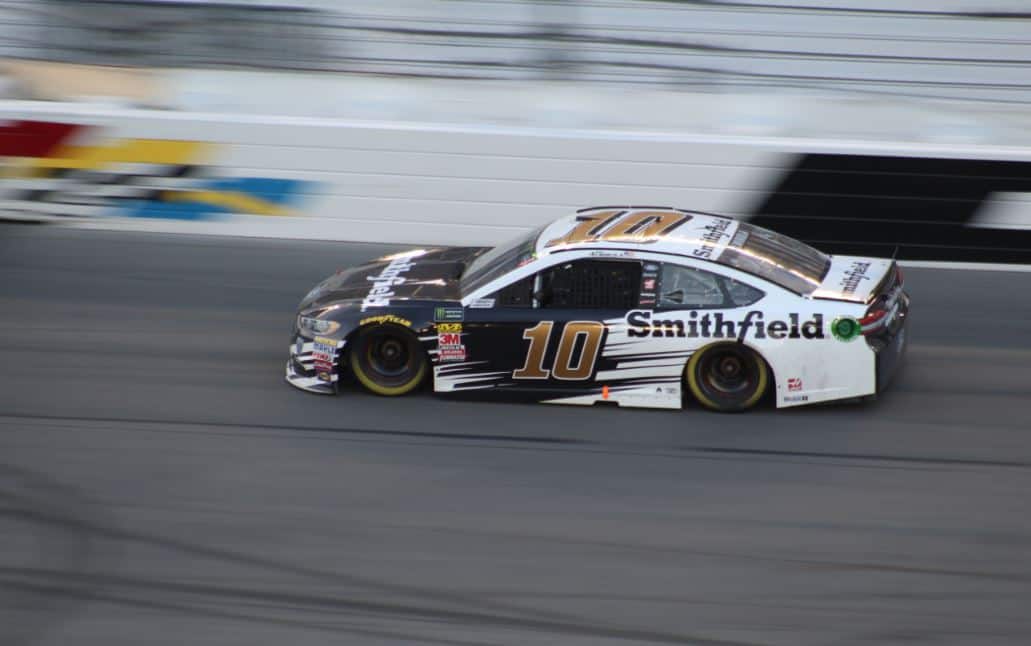 The edge-of-your-seat excitement produced by restrictor plate racing is paired with a great new fantasy game this weekend. FanDuel announced earlier this week it will be opening up weekly NASCAR contests, the first of which debuts this Sunday at Talladega. Don’t miss out and play with your favorite Frontstretch writers! The contest entries lock at 2:00 p.m. ET, right as the green flag flies for the race.

Enter the $5 Frontstretch GEICO 500 NASCAR contest for your chance to win!

FanDuel has put an emphasis on finishing position and completed laps. For this reason, it will be important to pinpoint drivers that have historically remained trouble free at one of the most chaotic tracks in NASCAR.

Those who have played DraftKings fantasy NASCAR are very familiar with the term dominator. But with only 0.1 points awarded for each lap led by a driver, the need for a dominator is less important when building a winning lineup. The 188-lap race will only have a total of 18.8 points up for grabs in this category.

That said, here are three drivers that are starting in the middle to rear of the field that have the best chance of finishing up front. Keep in mind the FanDuel rules should have experienced fantasy players making a few key adjustments in order to produce winning teams.

Dillon already has one restrictor plate win this season. His Daytona 500 victory in February sealed a spot in the NASCAR playoffs.

During his young career, Dillon has become one of the rising stars at restrictor plate tracks. Though he did have a down 2017, wrecking out of both Talladega races, he was great in 2016. In the four restrictor plate races that year, Dillon finished inside the top 10 in all four, including a third-place result in this exact race. Add in that last-lap magic from Daytona and he’s a good bet to be up front this coming weekend.

Almirola was a half-lap from winning the Daytona 500 in this season’s first race before being moved out of the way. Since then, he has been on a redemption mission. His average finish of 13.6 through nine 2018 races is by far a career best.

While making his qualifying run Saturday afternoon, Almirola’s tire went flat. Shortly after completing his lap he spun through the middle of turn one. His lap was slow as a result and he will be starting at the back of the pack for the race. That means Almirola will automatically be one of the most sought-after drivers on FanDuel this weekend.

Why? That .5 points apiece awarded for position differential. A top-10 finish would add around 15 extra points for Almirola on top of the 31 finishing position points.

Keep in mind Almirola’s only MENCS win was also at a restrictor plate track. He won the rain-shortened Coke Zero 400 at Daytona back in 2014. Now, he’s armed with better equipment driving the No. 10 Stewart-Haas Racing Ford and is primed to run at the front of the pack.

Even though he has limited Talladega experience, in the few races Dillon has run, he has been good. He finished 13th in his track debut last season and also ran up front and led three laps during the race. He followed that up with an 11th-place result in the second race, tying his career best.

Dillon was involved in Jamie McMurray’s scary wreck and suffered some damage. The team rolled out the backup car and he will have to start at the rear. The No. 13 car will be scored from 29th either way, which still leaves room for positive position differential points.

Dillon, having a difficult sophomore season may fly under the radar. That means he will provide salary relief to reach for bigger names to fill out the remainder of a lineup. 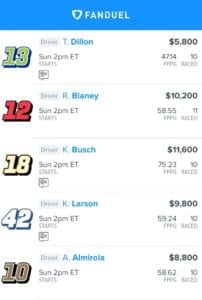