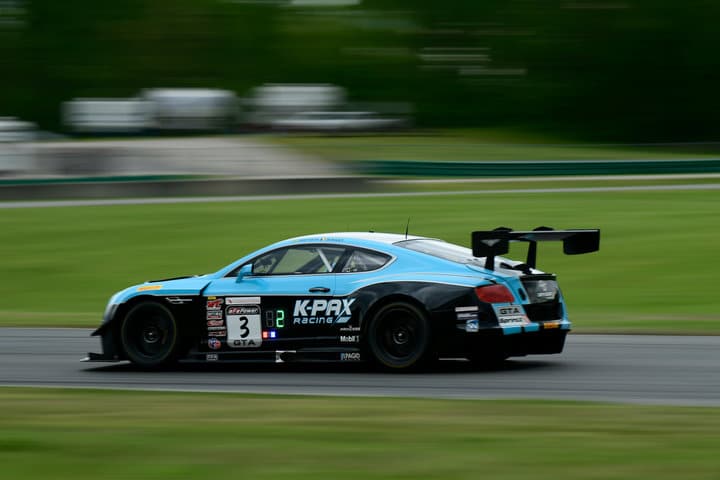 In a rare instance, the Pro-Am pairing of Rodrigo Baptista and Maxime Soulet claimed overall victory in GT SprintX Race No. 1 at VIRginia International Raceway on Saturday.  Baptista was able to get past pole sitter Daniel Morad on lap 9 and pulled away from the pack.  From there, Baptista and Soulet spanked the field, winning by 19.474 seconds over Pro-Pro winners Miguel Molina and Toni Vilander of R. Ferri Motorsport.

“At the start of the race, I just tried to stay out of trouble and stay clean,” Baptista said after the race.  “On the second lap, I tried to push because I knew we had a pretty good car, and Morad was sliding around a lot.  So, I knew I could pass him.  I tried once on the back straight, and we almost touched so I waited.  Then two laps later, I tried again and gained the position.  This was a great win for K-PAX Racing and Bentley.”

For Baptista, it is his first career Pirelli World Challenge GT overall victory in only his sixth PWC race in GT3 equipment.  Normally, reaching overall paydirt as a GTA driver means immediate promotion to the GT class (in this case, the Pro-Pro division).  No word as of yet from Pirelli World Challenge officials whether the No. 3 will become a Pro-Pro entry for Sunday as of this writing.

While K-PAX Racing was overjoyed with their victory, their joy was understated because of what befell their second entry.  On the first lap of the race, Àlvaro Parente was nudged off the course in turn 2 by Lone Star Racing’s Mike Skeen.  The result was this big crash that immediately put the race under a full course caution:

Parente was ok, but was not very happy.  Skeen was judged to be responsible for the crash by series officials.  As a result, he was given a hefty stop and three-minute hold that cost him two laps.  Skeen and teammate Scott Heckert ultimately finished three laps down in 13th.

Unfortunately for K-PAX Racing, the No. 9 Bentley is too badly damaged to be fixed at the track.  Parente and teammate Andy Soucek will have to sit out Race No. 2.  The team was already racing a backup chassis after Parente crashed heavily at St. Petersburg following a brake issue.

After the restart, Morad and Baptista slowly pulled away from the field.  Once Baptista got by Morad, Baptista opened the gap even more before the mandatory pit stops.

During said pit stops, CRP Racing had serious trouble changing the left front tire on the No. 2 Mercedes.  An issue with the wheel nut resulted in a 89-second stay on pit road when the minimum allowed was 75.  That resulted in Morad’s teammate Fabien Schiller rejoining the race in fifth.

Soulet was gifted a nine-second lead over R. Ferri Motorsport’s Molina, who inherited the Pro-Pro division lead after CRP Racing’s pit woes.  Despite Molina’s quick pace, Soulet was able to easily drive away.  Meanwhile, the battle was for third in class between Pfaff Motorsports’ Wolf Henzler, Alegra Motorsports’ Spencer Pumpelly and Schiller.

Schiller, desperate to make up for lost time, dove to the inside of Pumpelly entering turn 1 with four laps to go.  Contact was made and Pumpelly spun out.  Schiller was given a drive-through penalty for the incident and finished eighth overall.

The combination of Henzler being on slightly older tires, the aforementioned spin and slower traffic allowed Molina to pull away from the pack.  From there, Molina held on for his and Vilander’s third straight SprintX win to start the season.

Molina and Vilander finished 5.1 seconds ahead of Henzler and Scott Hargrove in second.  GMG Racing’s Michael Lewis and Alec Udell ended up third, followed by Pumpelly and Michael Christensen.  Morad and Schiller ended up fifth in Pro-Pro.

In the Am division, Squadra Corse Garage Italia’s Caesar Bacarella and Martin Fuentes earned an easy win.  David Askew had an adventure early on.  At the same time that Baptista was passing Morad for the overall lead, Askew spun and hit the tires at the Oak Tree turn after contact from Dore Chaponick.  Another off-course excursion, significant time in the pits and a black flag for shedding debris resulted in Askew finishing four laps down.

GT SprintX Race No. 2 is scheduled to go green at 11:30 a.m. Sunday morning.  It will be streamed live at World-Challenge.com.