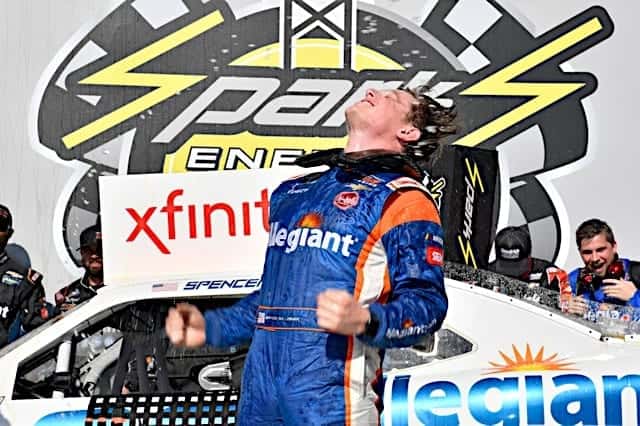 Spencer Gallagher was able to hold off a hard-charging Tyler Reddick to secure his first career victory in the Sparks Energy 300 at Talladega Saturday (April 28). Gallagher got a wicked run on the inside of Reddick, who won at Daytona, and he never looked back; Reddick ended up eighth.

“The only thing going through my mind was ‘I hope to hell that this works,'” Gallagher told FOX Sports’ Ryan Blaney in Victory Lane.  “I’m so happy right now. GMS Racing brought such an incredible car here [to Talladega]. To qualify this thing third and race like we did all day, I knew we had the speed. Man, it didn’t seem real for a while.

“The whole last lap was sort of like a dream. You hear your spotter talking to you in the background, but all you’re doing is looking at the mirror. It’s always wild on the last lap at Talladega, but we brought it home!”

Despite the fact that Gallagher had a pretty big lead over the rest of the field, Brandon Jones still made some moves to earn a career-best second-place finish. Justin Allgaier, who ran out of fuel during the final caution period, rebounded to earn a third-place finish. Noah Gragson and Elliott Sadler, who suffered a speeding penalty earlier in the race, rounded out the top five.

Sadler won his second consecutive Dash 4 Cash $100,000 bonus by finishing fifth. Austin Cindric came within two laps winning the bonus, but an empty fuel tank killed those dreams and a shot at next weekend’s bonus, the final of the season. Cindric ended up finishing a lap back in 30th.

Ryan Sieg kept out of trouble to finish sixth, followed by John Hunter Nemechek, who recovered from an early spin. Reddick dropped back all the way to eighth on the final lap, while Cole Custer and Garrett Smithley were ninth and 10th.

For a Talladega race, the event was rather calm with the exception of one big accident. Daniel Hemric led the entire first stage, earning the stage one victory.

On lap 34, the No. 28 of Dylan Lupton got loose on the backstretch, hooking the No. 60 of Ty Majeski. Behind them, Chad Finchum slowed down to avoid the action and he got spun into the outside wall by Kaz Grala. Spencer Boyd flew into the crash and hit Finchum and Lupton before coming to a stop in the cluster with Majeski and Ryan Truex. Boyd’s run through the scene was blamed on having dragged the brake too much in stage No. 1. As a result, Boyd’s brakes were overheated and insufficient when the need arose to use them. A total of seven drivers were involved in the accident with Shane Lee and Grala the only drivers able to continue.

Sadler took the lead on lap 42 and never looked back earning the victory in stage two.

As the field approached lap 63, Cindric spun and went through the infield grass, impressively not collecting anyone else. This would set up the run to the finish, or so we thought. Both Allgaier and Cindric were setting their table on fuel strategy and the real question was who had enough left in the tank to get the victory.

That question was slightly soiled when Hemric lost a right front tire on the frontstretch. During the caution laps, cars left and right began running out of fuel including Allgaier, who was leading at the time. Cindric led the field to the restart zone and his car ran out of fuel, he moved up the track to get out of the way as the first attempt at overtime began.

Gallagher would move in front of Reddick and never looked back en-route to his first career victory in NASCAR’s top-three divisions.

The XFINITY Series will be back in action next Saturday at Dover International Speedway. The OneMain Financial 200 is scheduled to go green at 1:30 p.m. on FOX Sports 1

I like i see a family own team win races. You never know how the rich kids are going to act in Victory Circle with their celebrations. Spencer was a good winner thanking everyone.