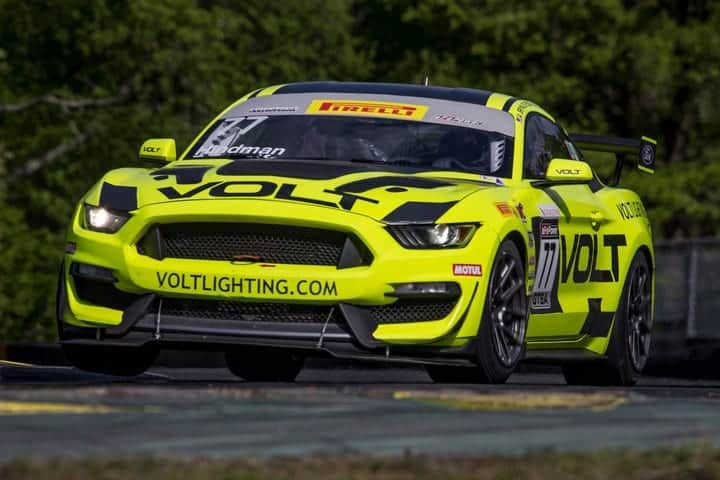 “All of this is new to me,” Brynjolfsson said after the race.  “I didn’t have a racing license two years ago and had never been in a race car so I’m new to race car driving.  This was first race in the Pirelli World Challenge this year, so to come out with a win in the pro category is a great.  With pro driver Trent Hindman backing me up, it’s been quite a journey.  That’s what made the win extra special is that it’s a big win with some really big cars.  It was very competitive and it made it that much more special.”

“[Alan] did an awesome job qualifying with this field with some of the names mentioned, so without that effort, it would have been a pretty tall effort to do what you ended up doing,” Hindman stated.  “There’s a ton of really strong cars but you can’t count out the Ford Mustang.  You look at the history of cars and the Mustang has been there throughout.  But stil,l tomorrow is going to be interesting because we now have the proverbial target on our back, so we have to push a little bit harder.  Today was a great result, but it’s not going to stop us from trying to find more.”

74 Ranch Resort’s Shane Lewis started from pole in his Mercedes, but that advantage was short-lived.  PF Racing’s Scott Maxwell was quickly able to snatch the advantage away in his Ford Mustang GT4.  Over time, the No. 55 Ford of Maxwell faded, allowing drivers like Brynjolfsson to rise to the challenge.

It was the mandatory mid-race pit stop that allowed VOLT Racing to pick up time.  The minimum time that must be spent in the pit lane is 75 seconds.  Brynjolfsson and Hindman cut that quite close.

Once the stops were complete, Classic BMW/Fast Track Racing’s Chris Ohmacht had the overall lead in the Am-class No. 92 BMW.  Hindman was able to run down Ohmacht and take the lead on lap 15.  From there, Hindman pulled out a six-second lead over the pack.

The race was originally scheduled to run for 60 minutes.  However, the checkered flag was displayed eight minutes early.  That was due to a big crash for NOLAsport’s Keith Jensen.

The crash necessitated repairs to the Armco barrier that could not be completed in time for the race to resume.  To stop teams from putting around unnecessarily under yellow, the race was called early.

In the Am-class, Toby Grahovec won the class pole in his No. 92 BMW and led easily from pole.  Excellent pace, plus a great pit stop resulted in Ohmacht getting into the car and inheriting the outright lead.  Unfortunately, Ohmacht doesn’t quite have the same pace as Grahovec.  Once Hindman took the overall lead away on lap 15, Ohmacht slowly dropped down the order.  Luckily, he’d been spotted a large enough lead that he was easily able to hold on to take the Am-class victory.

Grahovec and Ohmacht ended up finishing a strong fourth overall in the race.  Stephen Cameron Racing’s Greg Liefooghe and Henry Schmitt finished second, followed by Jeff Courtney in his JCR Motorsports Maserati.  Flying Lizard Motorsports’ Mike Hedlund was fourth in class, while the ST Racing BMW of Aurora Straus and Jon Miller finished fifth in class (13th overall) after starting at the rear of the 37-car field.

GTS SprintX Race No. 2 at VIR is scheduled to go green at 1:50 p.m. Sunday afternoon.  The race will be streamed live at World-Challenge.com.