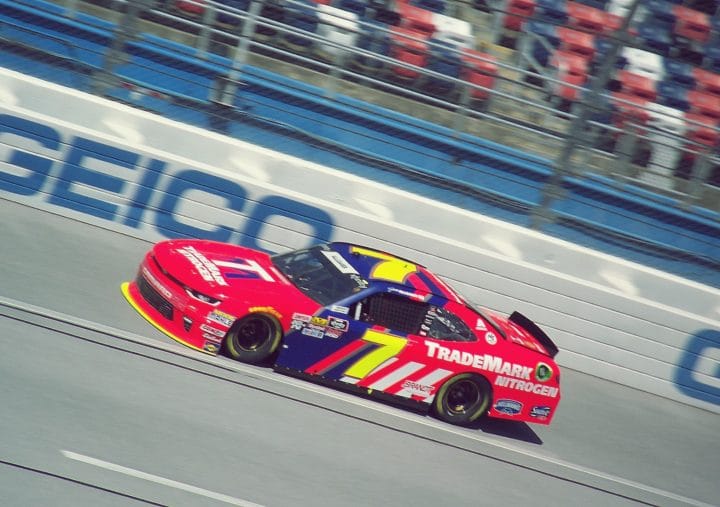 It was a whirlwind of a day for Justin Allgaier and the No. 7 team at Talladega Superspeedway on Saturday, but when the checkered flag flew, he emerged with a third-place finish. Allgaier held more than a 20-second lead as the laps ticked down, but he ran out of fuel on a late-race caution. The empty tank made it look like the day was over for the team but a calm race and a fast race car resulted in a run of the race for Allgaier.

“This team is incredible with a never give up attitude,” said Allgaier. “I thought for sure we were in trouble there especially when you run out of fuel. That was just a crazy crazy situation. Luckily the push truck got to me right away and we were able to get back to the pits and you know we did everything we could do.”

Allgaier put his car wherever there was a hole in the overtime finish. He had to make up all the positions he had lost after running out of fuel from the lead. It was like the seas parted for both Allgaier and his teammate Elliott Sadler as both made their way to the front.

“At the end of the day, you can’t as for anymore. I was lucky enough to be able to run up the middle there and make really good ground. My teammate, Elliott Sadler, did a great job of pushing me up through there. We honestly got lucky in the end.”

Whether it be luck or the pure speed of the No. 7. Allgaier will compete for the $100,000 bonus next weekend at Dover following a fourth-place finish. The finish was his fifth top-five finish of the season and 57th of his career.