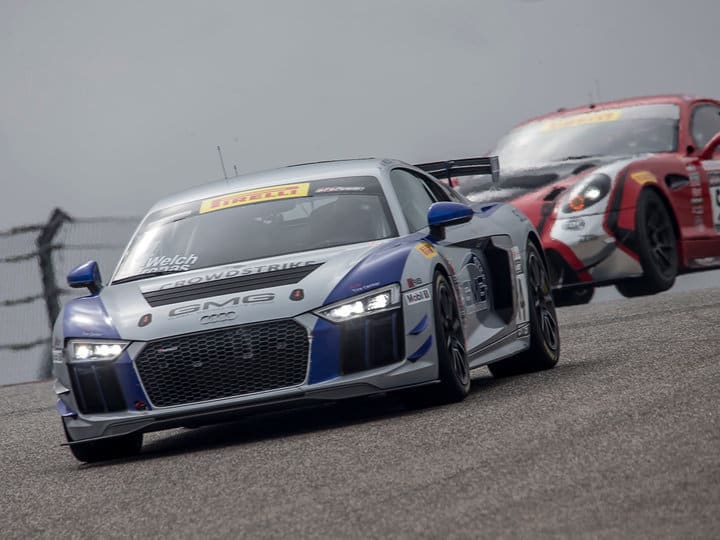 GMG Racing’s Alex Welch benefited from penalties to two of the top teams for pit time violations.  He snatched the lead away from Samantha Tan on lap 17 and held on to take his and James Sofronas‘ second SprintX win of the season.

“James [Sofronas] obviously started on pole [and] did a fantastic job,” Welch said after the race.  “He brought the car in, we had to bleed [the tire pressure] down a little bit, but I went out and the car was just great in the longer stints.  Halfway through my stint, it was running the best, so I just put my head down and ran.”

Sofronas started from the overall pole, but quickly lost the advantage to teammate Colin Braun in the No. 04 Audi R8 LMS GT4.  Before the first lap was complete, a couple of crashes brought out the first full course yellow of the race.  First, Team Panoz Racing’s Ian James and Classic BMW’s Stevan McAleer collided and spun exiting turn 5.  Shortly afterwards, The Racers Group’s Derek DeBoer and hit the guardrail, resulting in the barrier needing repairs.

On the restart, ST Racing’s Nick Wittmer was able to get around Braun to take the overall lead.  From there, Wittmer opened up a decent gap on the field that lasted until the mandatory pit stops.  Here is where the race fell apart for ST Racing’s No. 38 BMW.  Like in the GT SprintX races, the minimum time that had to be spent in the pit lane was 75 seconds.  The only difference was that tire changes weren’t allowed.

ST Racing’s time on pit road when they put Tan in the car was only 74.8 seconds.  That earned the team a drive-through penalty.  Murillo Racing’s No. 34 Mercedes of Matthew Fassnacht and Christian Szymczak that was also in the hunt got the same penalty.

With two of the main contenders penalized, it put Welch in the catbird seat.  He was able to get past Tan before she served the penalty, then drove off into the distance.

Behind Welch, the man on the move was VOLT Racing’s Alan Brynjolfsson, who won on Saturday.  Inexperience aside, he may have had the fastest car out there late in the race.  He was able to get past Tony Gaples, George Kurtz and Andy Pilgrim to move himself up to second.

Unfortunately, Brynjolfsson would not have a chance to run down Welch.  Two separate incidents brought out the second full course yellow with eight minutes remaining.  The more serious looking of the incidents saw Precision Driving’s Marko Radisic crash exiting turn 5:

The other incidents saw Adam Merzon, Dr. Preston Calvert and Harry Gottsacker all spin near the Oak Tree turn nearly simultaneously.  All four drivers were ok.

Similar to Saturday’s GTS SprintX Race No. 1, Radisic’s crash resulted in the barrier needing repairs.  As a result, the race was called early, giving Welch and Sofronas the win.

Brynjolfsson and Trent Hindman were second, followed by Blackdog Speed Shop’s Pilgrim and Lawson Aschenbach.  Kurtz and Braun were fourth, followed by Gaples and Michael Cooper in the second Blackdog Speed Shop Camaro GT4.R.  Fassnacht and Szymczak ended up ninth overall (eighth in Pro-Am) while Tan and Wittmer ended up 17th overall (12th in Pro-Am) after their penalties.

In the Am-class, Greg Liefooghe started from the class pole (eighth overall) and ran well early.  Meanwhile, ST Racing’s Jon Miller moved up from fifth in class at the start to second.

Once again, the pit stops were everything.  However, penalties didn’t change the result here.  ST Racing’s team got Aurora Straus in the No. 36 BMW and got her out on track in nearly the minimum allowable time.  That allowed Straus to pass the No. 88 BMW of Henry Schmitt and take the class lead.

From there, Straus pulled away from the rest of the Am field and elevated herself up to eighth overall.  The race ending under yellow gave Straus her second class win of the season and the first for Miller.  Straus also claims sole possession of the Am class points lead.

“The BMW M4 GT4 was perfect today,” Straus said after the race.  “It was set up really well by our team at ST Racing.  I wouldn’t change anything about the car if I could, which is a big ask for any racer here.  I caught up to the front of the pack almost immediately and, from there, it was smooth sailing and just hold the pace.”

Flying Lizard Motorsports’ Mike Hedlund was second in his Audi, followed by Liefooghe and Schmitt.  Toby Grahovec and Chris Ohmacht, who won on Saturday, ended up fourth.  Jeff Courtney was fifth.

Highlighted (and enhanced) coverage of the GTS SprintX races from VIR will premiere on CBS Sports Network on Wednesday, May 9 at 8 p.m.   The GTS teams will be in action next at Canadian Tire Motorsports Park from May 18-20.