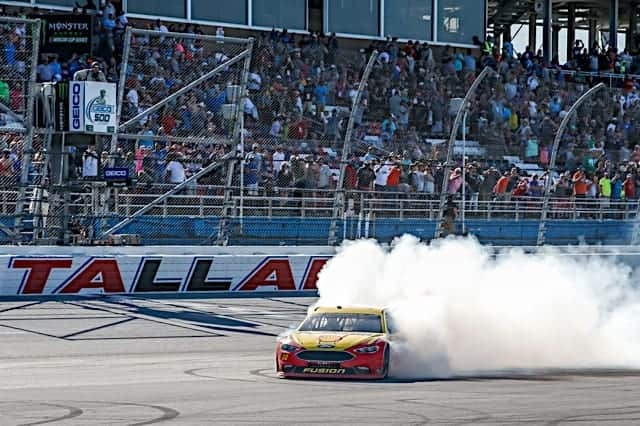 It seemed to be the Team Penske show on Sunday, much like the Daytona 500. This time, though, the dominant car went to Victory Lane.

In February, Ryan Blaney outright dominated the event leading 118 laps. But when it came down to the end, Blaney came up short.

On Sunday, the Team Penske show returned to Talladega Superspeedway, with different characters for the GEICO 500. Blaney’s teammates Joey Logano and Brad Keselowski put on a clinic for the field, leading a combined 91 of the 188 laps. Logano did everything he needed to do and wound up with his first victory since Richmond Raceway last April.

“The Fords dominated today,” Logano said. “I am so proud to be in a blue oval with Roush Yates motors under the hood. That is a huge deal. Teamwork was a big part of it as well.

Kurt Busch, who was just mere inches away from winning the pole on Saturday, brought home a second-place finish.

“It was one of the best Fords I have ever had here and it was fun to race it and lead some laps and be right there but I just didn’t get the job done,” Busch said. “The [No.] 22 out-foxed us and we didn’t get the push from behind to go on offense at the end but a top-five day so I can’t really complain.”

The race began with one of the front-row starters on the front row. Busch had to change multiple items to get the team communications back on track and ready to go. Busch jumped back up front and led the field alongside teammate Harvick.

On lap 13, Alex Bowman took the lead from Harvick. The laps led would be his first since the Daytona 500 in February. Bowman tried to pass some lapped cars, and with some help from cars behind him, Darrell Wallace Jr. took the lead.

The Team Penske domination began on lap 44, when Keselowski took the lead from Wallace. Keselowski would then never look back and earn the victory in stage one.

Stage two would kick off the chaos as a total of seven new drivers would lead at least one lap. On lap 73, Jamie McMurray got into Erik Jones’ No. 20 machine and hooked him into the outside wall and into Trevor Bayne. Bayne then came back down the track, clipping and spinning Martin Truex Jr. As McMurray was coming back down, he made contact with his teammate Kyle Larson. Everyone except McMurray and Truex were left on the hook and out of the race.

Logano took the lead shortly after the accident but had to battle with Ford teammate Paul Menard and Denny Hamlin for the stage two victory. Menard passed Hamlin for the lead on lap 105 and ran away with his first career stage victory.

Byron led the field to green to kick off the final stage of the race. Busch showed his face upfront again taking the lead from Byron. Laps began to tick away and intensity was brewing. On lap 156, Timmy Hill lost an engine setting the pack back up to be together.

On lap 167, the second big one took place knocking out many of the contenders including Keselowski, Menard, Michael McDowell, William Byron, and others. The incident began when Jimmie Johnson and William Byron swapped air. It also collected Menard who then went back up the track, hitting Clint Bowyer in the process. Menard continued along the wall and McDowell ended with no place to go.

Blaney went to slow down and got rammed into by teammate Keselowski. As a result, he hit the outside wall hard. Kasey Kahne, Austin Dillon, AJ Allmendinger, Wallace, Joey Gase and others were also collected in the crash with only a few left standing for the finish.

“We just got the bottom lane rolling decent and kind of got shuffled back,” Menard, who won stage two, said. “It is so hard to get back forward. We went for the top and that wasn’t working so we went to the bottom and started going forward, but the [No.] 48 just cut across the [No.] 24 from what I saw and caused a big wreck.”

Though the race wasn’t over on lap 147, the lead wouldn’t change from then on out and Logano would slam the door shut on his winless streak.

“At the end, you are racing and don’t know what will happen, you just hope to get in the right lanes at the right time with the right moves,” Logano said. “It is always exciting to win at a superspeedway, especially Talladega because you never know you’ve got it until you cross the line. After waiting a full year since our last win it feels so good to get back in Victory Lane and get our [No.] 22 Shell Pennzoil Ford into the playoffs. It feels really good to get those playoff points and now we will make a run at a championship.”