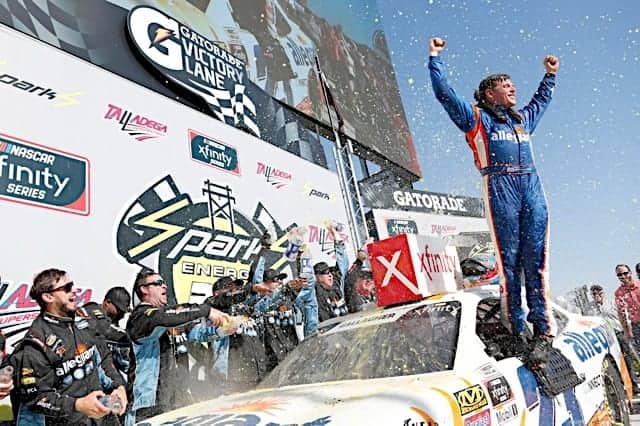 Whenever NASCAR takes to the high banks of Talladega Superspeedway, there’s going to be fast speeds, big wrecks and possible first-time winners. All of that, along with a plethora of pit strategies, was included in Saturday’s Sparks Energy 300 as Spencer Gallagher won his first NASCAR race, leading just the final lap.

Gallagher started the 300-mile race in third, just behind a pair of Chevrolets in Daniel Hemric and Elliott Sadler. By the end of the opening stage, the No. 23 machine had fallen to 11th, missing out on stage points.

However, dodging a multi-car crash in the second stage that took out a handful of drivers, Gallagher jumped up the scoring pylon, finishing second. When the final stage began, the No. 23 car was back in traffic.

For the final 35 laps of the race, it looked as though Justin Allgaier was going to walk into Victory Lane, having upward of 25 seconds on the field, due to a differing of fuel strategies. With eight laps to go, Hemric blew a right front tire, bringing out the race’s final caution.

Before the race could resume, Allgaier ran out of gas, as did Austin Cindric, who had taken over the race lead. With two laps to go, Gallagher restarted the event in fifth, but by the end of the first lap was side-by-side with Tyler Reddick, as the No. 23 scooted to the lead on the white flag lap, blocking from the yellow line to the wall, en route to Gallagher’s first career victory.

“I was thinking I hope to hell this works,” Gallagher said of blocking on the final lap. “It didn’t seem real for a while, that whole last lap was kind of a dream. You hear your spotter talking to you in the background, but all you’re really doing is looking out your mirror. It’s always wild — the last lap at Talladega — but we brought it home, baby. We got it done.”

If you read this column, you know that I don’t like watching Cup Series drivers steal the show, taking wins away from XFINITY Series regulars. However, the Drivers Only broadcast stole the show, and I’m not complaining.

Right from the beginning, it was entertaining as hell, as play-by-play man Kevin Harvick was late, following his pole-winning run in Cup qualifying. That meant, Joey Logano and Clint Bowyer had to carry the show, as Harvick got to the booth just prior to the green flag.

A trio of young guns filled in as pit reporters, in which each played their role perfectly. Darrell Wallace Jr. would constantly take shots back and forth with Harvick, while Erik Jones was more on the serious side. Ryan Blaney did a report on Cindric’s car without looking at the camera because he was watching the race on the big screen.

“Hey Blaney, you can look at the camera,” Harvick said.

This broadcast filled with actual laugh out loud moments and is something Fox Sports should consider more often. In its inaugural attempt last year, the race was held at Pocono Raceway, which is a rather tame racetrack. Not so much the case at Talladega, so this one gets two thumbs up.

The racing was so odd, that for the first time probably in the history of NASCAR, one of the broadcasters (Bowyer) actually admitted on television, he was hoping for a caution late in the race. He got it, and the ending to the event delivered, as did the Drivers Only broadcast.

Well that was fun! Appreciate @NASCARONFOX for allowing us to do that. The race had a little bit of everything. Fuel mileage strategy, big runs, blocking, and it all came down to the wire with @23SpeedRacer getting his first win. Good times!!! ?

Hemric blew a right front tire with eight laps to go, thus bringing out the caution. Allgaier, Cindric, and a pair of JD Motorsports cars were attempting to go the distance on fuel, last pitting with 48 laps to go. When the caution flew, the JDM cars pitted, and the No. 7 car ran out coming to the green flag.

That added an additional lap of caution, which ran Cindric’s fuel cell dry, as the field came to take the green flag. The No. 22 team went from a shot at winning the race and the Dash 4 Cash prize money, to finishing one lap down in 30th.

For a track that always has massive crashes, thankfully this race was relatively clean, with only one multi-car incident.

Early on in the second stage, Shane Lee, who was making his second career XFINITY start, got into the rear bumper of Dylan Lupton, spinning the No. 28 car in front of the field. That triggered a six-car incident, which included Ryan Truex, Ty Majeski, Chad Finchum and Spencer Boyd.

Lee was the only driver that was able to carry on, bringing the No. 3 car home in 15th after getting shuffled out of line during the overtime finish.

For Lupton, it’s his fifth DNF in eight races for JGL Racing this season, four of which has been crashes.

By no means does Ryan Sieg Racing have the budget compared to JR Motorsports, Joe Gibbs Racing, etc., but every time NASCAR heads to a restrictor plate track, Ryan Sieg is one to keep your eyes on. This time, not only was it Sieg, but also his teammates JJ Yeley and Jeff Green, who finished in the top 15.

For the trio of teammates, the goal was clear during the first two stages — keep the car clean. In the first stage, Sieg finished 18th, while Green was 27th and Yeley 28th.

Collectively, the three team cars ran together for the most part in the second stage, as Green ended in 23rd, Sieg 24th and Yeley 26th. These cars had all lost the lead draft, as much of the back-half of the field did, playing it conservative.

But once the final 63 laps began, it was go time, especially when the race’s final caution came out with eight laps to go.

All three cars were on the lead lap, and coming to the white flag, it was Green and Sieg piloting the outside line, getting inside the top five. When the checkers flew, Sieg was sixth, his best finish since his runner-up effort at Iowa Speedway last June. Yeley was just outside the top 10 in 11th, and Green came home 13th.

We run up front every year at Dega and then get wrecked. Gonna have to change our strategy this weekend https://t.co/WwUiNPF2vP

Heading into Talladega, these three drivers had run in all eight races, as RSS is looking to run three full-time teams. Its best finish in those eight races? An 11th in the season-opening race at Daytona.

“I have never even been able to race for a win at a speedway yet so it is nice to get that experience and hopefully I can use it next time.” – Cole Custer

“The pit road thing was a disaster. They wrecked in front of me and I was trying to get stopped to miss them wrecking and locked them up. I don’t know. Daytona is better to us than Talladega for sure. One of these days we will figure out the Alabama luck. I guess I have some bad karma down here.” – Ryan Reed

“Went from hero to zero, right? We were in position to get the Dash for Cash and maybe a win regardless of what happened to the 7. But hey, we were in contention. We can’t hang out head too low, it is just one of those deals.” –Austin Cindric

Watching a race at Talladega is always filled with hold-your-breath moments, but Saturday’s race was a bit different. The first stage was filled with single-file, against the wall racing, and much of the same can be said for the second stage.

The final stage was something that is very rare at a superspeedway race, especially Talladega. It was reminiscent of the July Daytona race in 2003, when Greg Biffle won his first career Cup Series race on fuel strategy, though this race was saved by a caution.

It was one of the cleaner restrictor plate races in recent memory, which is good. The racing, eh, the last two laps made it manageable. But it’s always good to see a first-time winner, which is what Talladega is known for.

The XFINITY Series heads to Dover International Speedway next weekend for the first of two visits to the Monster Mile this season. This will be the fourth and final Dash 4 Cash race of 2018, and the last race for a while that no Cup Series regulars will be in the field. The green flag is scheduled to wave shortly after 1:30 p.m. ET.

Much more interesting to watch an Xfinity race without the Cuppers stealing all the thunder…and prize money. I haven’t noticed a huge difference in the size of the ‘crowds’ with out without the Cup drivers, which makes ‘bigger crowds’ justification a non starter. I say if the cuppers love racing so much that they just can’t sit outa lower series race, they should have to drive for a team with NO Cup affiliations at all.

I BET THOSE XFINITY DRIVERS ARE LOVING THESE RACES WITHOUT THOSE CUP DRIVERS TAKING THE TROPHIES…..