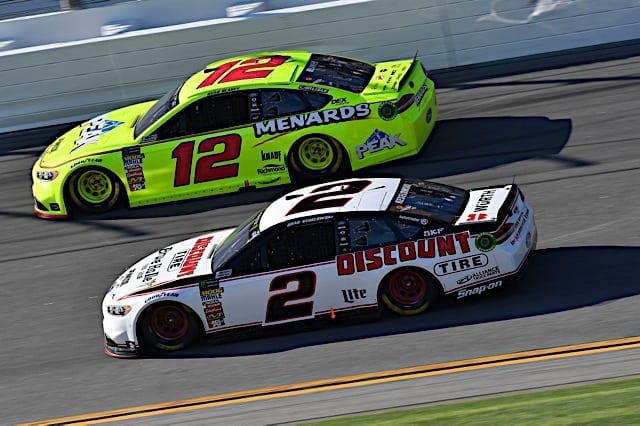 ONE: Fords Fight To The Front At A Plate Race… Again

Joey Logano won the battle Sunday (April 29) at Talladega, but Fords won the war. The Monster Energy NASCAR Cup Series race was a master class in a manufacturer sticking together in order to keep their place at the front.

Team Penske was first in class as Logano, Brad Keselowski and satellite driver Paul Menard led 99 of 188 laps. But they weren’t the only ones staying together. Stewart-Haas Racing had Kevin Harvick and Kurt Busch, veterans acting like a two-car freight train until the final laps. In all, Fords took six of the top seven spots with Logano on cruise control during most of an uneventful 17 laps after the final caution.

It was an old-fashioned whipping, beginning to end, from successful stage one pit strategy (short-pitting) to keeping it clean late in the race. Even at certain points in the draft, top contenders naturally shuffled back you never felt like this race was out of Ford’s control.

“I think it was really a well laid out plan when you think about the way the Fords ran all day,” said winning team owner Roger Penske. “We talked about it with the teams.  People worked with each other.  I think that makes a difference.”

The Blue Oval crowd have now won six straight at ‘Dega with Team Penske taking five. And their patience with each other? It had others paying attention, especially those Chevy and Toyota drivers who missed out.

“I thought for sure one of them wanted to win a little worse than what they did,” said third-place finisher Chase Elliott. “They were being very patient with one another and I was surprised by that. If it was me, I feel like I would have wanted to try or do something. Those guys weren’t having it. I was trying to move forward and make a lane and push and they were not interested in advancing.”

Content or simply incapable of catching Logano, Ford drivers built a wall to settle the race among themselves. It’s that type of manufacturer chemistry that has eight of their drivers in playoff position despite running the oldest model.

“That’s a big deal for Ford to show the strength that they got,” Logano added. “But also the teamwork, it’s a big deal for us. We do a lot of team bonding trips, different things.  That stuff starts to show here more and more as we grow closer.”

TWO: Taking The Thrill Out Of Talladega

Handling trouble at Talladega? Sunday’s race looked like an early 1990s race from Daytona instead of the superglued together, 40-car draft we’re used to seeing. Early pit stops spread the field in stage one, causing extended single-file competition and that pattern kept popping up through the race’s final segment.

In all, there were just 25 lead changes, the lowest for a Talladega race since 1998. Logano led the final 47 circuits and had only a dozen cars trailing him despite 22 on the lead lap. A split pack despite a short stint after the race’s final caution showed you how much handling came into play. No ride height rule this season meant no automatic car control that allows drivers to race wide open here.

A last-minute change in the restrictor plate, down 1/64th of an inch after Jamie McMurray’s Friday flip didn’t help. Teams didn’t have on-track time to react, although you would think slower speeds would help ill-handling race cars, not hurt them.

A few drivers, including Ricky Stenhouse Jr., applauded the adjustments. But you wonder what a packed crowd at Talladega was feeling. I’m reminded of when the old Bristol was carved up for cars to run side by side. Sure, the intentions were pure (better racing, less bumping) but it’s not what the majority of NASCAR fans wanted. Bristol to them was about crunching fenders, frayed tempers and and bump and runs.

Talladega, as dangerous as pack racing can be, has come to define white-knuckle competition. It’s the one track on the circuit where everyone becomes inescapably glued together. And while the drivers may not like it, that three and four-wide competition is what puts fans in the seats down in Alabama. Was this type of spread-out action, fun (and safer) for the drivers also entertaining enough for those in attendance?

Ratcheting down those expectations will be difficult. Meanwhile, there’s no indication NASCAR will change this package for the fall. So it’ll be interesting to see if fans vote with their wallets, as they did at Bristol, after one of the few packed houses we’ve seen at the track this season.

One year ago, Logano earned his last win at Richmond. Days later, he had it stripped with an “encumbered” penalty over a rear suspension violation in post-race inspection. The decision left the No. 22 team reeling, slipping into a slump from which they never recovered.

But 2018 has been a different story. Logano has washed off the stench of a missed NASCAR playoff appearance with nine top-10 finishes in these first 10 races. Not only is he second in points, he’s sneaking back into the championship-contending realm he had lived in for much of the past four seasons. Gone are the questions, answered by the unyielding chemistry between Logano and crew chief Todd Gordon.

“Obviously a lot of people ask that question millions of times:  What happened?” he said Sunday. “It’s still the same team.  Not much has changed.  It’s the same core group that’s made two amazing fights to almost win a championship.  We stuck together for that reason.

“Any time you go through times of trial like that, that’s very challenging for everyone.  If you can get through that together, you’re stronger.  For that reason I feel like my team’s never been stronger.”

Sunday’s top-10 finishing order proved just how fickle restrictor plate racing can be. The day’s one big wreck, swallowing up 14 cars took out Daytona 500 winner Austin Dillon. The runner-up finisher that day, Darrell Wallace Jr., also got damage and couldn’t keep up with the lead draft.

Going down the list, this year’s Daytona 500 contenders were nowhere to be found up front at Talladega. With Logano (fourth) the notable exception, just one other driver who ran top 10 in NASCAR’s Super Bowl (Ryan Newman) was able to repeat the feat on Sunday.

Chris Buescher came close (fifth and 11th) but even he was realistic about how much plate racing performance is outside your control.

“It’s still hit or miss,” he said. “It’s a little bit of luck involved with just being out of that stuff. Definitely, a more white-knuckled race than usual here. Very on edge.”

FIVE: Ugly Day For Underdogs… With One Exception

Finally Sunday, the way Talladega unfolded made it rough for underdogs to excel. A smaller lead draft with handling in play made it more difficult for smaller teams to keep up. Early pit strategy also caused slower, part-time crews like the No. 92 car and Timothy Peters to lose the draft. So many cars lapped in stage one made it impossible for many of them to catch up.

But in a race where nine top-10 cars came from the bigger teams David Ragan found a way to break through. His Front Row Motorsports car worked well with Stenhouse and they tag teamed their way up to a sixth-place finish. Five years after FRM’s only win, the No. 38 accounted for itself well as Ragan tries to build a top 30 cushion just in case a miracle happens come Daytona in July.

Think it can’t happen? Ragan was sixth there last July. He now has four top-10 finishes in his last six plate races, an impressive number considering his underdog status. That’s all his top-10 results since returning to FRM after the 2016 season.

Several people are in the media are complaining about fewer lead changes at Talladega this weekend. However, those massive lead change numbers just go to show how meaningless each lead change is. However, fewer lead changes mean each change has more meaning. Aw darn, no last lap pass for the win. If every race is decided on the last lap, then why watch the any of the laps that come before? And since when do we complain about handling mattering in a race? If handling doesn’t matter then it isn’t an automobile race.

Drivers cooperating with each other and team racing – I know that is what I am always hoping for when I watch a race.

You keep using that word. I do not think it means what you *think* it means.

The obvious problem with plate racing is that no driver can pass without help. NASCAR is not and never has been a team sport. There is only one trophy for winning a race, one trophy for winning a championship. If it “takes a village” to win a plate race, then no member of that village should get the trophy, the money or the points. Take all the jokers who helped Joey and split the money and points among them. Send the trophy to Dearborn.

Or stop running these fake events and calling them races.

I have a feeling we will see a different Daytona race in July and Talladega race in the fall as teams keep adjusting to the no-ride height. I think it is pretty obvious that handling is key again, even at Talladega and you have to setup for that. There were a lot of evil driving cars, especially early on Sunday. If you go for the pole, your taking a big risk for the race.

Probably the worst ‘Dega race I’ve seen in 20 years but still more entertaining than the intermediate tracks. Handling coming into play can be a great thing but not when it is due to the rules hampering the ability of the cars to be stable enough where moves can be made by a faster car. Multiple cars needed to make a move on another is just flatout sad (remember “tandem drafting” in 2011 but hey at least 2 cars could get runs and pass another 2 cars). The lead car breaking the air should not have such an advantage (cars being equal as they are) that the slip stream is negated. General consensus doesn’t seem to be favorable to what was seen on Sunday. I think its time to rethink what super speedway racing should be and get away from “plate” racing. Indycar seems to have done it with the 500, think its time for Nascar to go after a real solution.