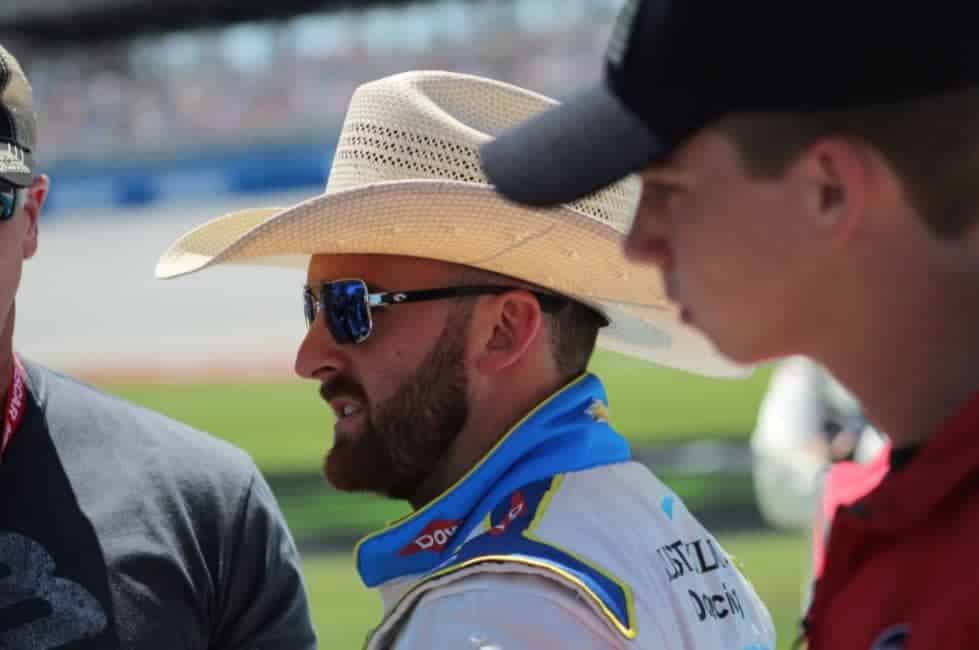 As Kyle Busch and Kevin Harvick have taken the Monster Energy NASCAR Cup Series by storm to start the 2018 season, no one is surprised. Two of the best drivers, competing for two of the top organizations in the sport, have simply dominated the first portion of the year, and not much seems to be changing.

However, there are a few drivers who are starting to peak as the weather begins to warm up.

Joey Logano’s triumph at Talladega Superspeedway might just be the start of Team Penske’s impending dominance. None of its three drivers sit worse than eighth in the series standings, and they’ve led a combined 704 circuits through the opening 10 contests.

From Logano to Brad Keselowski and Ryan Blaney, this organization is beginning to heat up. But does it have the speed to compete for wins on a weekly basis like its Ford counterparts at Stewart-Haas Racing or Toyota rivals at Joe Gibbs Racing? What is Team Penske missing — if anything — as the playoff grid fills up?

Someone who is already locked into the playoffs is Austin Dillon, who took home the checkered flag in the season-opening Daytona 500. Dillon’s Richard Childress Racing squad has struggled, though, since the biggest win of his career.

The No. 3 team sits 17th in the standings, earning just one top-10 finish at Auto Club Speedway since the first race of the year. While Dillon has been circling around the top 15, he’s missing just a bit of speed to compete for top 10s. Will he be able to turn things around by the start of the playoffs?

Q: Is Team Penske being overlooked as title contenders? – Deborah A., Charlotte

A: Absolutely. Team Penske is going to have at least one — maybe even two cars — in the final round of the playoffs at Homestead-Miami Speedway.

Logano has nine top 10s in 10 races this year, an incredible rebound after struggling for much of the latter half of the 2017 season. His 6.7 average finish is astonishing, only worse than Busch’s average of 5.7 to start the year.

While Keselowski only has two top fives and five top 10s, the speed is certainly there. The luck, however, not so much.

Keselowski should have been a contender for wins at Bristol Motor Speedway and at Talladega this past weekend. But things don’t always turn out like you expect them to, and that’s what’s happened to the white deuce. Keselowski, though, has consistently been the quickest of the three Penske cars, recording 136 fastest laps in 3,235 laps completed in NASCAR’s premier division this year.

Meanwhile, Blaney has been consistently running up front as well. His dominance in the beginning stage at Bristol was the best we’ve ever seen him. If it weren’t for getting caught up in someone else’s mess, we might have seen arguably one of the most dominating efforts in Bristol history.

Instead, we were left wondering why Blaney’s luck has been absolute garbage this year. He is in top-tier equipment and is ready to compete for a title. His performance in the Daytona 500, along at Martinsville Speedway, proved he is ready, leading a combined 263 laps in those two contests alone.

Though all of Penske struggled at ISM Raceway, with Keselowski finishing a team-high 15th, the organization has considerably turned things around, even without Logano’s Talladega victory.

The team has three cars sitting comfortably in playoff position. The wins are coming, but they might take some time.

I’ve been saying that once Blaney wins one race, he’s going to put a few more into the win column. If the consistency is there, the wins will start to come, too.

Now that Logano has a triumph to add to his resume, it’s only a matter of time before his teammates start to follow suit. Expanding to three cars certainly could have put Team Penske back a bit, but that is not the case here as the organization is ready to continue its winning ways.

A: Less than two years ago, it seemed like Dillon was a budding star. Even with his Coca-Cola 600 win last year, however, the No. 3 team’s performance was not as stellar as it could have been.

Dillon had only four top 10s throughout the 2017 season, a decline from 13 the previous year. RCR was not putting fast racecars on the track, and it showed with Dillon’s average finish of 18.6 last year.

While that number is up to 17.6 through the first 10 races of 2018, Dillon sits a mere 17th in the standings after winning stock car racing’s biggest event. It is important to note he is off to a better start than last year, when he sat 23rd in points at this time. But 17th is still seven positions back from where Dillon sat only two years ago, his third full-time Cup season.

As we enter May, Dillon is looking to click the reset button. Crew chief Justin Alexander and he have won two huge races within the past year. But we still haven’t seen the consistency that Dillon had in 2016. Is the magic gone?

Well, not so fast. Literally.

When RCR dropped the No. 27 team as Paul Menard departed for Wood Brothers Racing, all eyes were on Dillon and teammate Ryan Newman to step up their performance. But the new Chevrolet Camaro has put the entire bow-tie camp behind, and RCR is no different in that regard. From Hendrick Motorsports to Chip Ganassi Racing to RCR, all of the Chevy teams are struggling to get things going.

The only Chevrolet driver sitting inside the top 10 in the Cup standings is Kyle Larson, with Alex Bowman and Jimmie Johnson hanging onto spots in the top 15. Newman, coming off a year that saw a respectable seven top fives and 13 top 10s, now sits 16th in points ahead of Dillon.

But Newman has led 40 laps this year. Dillon has led one — the final circuit in the Daytona 500.

As the Chevrolets begin to turn things around, Dillon will as well. His lack of performance since the season opener shouldn’t be shocking, either.

RCR is in the middle of rebuilding its organization. It is trying to get back to its winning ways, and the fact that the No. 3 car won the Daytona 500 can make up for any lack of performance throughout the rest of the year.

But that isn’t the standard RCR preaches. This is a team that used to compete for championships, not for 15th-place finishes. If Dillon can get this team back into the top 10 on a weekly basis, it would be a huge boost for fans looking for a bit of nostalgia, wanting to see the legendary No. 3 car back up front.

Dillon’s Daytona 500 victory might be a one-hit wonder for now, but as RCR lands back on its feet and begins to understand the new Camaro body just like Toyota teams struggled to keep up with the 2017 Camry, expect to see Dillon back in his 2016 form — and maybe even better than that, now that RCR is focusing on only two cars.

“What happened to Austin Dillon”? Absolutly nothing. You all hyped him, from the last race BS in XFINITY as “CHAMP”, NASCAR purposefully screwing SAM HORNISH, to easing the EARNHARDT NUTTERS into liking Dillon in the 3 car in Cup. And don’t ya know it…who got the pole that year!!!! LOL. Besides hitting ARIC to get the Daytona 500…ahem..win. WHAT HAS HE DONE that was warranted a “what happened”. NOTHING! He is as empty as those stupid cowboy hats. He is who he always has been, not much. IMO.

he was the survivor of the mayhem at daytona. chevys have and seem to continue to struggle.

He’s a second tier driver. He hasn’t ever impressed me. If the planets align he can win, otherwise he’s doing about what I would expect. Bottom half of the drivers on the top tiered teams.

Nothing has happened to Austin Dillon. He was never that good. His win at Daytona was a combination of luck and wrecking the leader, neither of which puts him in the top tier of drivers. It continues to amaze me that some FS writers still believe wins at plate tracks actually mean anything!

Austin Dillon is exactly who anyone who has been watching races for years know he is. He needs a lot of luck to win. So he has won a fuel mileage race. So did someone else in Japan and milked it for years. So he won a restrictor plate race by drop-kicking the car that could have won the demo derby into the wall in front of most of the field. Karma will be a bitch for him.