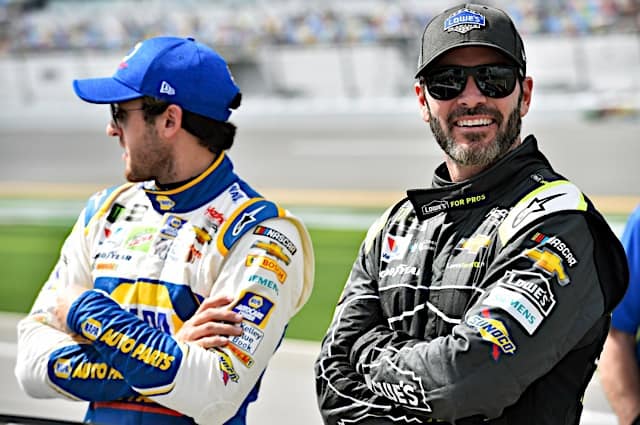 While Larson has yet to score a Cup win at Dover International Speedway, he has led 463 laps at the 1-mile oval.  That’s good for sixth among all active drivers, and Larson has done it in just eight races—that’s between eight and 26 fewer races than anyone else in the top 10 in that category. Larson has led more trips around Dover than Kurt Busch, Denny Hamlin or Brad Keselowski, among others, and his 7.9 average finish is the best of any active driver with more than five starts.  Those are very promising numbers for Larson, whose 2018 season has been an exercise in up-and-down.

Larson is 10th in points, best of any Chevrolet driver, but also has failed to finish two of 10 races and has finished on the lead lap just five times this season.  Larson has led 254 laps this year, more than a couple of guys with wins, and has certainly looked capable of winning at times but has yet to pull through.  Of the winless drivers in 2018, he’s a solid bet at Dover.

Elliott has to win sometime, right?  He’s finished second a total of eight times in his career, so all that remains is to seal the deal. And Dover might be the place to do it.

Elliott has four top-five finishes at the Monster Mile in just four Cup races.  His average finish—without a win—is 3.2. While four races isn’t quite enough to proclaim him top dog at Dover, he’s been strong every at outing. In four XFINITY Series races, Elliott has a 5.2 average finish to go with a fourth place in his only Camping World Truck Series start at the track.  The worst he’s ever finished at Dover in a NASCAR national division is seventh. It doesn’t get more consistent than that.

What hasn’t been as consistent is Elliott’s 2018 season. Yes, he has five top 10s, but it’s been feast or famine; he has three finishes of 29th or worse, and two of those were early exits. Still, he’s been red-hot the last couple of weeks, finishing second at Richmond Raceway and third at Talladega Superspeedway. This could finally be the week where it all comes together for No. 9.

Keselowski does have a Dover win, which came in 2012. He’s also earned a couple of poles along the way. He scored a top 10 the last time the Monster Energy NASCAR Cup Series visited the Monster Mile, finishing 10th, and his 13.6 average finish is certainly nothing to sneeze at.

Dover is a track that can either be a driver’s best friend or worst enemy, and Keselowski has fallen into the first category, with just one DNF in 17 starts. The track works well with his aggressive style, because a driver who is willing to take everything they can get and brave enough to put their car on the ragged edge is the kind of driver who will be successful—but that’s easier said than done.

Like Larson, Keselowski’s 2018 has been a bumpy ride. He has led some laps, grabbed a couple of top fives and five top 10s while sitting sixth in points. Keselowski’s advantage this weekend could well be the Ford he drives; the make has been responsible for five wins in 10 races this year and has shown speed at every type of track so far.

His Team Penske teammate, Joey Logano, won at Talladega last weekend, so the organization is hot right now as well.

The stats are certainly among the best, but they come with a disclaimer of sorts; Newman’s last Dover win was in 2004. His most recent pole came in 2007. Newman has earned three top-10 runs in the last 10 races at Dover, but that does include a fourth in the spring race last year.

Newman’s 2018 season is neither brilliant nor terrible, but a win would be a boost. He’s currently 16th in points but would be the odd man out in the playoff tally right now because Austin Dillon has a win and is 17th, bumping Newman. But Newman’s a driver whose consistency has served him well as he’s gotten older, often securing a playoff berth with one win or on points, and his three top-10 runs are better than Dillon’s two.

Like Larson, Newman’s biggest obstacle could be his Chevrolets, as the Camaros just haven’t been competitive this year when it counts. Dover, though, isn’t the same type of aerodependent track that many others this season have been, and a driver with Newman’s experience and style could be rewarded with a strong finish.

As dismal as 2018 has been for the seven-time champion, he’s a favorite this week simply because of his stellar Dover record.  Johnson’s 11 wins are by far the most by an active driver; the next drivers on that list have three. They’re also good for the all-time Dover wins record, ahead of the likes of Richard Petty and Bobby Allison, so it’s safe to say Johnson has Dover figured out.

It’s been a nightmare of a season for Johnson, who has more DNFs (two) than top-five finishes (one). He has to have Sunday circled on his calendar, because despite the collective struggles of the Chevrolet Camaros and his own difficulty in adjusting to the lighter, lower-horsepower cars the Cup Series runs now, it’s still Dover. Johnson has made the Monster eat out of his hand 11 times. Odds may still be against the No. 48, but nobody tames this monster like Johnson, so he’s still in the conversation.