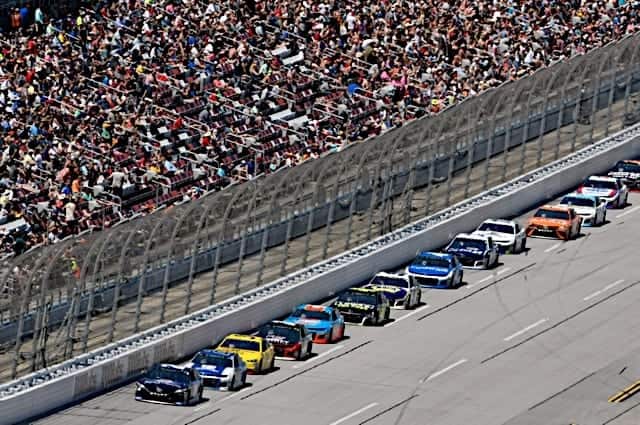 Talladega Superspeedway has a reputation as a wild, unpredictable place where anything can, and usually does, happen. This reputation comes from years of photo finishes and four-wide dashes to the finish line. The grandstands were adequately full on Sunday, and I bet those folks were expecting another classic to unfold.

They’re still waiting. They’ll continue to wait until we try again in October because there was nothing wild about the final laps of the GEICO 500.

Sure, there was a pair of multi-car crashes, but that doesn’t mean it was a good race. I’d even venture to say it makes the finish worse by eliminating handfuls of contenders.

The crashes have been so constant that I’d speculate that the ever-present threat of the Big One probably has drivers hesitating a bit. How many times does a car have to be brought back to the garage on a flatbed for a driver to start making moves based on what will keep them from ending up junked?

No one can make the drivers try to pass.

The decision to make a move or stay in line ultimately lands on the one holding the steering wheel. But NASCAR could probably do a bit to make passing easier and more enticing.

I’m not a proponent of changing things for the sake of change. But if something isn’t working, then action should be taken to improve the on-track product. We’ve had a variety of different packages over the recent years, with an assorted level of results. But from October of 2005 through October 2011, the Monster Energy NASCAR Cup Series raced at Talladega 13 times and each race had at least 42 official lead changes. Some even got up into the eighties. During that span, there were three different generations of cars used, including the abysmal Car Of Tomorrow.

Yet all they could muster on Sunday was a paltry 25 official lead changes.

There were more than that last fall at Texas. Hardly a hair-raising classic. Worse yet, race winner Joey Logano led the final 42 laps. Nearly the last quarter of the race was run with no change at the front of the field. While it’s possible that the drivers were holding back for fear of being shuffled back or wrecked, it’s more likely that they simply couldn’t pass.

The cars ran incredibly fast during practice and a rollover crash by Jamie McMurray led NASCAR to mandate a smaller restrictor plate. This loss of power hindered the ability of cars to generate enough momentum to make strong runs to pass each other. The crash depleted field late shrunk the size of the pack, so no driver could muster the ability to take their shot.

It seems like a new rules package may be in order.

The cars need to be slower from an aerodynamic standpoint so that way the driver has some power at their disposal. Additionally, if the cars make a bigger hole in the air, it would enhance the effect of the draft. You know you have the ideal setup when none of the drivers wants to be the leader at the white flag.

The best package I’ve seen was the 2001 aero setup. The roof spoiler played a huge role in how those cars handled in the draft. Passing was nearly constant and lead changes were higher than they had been in years.

For example, the four restrictor plate races in 2001 had a total of 132 lead changes between them, an increase of 37 from the previous year. The only reason that package didn’t last is the large pack is created resulted in massive multi-car accidents.

However, we’ve learned over the years that multi-car crashes are simply part of Talladega events. No rule change is going to prevent that. Better to cater to the people who are watching the race at home or on television.

Isn’t that who the sport is supposed to be entertaining?  – Frank Velat

Let’s settle down with all of this talk about changing the current restrictor-plate package; it doesn’t need to change just yet.

We’ve only seen this package in use for three races: The Clash, the Daytona 500 and this past weekend’s race at Talladega. If NASCAR completely changed its packages based on a three-race sample size, then the intermediate track package would’ve been completely overhauled after the race at Texas Motor Speedway this year.

People griped about The Clash and Talladega, but let’s not forget that the Daytona 500 was a fantastic race with plenty of comers and goers. Austin Dillon didn’t lead the last 42 laps to win that race — he only led from Turn 3 to the finish line on the last lap.

The Clash certainly didn’t live up to that type of racing, but it’s always been such a short race with next to nothing on the line, making it hard for it to find a rhythm or produce amazing racing.

But Talladega was a good race. The problem is that we longtime observers of the sport have these preconceived notions that every Talladega race will have tons of lead changes and a side by side finish; that is not always the case.

Frank mentioned the restrictor plate races from 2001 being good, but for the few years after that, plate races consisted of everyone following the Dale Earnhardt Inc. cars around for 400-500 miles (or 499). In Dale Earnhardt Jr.’s last two wins at Talladega and Daytona in 2015, nobody was able to get anywhere close to him in the final laps.

Aside from The Big One, nothing really happened in those races. Even some of the races that did have photo finishes weren’t great races, but just great finishes. See, I think that most people struggle to separate a great race from a great finish.

The 2003 spring race at Darlington Raceway, for example, had a thrilling end. People forget though that before 25 to go, Jeff Gordon was stinking up the show before having a problem. That was a great finish, but not a great race.

This past weekend at Talladega didn’t have a great finish, but it was a good race. I’ve never seen a restrictor plate race where cars struggled so much with handling; it was awesome and it was a result of the current package.

For the first time, it didn’t look like these cars were just stuck in a traffic jam and drivers were biding their time for the end. Instead, you could see the drivers fighting the steering wheel and clawing for every position. These are some of the greatest drivers in the world, and we got to see their talent on full display.

I was on the edge of my seat for most of the race because the cars were handling horribly, yet drivers kept forcing it three- and sometimes four-wide. At any moment, it seemed like chaos would ensue, but it rarely did because the drivers were that good. Have we felt that sensation at any of the other track configurations this year?

I agree with Frank that shrinking the hole on the restrictor plates and slowing the cars down about five miles per hour did hurt the ability to pass. But the problem with the move was that it was made after all the practice sessions were done. If the drivers could have had practice time with the new plates then maybe they would’ve had a better handle on the cars and could’ve figured out better ways to pass.

Regardless, Talladega was still Talladega, a wildly entertaining wildcard in the middle of the season.

Had there been a late caution and an overtime double-file restart, then we might’ve gotten that photo finish and everyone would recognize just how good of a race it was.

We’ve got two more restrictor plate races this year, not including The All-Star Race. Let’s wait and see how those two races go before we make the teams spend a whole bunch of money making even more changes.  – Michael Massie

I completely disagree with Michael. the whole first stage was nothing but a formula one race on an oval with follow the leader. The second stage wasn’t much better once Keselowski got a speeding penalty. and the final stage was the same as the second once Hamlin got his two-in-a-row speeding penatlies. Those two seemed to have figured it out. and were almost able to pass at will.

If the drivers are so god-like in their abilities then why do they need tons of practice to learn the new package? The only reason I was on the edge of my seat was because my legs fell asleep when I woke up from my nap because the race was so boring.