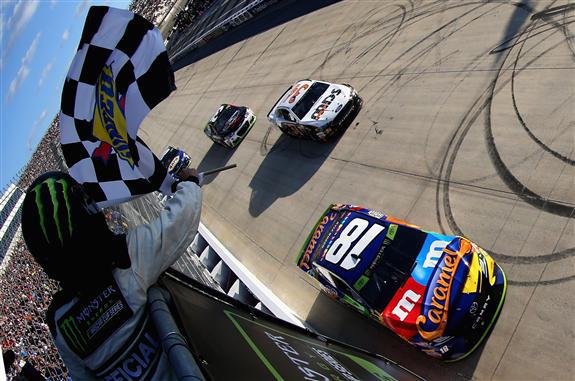 Never tried FanDuel? Take a look this weekend by playing in our FREE Frontstretch FanDuel daily fantasy NASCAR contest! Go to fanduel.com/frontstretch for a chance to play against some of your favorite writers. You can win a FREE NASCAR autographed item and an entry into another NASCAR FanDuel contest.

Support our site and play with Frontstretch today!

NASCAR heads to Dover International Speedway this weekend for the AAA 400. The high-banked concrete track, known as the Monster Mile poses a unique set of challenges for the Monster Energy NASCAR Cup Series.

FanDuel debuted its new daily fantasy NASCAR contest at Talladega last week and it will make a return at Dover for Sunday’s race.

Also, with only 0.1 points awarded for each lap led by a driver, the need for a dominator is less important when building a winning lineup. The 400-lap race will only have a total of 40 points up for grabs in this category. Take note when building your roster and focus on mid-pack drivers who can climb up toward the front on race day.

Now that the MENCS is out of Talladega, Busch becomes the go-to play once again. He had a three-race win streak going into the superspeedway and will look to stay hot at Dover. It’s a track where he has three career wins, including one during the playoffs a season ago.

There’s no reason to think Busch and his No. 18 Toyota team will be slowing down anytime soon.

Dover is Larson’s best track, and in the past two races he has been as good as it gets without winning. At this oval a season ago, he led a race-high 241 laps in an absolutely dominating performance. He followed that runner-up result with 137 laps led and a fifth-place mark when the series visited later on in the season.

Larson has been the top Chevrolet driver to this point in 2018. He is the only driver running a Camaro inside the top 10 in points and won the pole for Sunday’s race. Put him on your roster.

Like Larson, Elliott has figured out Dover in his limited time driving the MENCS. He has four top-five finishes in four career races there, an impressive run of consistency. He has finished third twice and then ran second in the fall race of 2017. In that race, he led the most laps before surrendering the lead to Kyle Busch with two to go.

Hendrick Motorsports’ lack of performance has been widely talked about to start the year. However, they have performed well at shorter tracks. While Dover does not run like a prototypical short track, the one-mile oval still closes the gap between manufacturers.

Expect Elliott to run his usual top-five race this weekend.

Bowyer is a sneaky pick to dominate Dover heading into this race weekend. He is a constant contender for a top five so far this season. And with a win out of the way at Martinsville, there is no need for him to be conservative.

From 2011 to the spring of 2015, Bowyer did not finish outside the top 10 at Dover. With Stewart-Haas Racing, he finished sixth in the fall race in 2017, bouncing back from missing the NASCAR playoffs.

This year, SHR is the class of the field when it comes to equipment. Add in Bowyer’s recent momentum, that Dover history and you have a winning combination.

Jones has only two Dover races under his belt but has run well in those two starts. He finished 15th in his debut last season and then ran 12th in the second race. He is another young driver on the uptick at the Monster Mile, now driving the No. 20 car that won here with Matt Kenseth as recently as 2016.

Jones has six top 15s in 10 starts this season, a total that also includes four top 10s. Talladega was rough for the MENCS sophomore but Dover should get him back on track.

Newman was practically unbeatable at Dover in his early years with Team Penske. He had three wins in his first six starts, leading over 100 laps in all three of those races. He also has only two DNFs through 32 starts at Dover, which is appealing to the new FanDuel scoring structure.

Since those early days, Newman has slowed down, but still contends for a top 12-15 on a near weekly basis. He has five top-11 finishes so far this season and that’s plenty good enough for this salary.

There have been multiple times during the past few races Almirola has been the fastest driver on track. Excelling in his new ride with SHR, he has an average finish of 12.7 through 10 races and also earned four top 10s. The No. 10 team has yet to put a complete race together, but it’ll come. There has been a valiant effort of late to get that win to secure a playoff spot.

Almirola has a pair of top-five finishes in 11 races at Dover and an average finish of 17th. He should improve on that this weekend.

With all the talk of Elliott and Larson’s early success at Dover, Suarez has flown under the radar. The second-year driver was ultra impressive here in his two starts last season. He started inside the top five both races and ended with finishes of sixth and eighth.

As of now, there aren’t any bargain tier drivers that stick out pre-practice and qualifying. William Byron ($7,800) and Darrell Wallace Jr. ($7,500) might come into play if they show decent speed during Saturday’s final practice. 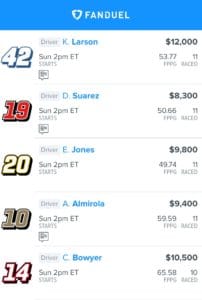 How come every on-line review of FanDuel reads like it was written by a FanDuel PR guy? That includes these weekly FD stories on FS. Is it a coincidence or are the on-line reviews all fake? Guess the FS articles are really an ad for FD. But they sure aren’t identified as such. Do any FS readers actually play the NASCAR gambling?