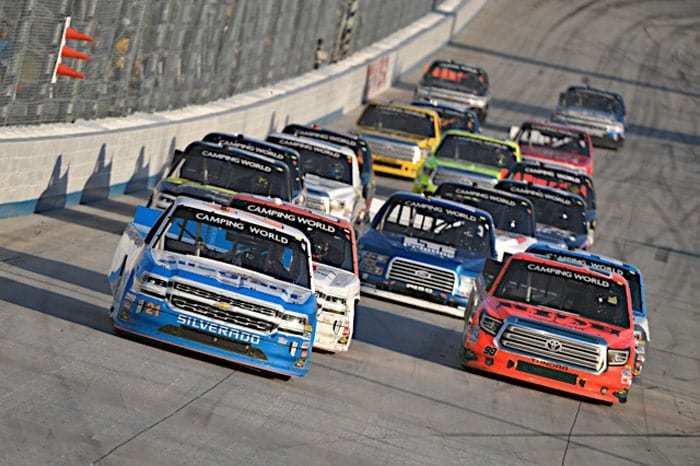 The Camping World Truck Series has been off for the last month since Martinsville.  That ends on Thursday when teams pull into Dover International Speedway for Friday’s JEGS 200.  34 teams are currently entered for the race.

Driver change-wise, Joe Nemechek returns to the No. 8 NEMCO Motorsports Chevrolet, replacing his son John Hunter Nemechek.  The No. 87 that Nemechek planned to attempt to qualify at Martinsville before the weather forced a withdrawal is not entered.  Reed Sorenson is also back in the Truck Series, replacing Robby Lyons in the Premium Motorsports No. 15.

DGR-CROSLEY co-owner David Gilliland will drive the No. 54 Toyota, replacing phenom Kyle Benjamin.  Tyler Young returns to the No. 20 Chevrolet, replacing Reid Wilson.  Bayley Currey returns to Copp Motorsports’ No. 83, replacing Kyle Donahue.  Todd Peck is in the Beaver Motorsports No. 50 in place of Dawson Cram.

Jesse Little is back with his own No. 97 JJL Motorsports Ford.  Little impressed earlier this season at Atlanta, where he finished eighth.  Henderson Motorsports’ No. 75 for Parker Kligerman and All Out Motorsports’ No. 7 for Korbin Forrester are also both back at the track after skipping Las Vegas and Martinsville.