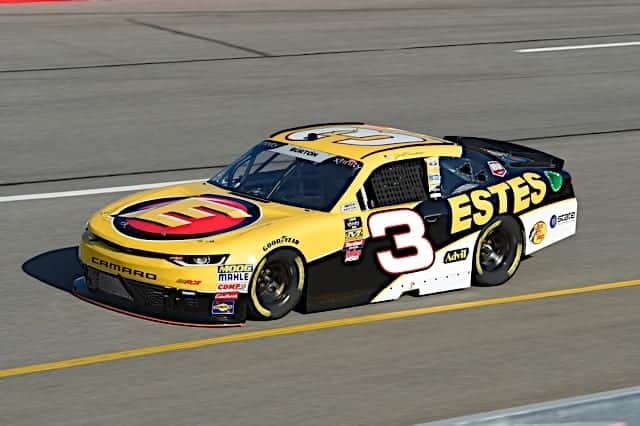 Five years ago, Jeb Burton looked like he was going to be one of NASCAR’s next big stars. Now, the 25-year-old is just trying to get his career back on the right track.

The next year, Burton competed full-time in Trucks. This time, though, it was with ThorSport Racing. All of his stats were down compared to his rookie campaign, but he impressed BK Racing team owner Ron Devine enough to pull the trigger on signing the young hot-shoe, bringing him to the Monster Energy NASCAR Cup Series in 2015.

He ran 28 races in his rookie Cup season. Since then, the Virginia native has competed in just 24 NASCAR races total across the top three divisions.

This season, he’s running a trio of races in the No. 3 Richard Childress Racing XFINITY Series Chevrolet. In his first outing at Richmond Raceway, Burton started 14th and finished 12th, picking up seven stage points in the first stage, mostly due to pit strategy. He’s hoping this is the start of something special.

“We’ve just been trying to find a home,” Burton told Frontstretch. “It’s been tough to, and I haven’t found that, and I feel like I have that at RCR. Going there, hopefully we can grow our partners and partnerships there and they can help us do that, and we can be there for many years to come.”

Burton’s first race was at what he considers one of his worst tracks on the circuit. He will pilot the No. 3 machine again this coming weekend at Dover International Speedway, where he has six total starts, with a best finish of ninth in 2013.

After Dover, Burton isn’t scheduled to compete in an XFINITY event until June 30 at Chicagoland Speedway, which will be his last race of the season for RCR. He’s been splitting the driving duties between Austin Dillon, Ty Dillon and Shane Lee thus far this season, and Brendan Gaughan is slated to compete at a pair of road courses later this year.

Though he hasn’t been in the car much, the team knows he’s in it to win, frequently making the two-hour drive from his home in Halifax, VA. to the team’s race shop located in Welcome, N.C.

“I’ve been going to the shop at least once or twice a week, even when I’m not racing,” Burton said. “I go there all the time, do some simulator stuff, communicate with the guys and just let them know how much I want it. That’s why I’m here, and hopefully it plays off.

“I’ve been doing some simulator work, watching a bunch of film, actually ran a late model race [April 13 at Ace Speedway] and we won that. That was a good confidence booster to go do that. That’s what I’ve been doing — trying to stay busy and do the best that I can when I get here.”

Last season, Burton competed in six races for JGL Racing with a best finish of fourth at Daytona in July. He admits that he wasn’t having “much fun,” and in order to get his career back, he wanted to try the Ryan Preece approach and raise a bunch of money, bring it to a top team to possibly have a shot at a victory.

“It’s all about having that funding and having those partners, and that’s the tough thing about the sport right now,” Burton said. “Gibbs has definitely got their stuff together, and it’s making Ryan shine. He has it together, and I think we’re right there, we just need a little bit more. Daniel Hemric has been running good every week, he’s been really close to winning, so I think RCR has done a good job over the off-season of getting their stuff better.

Burton has lost out on sponsorship twice in his career. The first was following his rookie Truck season with Turner Scott Motorsports as Arrowhead departed, and most recently in 2016 competing for Richard Petty Motorsports when J. Streicher & Co. backed out after the ninth race of the season.

He knows that if he doesn’t have funding, he can’t get to the racetrack, and is the reason he’s only competed in eight NASCAR races since the beginning of last season.

Burton enters RCR as the company is on a bit of a downward spiral, at least when it comes to winning. The organization hasn’t won an XFINITY Series race since Michael McDowell won at Road America in August of 2016, and 2017 was the first season in which RCR went winless when competing in a full XFINITY schedule.

Meanwhile, Burton is behind the wheel of the famed No. 3 car, and the best equipment he’s ever been in.

“That’s the way I looked at it with the Turner Scott deal, and now to get my career back this is the best,” he said. “This is it. I need to go do a good job. “It’s just been a tough road. Ever since losing the sponsorship at Turner – out of my control – winning races and poles and doing all of that in 2013 and all of that got taken away from me because of funding, that was tough. Ever since then, it’s just been a tough road.

“I need to go do a good job, too. It’s been a while since I’ve done that. I’ve done a good job for some of the equipment that I’ve been in, but I need to go win and run top five, run up front and show people that I can do it again.”

Burton admitted his goals for the two races remaining are to run in the top five, and hopefully battle for victories. Going forward, he hopes this opportunity can grow with RCR.