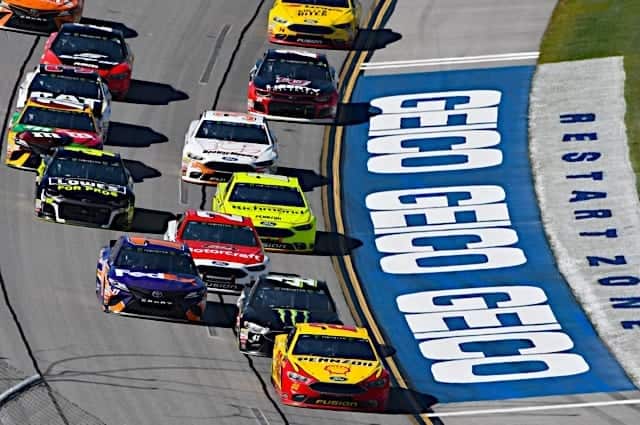 Spencer Gallagher won the first race of his NASCAR XFINITY Series career this past Saturday at Talladega Superspeedway.  The ebullient driver, raw and giddiness exuded palpapatle joy during his post-race interview.

The reaction from other drivers and those calling the broadcast, which should be noted were other drivers, also seemed to embrace the win, especially as it adhered to a David versus Goliath narrative, with Gallagher driving for a small team that beat the big ones.

The feel-good story that was Gallagher’s win has been quickly wiped away with the news that he violated NASCAR’s substance abuse policy.  Now, because of the win, the story has become more of a PR nightmare.

How unfortunate for the sport to be able to celebrate and sell an upstart driver like Gallagher only to have to rip it all away, including his position for the playoffs which has all but evaporated.

This story isn’t about drugs and this country’s relationship with them but rather about how mistakes can fell people and organizations – in this case both Gallagher and the sport.  Gallagher is now sullied and the sport is deprived of using his win as an inspirational story. Better luck next time.

Happiness Is…Quiet.  Following Joey Logano across the finish line at Talladega were 21 other drivers on the lead lap.  That means that 55 percent of the field actually made it to the end, which, really, seems like a typical Talladega race.  But there was also something kind of different about this race.

Perhaps what made this race interesting, and possibly even enjoyable, was the fact that there was no pile-up during the last ten laps of the race.  That meant another wonderful thing: there was no need to go to Overtime (pardon me as I still work out the Green-White-Checkers parlance, still overriding the glitch in the programming).

Overtime as restrictor-plate tracks has been one of the stupidest things to ever come about.  The reasoning behind the comment is that after the first lap the cars have barely gotten up to speed so it’s hardly racing that’s any good.  At the superspeedways, the overtime should be a five-lap deal, but that’s a different topic.

For a change it was great to see the drivers race to the checkered flag over a continued period of time rather than seeing some short contrived distance provide the basis for victory.  Logano’s win may have been tame but the fact that they were actually racing without wrecking was great.

Happiness Is…Pastels.  Though the city of Miami embraces pastel coloring as part of its iconography, the show Miami Vice was a central part of bringing this thematic element to life.  The city is home to both modernism and art deco; steel and glass visions, and mid-nineteenth century opulence. It is a fashionable place that is able to bring attention to itself, which makes the announcement that the city would be bringing the idea of a Formula 1 race to its streets both a surprise and not surprising at all.

The latter part first.  The Formula E series held a race on the streets of Miami a few years ago and hasn’t returned because, well, things did not go smoothly between the city and FIA.  The Miami city counsel, however, has added a potential F1 race to its agenda, and if approved could bring a race to the city in 2019, likely October.

This whole thing seems a bit rushed, which is a business tactic to push things through, but perhaps the attempt is genuine.  Putting together an F1 race under such a time frame would be unlikely but not altogether shocking. Of the cities that could host one, especially on the city streets, Miami seems like a great idea.  It would be great to see the series add another race in North America. Now about the potential date being during hurricane season?

Happiness Is…Danica? Dale? It’s a throwback to yesteryear with both Dale Earnhardt Jr. and Danica Patrick making the headlines this week.  Earnhardt and his wife, Amy, announced the birth of their first child, apparently coming as America’s attempt to upstage the Brits and Kate Middleton’s latest offspring.  Take that. Nothing seems to make social media swoon like baby coverage. At press time there was no announcement as to who Isla Rose Earnhardt’s first sponsor would be.

Then there’s Danica Patrick who is actually doing something behind the wheel of a car.  Patrick once more strapped into a IndyCar as she begins preparation for this year’s Indianapolis 500.  The race will be her career finale. As part of the race, veteran drivers must go through orientation, or is that re-orientation, a stage required for running the 500.  To see Patrick again donning the day-glo Go Daddy firesuit almost felt nostalgic.

It’s funny that both of these drivers became stories this week as during their last years in NASCAR they were known more for being a presence than their actual driving.  While Earnhardt will be on the NBC broadcasts later and Patrick will likely find a spot doing practically anything she wants, seeing their names showed how much the sport has moved on without them.  The NASCAR world seems to move just as quickly as its cars on the track.

At one time years ago I thought Danica Patrick might actually offer hope that a female could race with the fast guys in NASCAR. Perhaps some time in the lower divisions might have helped her but she just joined a list of open wheel drivers to fail in NASCAR racing.
Her presence caused drivers to be careful racing with her as she hardly ever took responsibility for the many crashes she of which she was involved. Her failure might result in female drivers working their way up through the lower divisions and actually being able to communicate to her crew on changes required to keep up. I sincerely would come back to NASCAR if they could get back to racing and stop trying to push mediocre drivers such as Earnhardt Jr and Danica.

Danica still part of the conversation after she’s been gone for a while, suppose that says something.

She was what nascar needed at the time and now Bubba Wallace is the heir apparent.