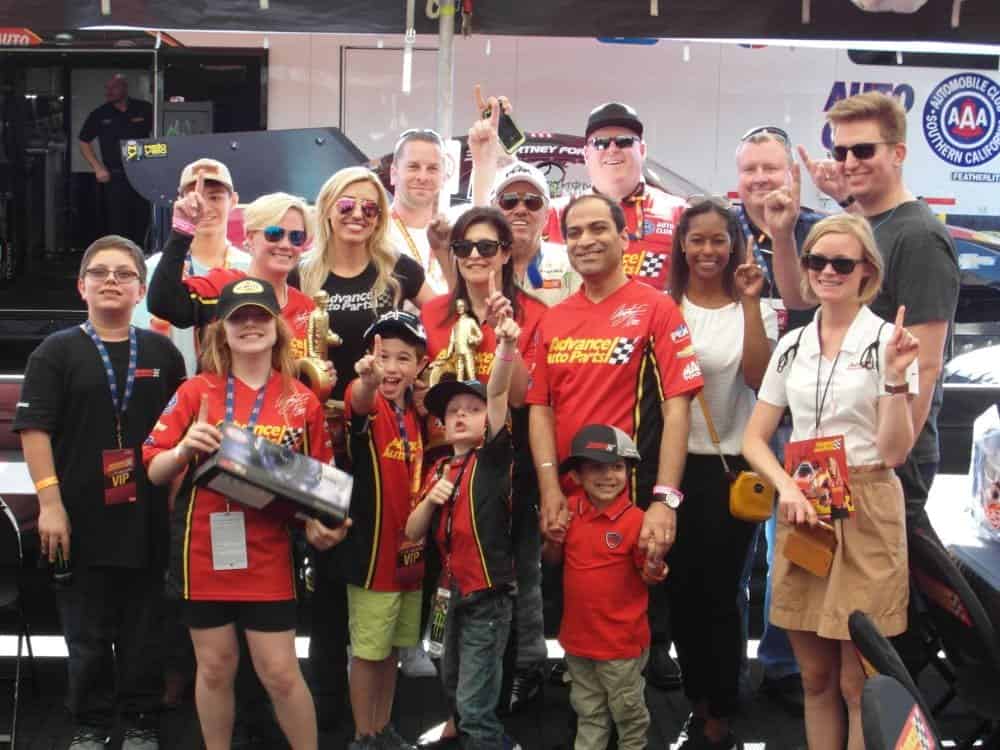 Courtney Force got her 2018 season off to a strong start, winning the second race out in Phoenix. It also marked her first win with sponsor Advance Auto Parts on board, an occasion the John Force Racing team marked by presenting some of Advance’s executives with the Wally trophies from Phoenix this past weekend at zMAX Dragway, the home track for the Roanoke, Virginia based company.

“It’s huge for everybody at Advance Auto Parts and our team here at John Force Racing to be able to kick off the season the second race out and get that win in Phoenix, AZ,” Force said. “It was a big victory for us. We were really proud to get that win for everyone at Advance Auto Parts, all the team members, all the execs, everyone from the distribution centers to the stores and corporate.

This is a happy team-sponsor relationship. While the win contributes to that, it’s not the only reason.

For one thing, with John Force Racing, sponsorship is a package deal. Sign up for one Force, and you get them all, not just carrying your brand name, but off the track as well.

“We love Courtney and the entire Force family,” Natalie Rothman, chief human resource officer for Advance Auto Parts, said. “They’re so supportive of Advance. They always go the extra mile for Advance so they’re not only great in the world of racing, but they go above and beyond for Advance and all of our Team Members that we have out in our stores, in our DCs and in our corporate offices.

“It’s a family that has wonderful values that aligns well with our cultural beliefs as a company.”

One of those beliefs is inclusion and diversity, something Advance takes very seriously. In the minds of most people, the automotive sector is largely a male dominated industry in terms of both those working in the stores and at the corporate office, and the customer base. If Rothman and Maria Ayres, Division President – South Division, both of whom were on hand to accept the Wallys in Charlotte, are an example, that perception is no longer correct.

“We actually are seeing continued growth in female customers,” Rothman said. “We continue to see more women coming into the company and our industry which is another reason why our company’s focus on inclusion and diversity is so important to us all.”

From that standpoint Courtney Force is the perfect representative for Advance, putting that female face front and center in the minds of racing fans.

“For us to have a female driver that we sponsor is fantastic and exemplifies one of our cultural beliefs that’s really important to us in terms of promoting inclusion and diversity,” Rothman said.

It seems like such a small thing, but having that face and the association that goes with it is huge in terms of communicating that diversity focus to talented women already in the work force who may not have considered opportunities at a company like Advance before.

“I think she’s helping pave the way, to open a lot of doors for women who want to get into this industry,” Ayres said. “This industry is diversifying very quickly. We recognize that a diverse workforce creates a competitive advantage and we want to support women coming into the organization from the moment they come through the door.”

It’s long been understood that female drivers in the sport provide positive role models for young women coming up, and a look at the crowd surrounding Courtney Force’s pit area, as well as those surrounding the pits of other female NHRA competitors, confirms that belief.

“Courtney’s a phenomenal role model for young women and for all women who are trying to get into all sports so I think that’s just incredible,” Ayres said.

Force and her sister Brittany were among the first of the current generation of female drivers to hit the scene and they understand the responsibility and the example they are setting. It’s something that she embraces. It’s part of what makes her relationship with Advance Auto Parts work so well.

“It’s cool to see a lot of females working at Advance Auto Parts that are running the show over there,” Force said. “For me to be able to represent them on the motorsports side of things is a lot of fun for me and it really shows that females can do anything even if it is a male dominated sport or a type of business that could be mostly male dominated. We can all end up on top.”