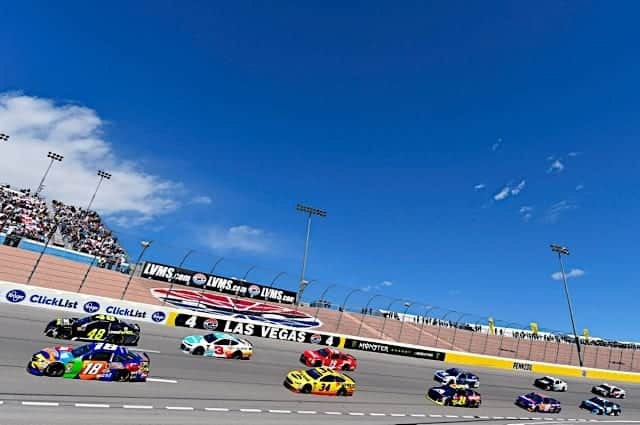 On Wednesday (May 2), NASCAR announced the indefinite suspension of Spencer Gallagher after he violated Section 19 of the rulebook — the substance abuse policy. The suspension came just days after he picked up his first NASCAR XFINITY Series win at Talladega Superspeedway.

NASCAR did not say what substance it was that was in Gallagher’s system when he was drug tested, and I am not going to speculate on what it was. Gallagher said in a press release that it was a “one-time error in judgment” that “will never happen again” and immediately enrolled in NASCAR’s Road to Recovery.

If this was a one-time incident, it will not alter my opinion of Gallagher. Everyone deserves a second chance. Plus, who hasn’t done something stupid in their 20s that they regret?

My hope is that Gallagher will come out the other side as an even better person. He has one of the biggest personalities in NASCAR and both times I’ve interviewed him I’ve gotten tremendous quotes.

But what this whole situation did was cause me to look at the list of substances banned in NASCAR’s rulebook. It’s a lengthy list but is summed up with this statement:

“NASCAR Members are prohibited from using, having in their system, possessing, purchasing, selling and/or participating in the distribution of any drug that is illegal to possess, use, and/or distribute by the laws of the United States of America and/or any of its 50 states, regardless of the amount, at any time. Illegal acquisition and/or illegal distribution of any prescription or over-the-counter medication are strictly prohibited at any time.”

So basically, you can only do a drug if it is prescribed to you, and NASCAR has to be made aware of that prescription. For example, Denny Hamlin caused a stir when he told Pardon My Take that about 70 percent of drivers take Adderall, which contains the banned substance, amphetamine. While that number is an overestimate, there probably are some drivers that take it, but they were prescribed it. Had they not been, they would have been suspended just like Gallagher.

That policy makes complete sense for most of the substances on the list, except for one: marijuana.

Now, I’m not writing this to be viewed as the pot-smoking journalist who just wants to see marijuana become legal everywhere; that is not the case. Whether you’re pro-weed or anti-weed, I couldn’t care less. But the fact is that marijuana is legal to a large portion of Americans, and I don’t want to see some of those Americans robbed of that right just because of NASCAR’s drug policy.

People on FRR could probably get prescribed marijuana, but they can’t smoke it recreationally while they are home. Marijuana has been known to stay in your system for several weeks after you smoke it. Hypothetically, if someone with FRR smoked marijuana while they were back at the shop in Colorado, then it would still be in their system when NASCAR tested them at the track and they would fail.

The Monster Energy NASCAR Cup Series has four races on the schedule in either California or Nevada, states where recreational marijuana use is legal. Two of those races are part of the West Coast Swing, where a good number of the NASCAR community will stay on the West Coast for three weeks and do fun stuff in the area during their off days — but they can’t smoke weed.

Why can’t those drivers and crew members do an activity that is perfectly legal in those states? How ironic would it be for someone to get suspended from NASCAR while they are in those states?

Sometimes drivers vacation in other countries during the few and far between off-weeks. If a driver goes to Amsterdam, gets to hang out with the locals and smokes while he is there, then should he be suspended?

Marijuana is going to continue to become legal in more and more states, and it is going to become tempting for a lot of the competitors. NASCAR needs to loosen up its rules on marijuana before that happens.

Obviously, drivers and crew members shouldn’t be lighting up blunts right before or during a race. They would be stupid to do so. My suggestion is to make the rule similar to the one currently in place for alcohol use, which prohibits drinking alcohol 12 hours prior to an event.

According to a study done by the National Highway Traffic Safety Administration, driving while under the influence of alcohol is way more dangerous than doing so while high on marijuana, so the rules against it could at least be equal to the ones in place for alcohol.

Speaking of alcohol, with beer companies like MillerCoors pulling back on their NASCAR support, legalizing marijuana could provide new sponsorship opportunities. Let’s not forget that last year Carl Long showed up with sponsorship from Veedverks, a Colorado-based marijuana vaping company until NASCAR forced him to remove it. There is money to be made off of those marijuana companies.

If you’re worried about that being a bad influence, we already have to watch every week as the race winner emerges from his car and is showered with beer or champagne. We hear afterward about how wild of a celebration the winner had later that evening. I’ve seen since I was a kid just how rowdy fans at the track get when they’ve had a few too many. How would having a marijuana company on the hood of the car be any worse of an influence on kids than that?

If NASCAR doesn’t embrace the “weed movement” it’s instead going to end up with more suspended drivers, which could result in the loss of sponsorships. The sport needs to get ahead of the curve on this issue and revisit its stance on marijuana.

Michael Massie is a writer for Frontstretch. Massie, a Richmond, Va. native, has been a NASCAR superfan since childhood, when he frequented races at Richmond International Raceway. Massie is a lover of short track racing and travels around to the ones in his region. Outside of motorsports, the Virginia Tech grad can be seen cheering on his beloved Hokies.
@m_massie22
Previous 4 Burning Questions: What Is The Fate Of Spencer Gallagher?
Next Toyota No. 7 Claims Spa Pole, Pietro Fittipaldi Crashes