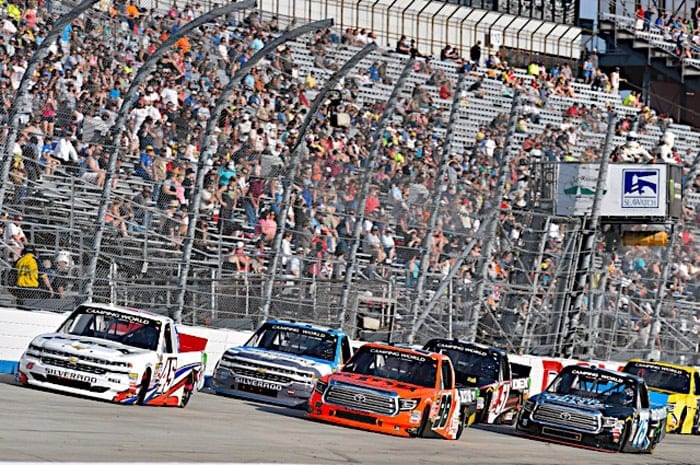 After five long weeks of sitting dormant, the Camping World Truck Series returns to action Friday evening at Dover International Speedway as part of a triple-header with the Monster Energy NASCAR Cup and XFINITY series.

When Truck Series drivers were last on track, it was for a sn0w-delayed Monday trip to Martinsville Speedway. Despite getting the race started on Saturday afternoon around its originally scheduled time, a combination of rain and snow initially postponed the conclusion until Sunday evening, following the Cup race. But a larger than expected amount of snow fell overnight, leaving the speedway blanketed in white and sitting silently until Monday.

Though the wait was long, it was worthit. Ben Rhodes dominated, leading a race-high 134 laps, but it was Kyle Benjamin who stole the show. In his series debut with DGR-Crosley, the 20-year-old led 74 laps before relinquishing the top spot to eventual winner John Hunter Nemechek.

Fast forward to the first weekend in May, and there will be a different driver behind the wheel of the No. 54 for DGR-Crosley. David Gilliland, one of the owners of the newly-formed organization, will pilot the truck, marking the first time he and son Todd, who will run the No. 4 Kyle Busch Motorsports Toyota, have raced together. The 17-year-old will then sit on the sidelines at Kansas Speedway next weekend ahead of his 18th birthday between Kansas and Charlotte.

Alongside Gilliland at KBM, Harrison Burton returns to the organization to pilot the No. 51 DEX Imaging Toyota. With just one start under his belt so far this season, the 17-year-old finished eighth at Martinsville and has seven more races scheduled this year. Burton entered the year with just seven races to his name, including six which came during 2017. In his final race at Martinsville in October, he scored a career-best fourth-place finish.

Meanwhile, though he’s not listed on the preliminary entry list, Tanner Thorson will make his series debut behind the wheel of the No. 20 Chevrolet for Young’s Motorsports, the first in 12 starts announced earlier this year. The dirt racer made his NASCAR debut at Bristol Motor Speedway and finished 23rd in the K&N Pro Series East race.

“I’m excited and ready to get behind the wheel of the No. 20 GoShare Chevy this weekend at Dover,” Thorson said in a team release. “I can’t thank Team Dillon, Young’s Motorsports and GoShare enough for believing in me and providing this opportunity.”

Perhaps the best news coming into Friday races is that there are zero – that’s right ZERO – Cup drivers on the entry list. Add in that the series has seen 15 different winners (only Kyle Busch has multiple wins) in the last 18 starts, and there’s a decent chance we’ll see another new victor this weekend.

With that said, Johnny Sauter, who’s off to a stellar start this season, looks to defend his Monster Mile victory from last year. The driver of the No. 21 GMS Racing Chevrolet began the year with the win at Daytona in the season-opener before a third and a second at Atlanta and Las Vegas, respectively. While Martinsville wasn’t kind to the veteran and he scored a 19th-place finish, Sauter is already well on his way to another playoff berth and will likely be considered a championship favorite when the time comes.

Regardless of whether it’s a young driver looking to make a name for themselves or a veteran who schools the inexperienced, just getting back to racing can be nothing short of a good thing for fans and drivers alike.