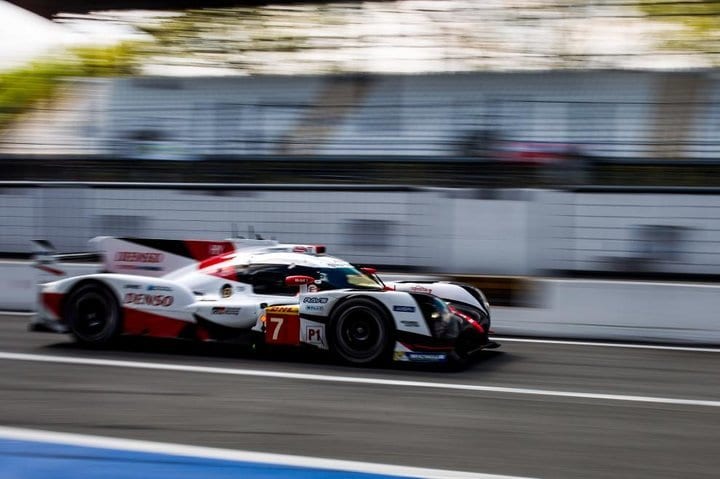 Toyota GAZOO Racing’s No. 7 claimed the overall pole Friday (May 4) for Saturday’s 6 Hours of Spa-Francochamps with an average lap time of 114.582 seconds (136.732 mph).  However, the session was overshadowed by a huge crash at the Eau Rouge-Radillion complex involving DragonSpeed’s Pietro Fittipaldi.

Replays showed that Fittipaldi bottomed out in Eau Rouge and the car speared straight off the track.  Fittipaldi was unable to regain control before plowing straight into the tire barrier.  The session was red-flagged for nearly a half hour as rescue crews extricated Fittipaldi from his BR Engineering BR1, then fixed the barrier.

At last update, Fittipaldi had been placed on a stretcher and transported by ambulance to the Infield Care Center at the Circuit de Spa-Francochamps.  According to an FIA Bulletin, Fittipaldi has suspected fractures to both legs.  As a result, he has been airlifted to the Centre Hospitalier de la Citadelle de Liège for treatment.

Mike Conway and Kamui Kobayashi combined to set the pole winning time.  Kobayashi was fastest overall with a time of 114.488 seconds (136.846 mph).  The combined time was three-eighths of a second faster than the No. 8 Toyota of Fernando Alonso and Kazuki Nakajima.  REBELLION Racing’s No. 1 Rebellion R13 for Neel Jani and Bruno Senna will start third, a full 1.8 seconds off pole.  The No. 3 Rebellion R13 of Thomas Laurent and Gustavo Menezes will start fourth, followed by SMP Racing’s No. 11 for Mikhail Aleshin and Vitaly Petrov.

SMP Racing’s No. 17 failed to set a time in the session.  On his first lap out of the pits, Stéphane Sarrazin stalled the car on the Kemmel Straight to bring out a red flag.  Afterwards, Sarrazin indicated that the gearbox and engine seized, rendering the car immobile.  The No. 17 will have to start at the back Saturday if the problem can be fixed.

Ford Chip Ganassi Racing WEC kept up their dominant form in the GTE ranks.  Andy Priaulx and Harry Tincknell combined to average a time of 132.947 seconds (117.845 mph) to claim the class pole in the No. 67 Ford GT.  They beat out teammates Stefan Mücke and Olivier Pla by eight-hundredths of a second, although Pla did turn the fastest lap in the class.

The No. 91 Porsche of Gianmaria Bruni and Richard Lietz were only four-thousandths behind the No. 66 Ford in third, followed by Michael Christensen and Kevin Estre in the second Porsche.  BMW Team MTEK’s No. 82 BMW M8 GTE for Antonio Felix da Costa and Tom Blomqvist was fifth fastest.

In GTE-Am, Dempsey Proton Racing’s No. 77 Porsche for Matt Campbell and Christian Ried combined to average a time of 136.357 seconds (114.898 mph) to squeak out the class pole.  The time was just two-thousandths of a second faster than Aston Martin Racing’s Pedro Lamy and Paul Dalla Lana.  Team Project 1’s Jörg Bergmeister and Egidio Perfetti was third fastest, followed by the No. 88 Dempsey Proton Porsche for Matteo Cairoli (fastest driver in the class) and Giorgio Roda.

Before Fittipaldi’s wreck, the No. 10 turned in the seventh fastest time in LMP1 qualifying.  However, you lose times if you bring out a red flag, which Fittipaldi did when he crashed.  If the No. 10 can be repaired ahead of the race, they’ll have to start in the rear.

Also, there have been a pair of withdrawals.  DailySportsCar is reporting that the CEFC TRSM Racing team will not race this weekend at Spa.  The reason?  Big bucks were not received.  The team was supposed to debut the new Ginetta G60-LT-P1 chassis with a Mecachrome engine.  However, the team missed payment deadlines to Ginetta.  As a result, Ginetta has denied the team permission to race the cars.

Well I think WEC is making big mistake by only televising on velocity the first and last hrs of racing. Then going to motortrend.com which I’d $4.95/mo. If they want the USand Canadian fans to follow should just stay on velocity. Oh well at least I’ll get to see the Sebring race since I live there even though fox tv switched around on their channels we still were able to see a complete race. Really to bad for WEC.

Bob, I’m right there with you. I find the TV schedule confusing, especially since there is exactly 1 race as part of the Super Series that’s actually going to air at a “decent” time of day here. That’s Sebring in 10.5 months. They’re airing that live, flag-to-flag on Velocity (on a Friday, no less). Also, they didn’t stream the practice sessions that they said they would this weekend.

Also, in regards to the Motor Trend stuff, I’d go with the $50 a year subscription instead of $4.95 a month to save some money. The content there is pretty substantial. V8 Supercars is live on there, along with the Blancpain GT Series (Sprint and Endurance), DTM and other series. Plenty of content, but something like the WEC seems to deserve a little better than this setup. I suppose most viewers will be pleased with the live, flag-to-flag coverage of the 24 Hours of Le Mans next month on Velocity, though.