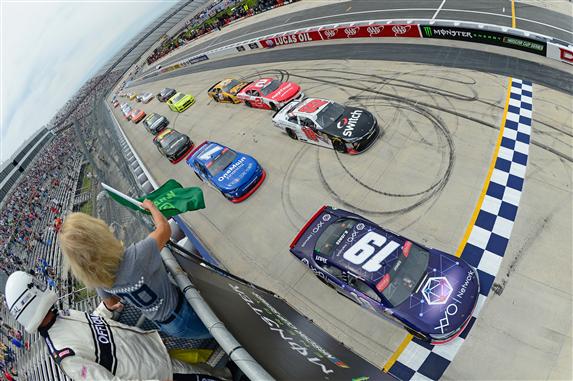 Justin Allgaier picked up his first win of the 2018 XFINITY Series season in Saturday’s OneMain Financial 200 at Dover International Speedway. The JR Motorsports driver led the most laps – 104 – and held off a late charge by teammate Elliott Sadler to win by 0.306 seconds. Allgaier also earned the $100,000 Dash 4 Cash bonus as part of the victory.

Pit road issues plagued all three JGR cars over the course of the race. Meanwhile, Reddick was one of many drivers who started in the back because he did not pass pre-race inspection and was still able to earn a top-five finish.

Jones started the race on the pole and led the first 23 laps before Sadler passed him. Shortly thereafter, a caution for a cut tire sent Josh Bilicki into the wall for the second caution of the day.

Roush Fenway Racing’s Ty Majeski led the field to green for Stage 2, only to fall back immediately and disappear into the garage while making lengthy repairs due to a broken fourth gear. Reddick assumed the lead on lap 54 and held it until Allgaier slipped by on lap 76, just before the yellow flag flew for a spinning Kaz Grala.

Jones regained the lead at lap 96, only to get passed by Sadler within ten laps, who would then be passed by Allgaier at lap 110.

The caution flew again after contact with Cindric put Nemechek into the wall at lap 128, allowing Garrett Smithley to lead briefly under caution. Allgaier took the lead for good after passing Sadler on lap 133, and held it through cautions for Alex Labbe‘s spin on lap 143 and Dylan Lupton‘s lap 168 collision with a many-laps-down Majeski.

There were 11 lead changes among seven drivers throughout the course of the race, which was slowed by eight cautions.

Allgaier is one of only four full-time XFINITY drivers to win this season, along with Reddick (Daytona), Bell (Richmond) and Gallagher (Talladega). Sadler leads the standings by 33 points over Allgaier.