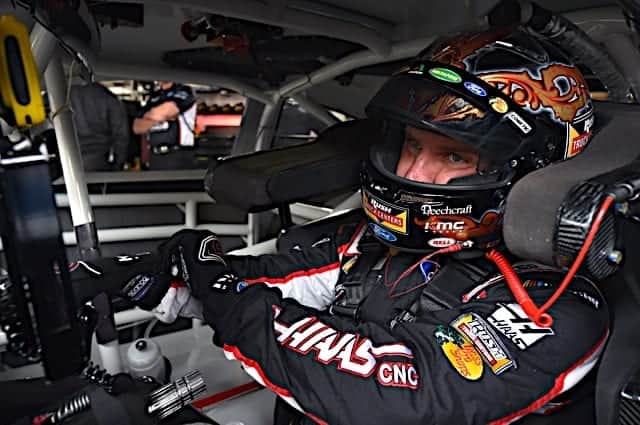 Clint Bowyer: ‘You Hate to Give Them Up Like That’

Dustin Albino May 6, 2018 Cup Series News, Dustin Albino Comments Off on Clint Bowyer: ‘You Hate to Give Them Up Like That’

Clint Bowyer had never won at Dover International Speedway prior to Sunday’s AAA 400. After 400 miles of racing, second was the best he could do.

“You hate to give them up like that, but if you’re going to lose to anybody it might as well be your teammate,” Bowyer said of his runner-up result.

Bowyer started the race in 12th, but was quick during the two practice sessions on Saturday. However, following a lap 22 caution for Corey LaJoie, the No. 14 pit crew had to make an additional pit stop for a problem during their first go-round.

“We battled through a lot of adversity, stubbed our toes with the first pit stop and got us behind. Our car was fast,” he said.”

Over the final 95 circuits to end the opening stage, Bowyer rushed from deep in the field to finish seventh. While the No. 14 crew stretched its fuel, several drivers ran out of gas and coasted to the conclusion of the stage, awarding Bowyer four stage points.

The second stage went much smoother for Bowyer and his team, as the No. 14 car stayed inside the top 10 for the entire run. He ended the stage in fifth, picking up six more stage points.

Lap 271 was a turning point moment of the race, as Kyle Busch broke a driveshaft. Most teams pitted, but restarting in the outside line shot Bowyer ahead of Kevin Harvick and Brad Keselowski, the two dominant cars on the afternoon. On lap 296, he passed Ricky Stenhouse Jr. for the race lead, where he led the next 40 circuits.

On lap 320, the skies opened up for a 41-minute red flag. Though Bowyer wanted it to continue raining, he would restart the race in the lead. Soon after the race resumed, Harvick rocketed past the No. 14 car en route to his fourth victory of the season. Bowyer finished in the runner-up position.

“It makes such a big difference having clean air and not,” Bowyer said. “We put ourselves in a position to win this thing, I just needed one more shot at adjusting on my car. The guys did a good job of keeping us out front and giving us the opportunity.”

Bowyer, winner at Martinsville Speedway in March, admitted that getting more chemistry with crew chief Mike Bugarewicz has helped the team improve from a disappointing 2017 at Stewart-Haas Racing.

“It’s fun to be a part of this organization,” he said. We finally got my car and our team capable of running with that [No.] 4 car. They were the class of our organization all year last year, and a year under our belts with the [No.] 14 bunch, the communication and everything else, you’re starting to see the benefits of the year under our belts.”

In 24 prior starts at the Monster Mile, Bowyer had a best finish of fourth in 2014. Last season, he placed 31st and sixth.

Through the opening 11 races of the season, Bowyer has the victory and sits fourth in the championship standings. Next week the Monster Energy NASCAR Cup Series heads to Kansas Speedway, the home track of the Kansas native.

Dustin joined the Frontstretch team at the beginning of the 2016 season. 2020 marks his sixth full-time season covering the sport that he grew up loving. His dream was to one day be a NASCAR journalist, thus why he attended Ithaca College (Class of 2018) to earn a journalism degree. Since the ripe age of four, he knew he wanted to be a storyteller.
@@DustinAlbino
Previous Brad Keselowski Fades to 6th After Strong Dover Run
Next Thinkin’ Out Loud: Kevin Harvick Sweeps Up Dover