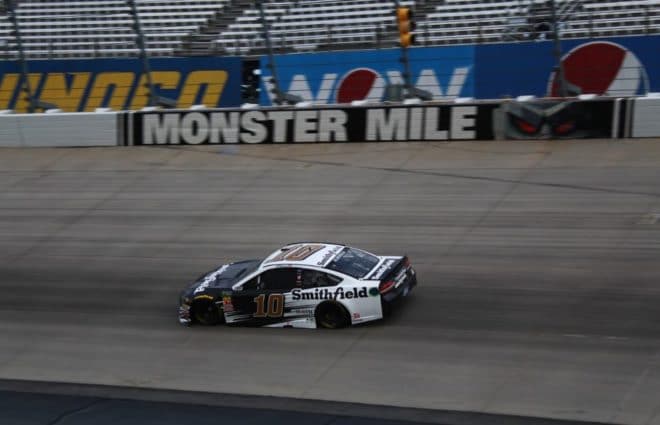 Monster Energy NASCAR Cup Series: Monster Mile Takes A Bite Out Of… No One? – It was business as usual for Kevin Harvick Sunday (May 6) at the Monster Mile. Harvick cruised to the checkered flag by seven seconds over his closest competition. It was a series-leading fourth MENCS win of the year and the ninth for a driver over 30. (So much for the sport’s “young guns.”) The entire Stewart-Haas Racing team had four cars in the top 11 and, for the first time ever, three cars inside the top five. They reestablished themselves as the team to beat in the season-long championship after a month-long push by Kyle Busch to take control.

Behind Harvick, though the biggest story was the Monster Mile hardly being monstrous. Maybe it was tired out after two great days of nail-biting finishes in NASCAR’s XFINITY and Camping World Truck series. Maybe Goodyear needs a better compound for the MENCS side. Maybe the MENCS teams are so close right now aero push is all you need to keep them running in place.

Whatever the reason, much of Sunday’s Dover dash was a single-file procession to the flag. Track position was the name of the game; as soon as you lost it, getting it back proved near impossible. (See: Jimmie Johnson, Kyle Larson, both of whom had great cars late but never had a chance to show their stuff.)

A place known for chewing up race cars and spitting them out also produced just two major wrecks on the afternoon. One of them was for a driver yet to finish a MENCS race (Cody Ware) and the other was for a guy in Derrike Cope who hasn’t finished on the lead lap in the series since 1998.

In other words, those drivers who crashed were hardly considered contenders to begin with. A lot of the drivers found themselves just “hanging on” with a track that demands 110 percent of your focus every lap. But “hanging on” is a lot tougher to watch on television when it’s single-file and passing free versus the “hanging on” we see at a place like Bristol.

The Monster went to sleep on us Sunday and, as a result, a weekend chock full of NASCAR competition finished up with a bit of a snoozer. Not even the rain game could deliver a late Sunday afternoon surprise.

Dover has had this problem over the past several years. The crowd Sunday was better than expected, especially considering the weather but it’s one of the sport’s few independently-owned facilities left. Days like Sunday put them at risk for losing their spot on the NASCAR schedule in the coming years.

That would be a shame; Dover has a rich history and connection with the sport. But Harvick’s cruise control win did little in the track’s difficult battle to win back the local fan base. – Tom Bowles

Allgaier paced the field for a race-high 104 laps en route to his first victory of 2018, holding off his JR Motorsports teammate Elliott Sadler, as the two bumped and banged coming to the checkered flag. It was his first victory at the Monster Mile. Daniel Hemric, Christopher Bell and Tyler Reddick rounded out the top five.

Johnny Sauter finished sixth in his return to the XFINITY Series, replacing Spencer Gallagher in the No. 23 car. After winning his second career pole Saturday morning, Brandon Jones finished the day in 10th.

The series has the next two weeks off before heading to Charlotte Motor Speedway on May 26. Through the opening 10 races, Sadler has a 33-point advantage over Allgaier, and the top five drivers in Saturday’s race, fill the top five in the championship standings. – Dustin Albino

Camping World Truck Series: Can Anyone Beat Johnny Sauter? – Noah Gragson may have started on the pole in Friday afternoon’s JEGS 200, and he came darn close to taking his first 2018 win. But when the checkered flag flew, it was Johnny Sauter who walked away victorious for the second straight season. And at the rate he’s going, he just might walk away with the championship before anyone blinks an eye.

Sure, the Truck Series is just five races into the season and there’s plenty of time for something to happen, but Sauter currently holds a commanding 51-point lead and shows little sign of stopping. The victory at Dover was his second already this season, and aside from a 19th at Martinsville, he has yet to finish worse than third, giving him an impressive 5.2 average finish. Take that anomaly out and he holds an even better 1.8.

Of course, the playoffs mean a point reset, which will wipe out that expansive lead he has, but remember that Sauter already has 12 playoff points, seven more than his closest competitor in Brett Moffitt. And his two victories all but guarantee his spot in the championship battle, barring some major collapse or a sudden shuttering of the team (which won’t happen).

The bottom line is that despite the youth movement in NASCAR, Sauter has set out to prove that the veterans still have what it takes to win races and championships. There’s still plenty of racing to go before the end of the season, but you can bet he’ll be a part of that conversation all the way to Homestead in November. – Beth Lunkenheimer

Sports Cars: The Dreaded Eau Rouge-Radillion Complex Strikes Again – The Circuit de Spa-Francochamps is one of the most prestigious circuits on the planet.  4.352 miles of high speeds, elevation changes and sharp turns.

Nothing is more difficult than the Eau Rouge-Radillion complex.  A super-quick left-right-left that starts downhill, then goes sharply uphill.  Great moments can happen there, like Olivier Pla’s pass that ultimately won the GTE-Pro class Saturday.

Having said that, there can be some terrible moments.

As previously noted, DragonSpeed’s Pietro Fittipaldi had a frightening crash in qualifying for Saturday’s 6 Hours of Spa-Francochamps.  In that crash, Fittipaldi suffered a broken left leg and broken right ankle that he has already had surgery on.  The injuries are actually somewhat similar to those that Kyle Busch suffered at Daytona in 2015.  Back then, Busch’s injuries put him out of the car for just over three months.

Fittipaldi was not the only one caught out by the complex.  Ford Chip Ganassi Racing WEC’s Harry Tincknell had a very similar crash to Fittipaldi at the end of the first hour on Saturday.  A failure pitched Tincknell into the tires at almost the same spot.

Safety car out, accident of #67 Ford at Raidillon 🙀😿

Driver @HarryTincknell managed to get out of the car. #6hSpa #WEC pic.twitter.com/f0kSSbLiiN

Later on, SMP Racing’s Matevos Isaakyan crashed at Radillion, ending his chance at an overall podium finish.  Unfortunately, the cameras didn’t catch Isaakyan’s crash in progress.  Unlike Fittipaldi, both Tincknell and Isaakyan walked away from their crashes. – Phil Allaway

Dustin joined the Frontstretch team at the beginning of the 2016 season. 2020 marks his sixth full-time season covering the sport that he grew up loving. His dream was to one day be a NASCAR journalist, thus why he attended Ithaca College (Class of 2018) to earn a journalism degree. Since the ripe age of four, he knew he wanted to be a storyteller.
@@DustinAlbino
Previous Thinkin’ Out Loud: Kevin Harvick Sweeps Up Dover
Next Up to Speed: A Surprising List of Winless Drivers in 2018 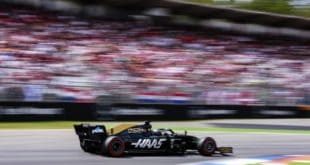