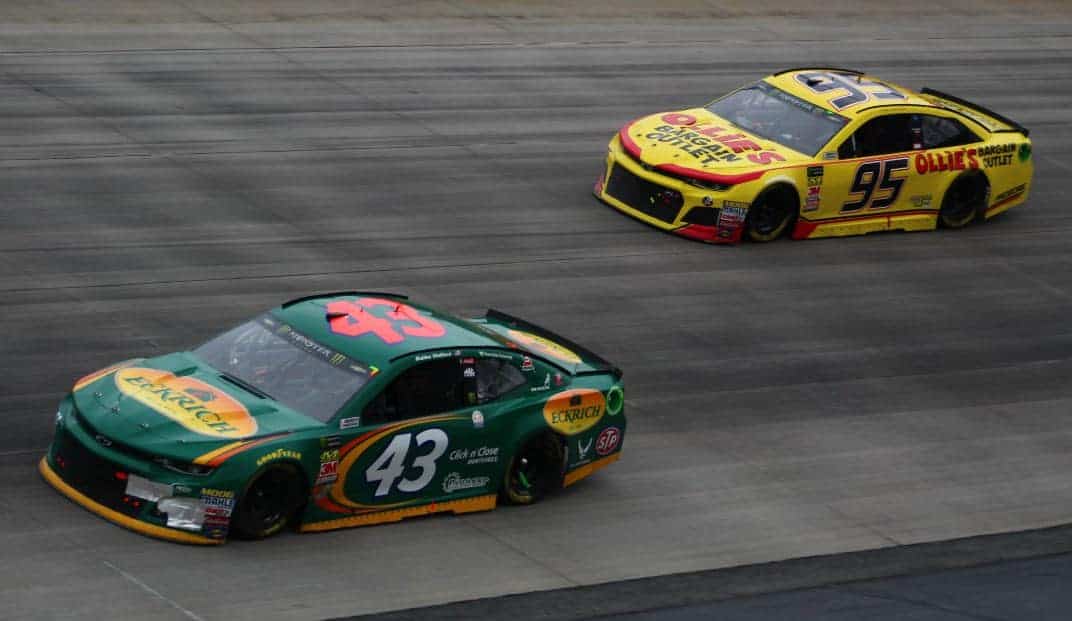 This time, it was Dover International Speedway, where the hot, slippery conditions from Friday and Saturday wore off to create a gray, cool Sunday afternoon 400-lapper.

With little-to-no rain throughout the opening 300 laps, the race was put under the red flag with 80 laps to go, which gave the field a cold track once again for the final restart.

The underdogs proved to clash with the conditions, with the Frontstretch “Underdog of the Race” finishing the lowest since Auto Club Speedway in March. With engine failures, track-wide racing grooves, wrecks and more Ford dominance, it eventually led to just an average race for the underdog teams.

As mentioned, our “Underdog of the Race” went to a mid-pack runner in Kasey Kahne. The Leavine Family Racing team has consistently dipped below expectations in 2018, as the single-car team saw an 18-time winner enter their Chevrolet.

Michael McDowell, after 11 races in 2017 for LFR, grabbed four lead-lap finishes and finished 24.5 on average. This year, Kahne has only one lead-lap finish but an average finish of 23.6. Improvement in some sort but not enough of what they need or what many expected in 2018.

However, they were the top underdog team on Sunday. Their “Underdog of the Race” award is their second of the year after Atlanta in February and they jump to 27th in points, their highest position yet this year.

Behind the No. 95 was Chris Buescher, who battled his JTG Daugherty Racing teammate nearly all day nose-to-tail before finishing 20th. AJ Allmendinger was one step and one lap behind in 21st.

The JTG guys wrap up the Top of the Class. They combine for three top-10 finishes this year, however, that 20th-place range has been weekly material from the duo. It’s hard to resist the urge to ask for more, but that question has certainly made the rounds in the JTG shop.

This section is larger than usual after Dover this weekend, as Kahne and the JTG guys were the ones that stood out positively — nevertheless minor positivity — in Dover.

McDowell was the cause of the first caution on Lap 3 when he got turned by Darrell Wallace Jr. and spun in Turn 4. The No. 34 Front Row Motorsports Ford only managed to finish 22nd, three laps down. The result was still his best since Texas four races ago.

Wallace suffered minor left-front damage to his Richard Petty Motorsports Chevrolet in the early incident and was quiet for most of the day, finishing 25th.

Wallace said the team is “back to the drawing board” after this weekend, tweeting: “Trust me, we’re doing the best with what we got. Unfortunately, our bad days are top 25s. I’m driving with 200 percent effort each race.”

With two top 10s this year, RPM has had their moments in their first season with Wallace and Chevrolet. This weekend at Kansas was when the year went haywire for RPM, who missed out on driver Aric Almirola to a broken back after his Kansas crash. A couple weeks later, Wallace would make his debut and kickstart a relationship that took off full-time this year.

But the team clearly still has work to do. Top 25s will only put you top 25 in points, even with an occasional top 10 due to luck, strategy or experience coming through.

David Ragan is another guy who fits this narrative, finishing 27th on Sunday for Front Row. Ragan has run every Cup race for more than a decade and continues to run mid-pack with the Ford team. Again, experience and skill can only go so far with behind-the-ball tools.

Ross Chastain has made the most of his equipment from Premium Motorsports, being the only driver of five to finish higher than 30th this season… doing it nine times. Chastain had Florida Watermelon Association on the car for the first and only scheduled time in 2018 on Sunday. He returned to Dover for the third time in the Cup Series, making it the only track he’s raced more than once at in his Cup career.

Matt DiBenedetto is also a driver who’s improved with age. Go Fas Racing has reaped the benefits of having the Californian behind the wheel with improvements in sponsors and speed since 2017. Sunday, though, wasn’t a showstopper, finishing 29th.

Gray Gaulding finished right on his average finish of 30.1, finishing 30th on Sunday for BK Racing. Landon Cassill made his fifth start for StarCom Racing, ending 31st while Reed Sorenson was 32nd.

Cody Ware crashed out after 244 laps, suffering his sixth consecutive DNF to start his Cup career for Rick Ware Racing.

Derrike Cope made his 2018 debut with StarCom, removing the team manager hat for a helmet in the team’s new No. 99 Chevrolet. The race didn’t go well, unfortunately, as Cope pounded both sides of the Turn 4 wall on lap 153. He ended 37th.

Corey Lajoie suffered his third early engine failure of 2018 in 38th. Outside the 494 laps completed at Bristol, Lajoie has only run 51 laps in the other three races due to engine issues.

Dover was the third triple-header weekend of 2018, which meant the Delaware fans had a three-day show from the 1-mile track.

And the Camping World Truck Series rose to the occasion with one of the most dramatic endings Dover has seen with Johnny Sauter and Noah Gragson out front. David Gilliland wasn’t far behind, finishing fourth for his self-owned No. 54 Toyota. The team continues through their first Truck season and scored their second top five this year.

Joe Nemechek grabbed his first non-plate top 10 since Texas in 2015 while Jesse Little finished ninth after a potential top-five day.

The XFINITY Series also had a thriller up front at the end, however, the underdogs weren’t as competitive this time. Johnny Sauter kept the ball rolling with GMS Racing, finishing sixth. Ryan Truex was 11th while Ross Chastain was the next highest back in 16th for JD Motorsports.

We’ve got some glaring issues that obviously need to be addressed. Hate this for our partners, fans and the hardworking guys @TriStarRaceTeam.

Nobody in our camp expected our program to change from the previous years, overnight! That's not how it works in this sport. We're showing highlights of progress only 11 races in..

From the “Ole Guys Rule” category… Hats off to @DavidGilliland who drove the ? outta that truck today. ??.

Devastated. Shouldn’t have pushed issue that much on pit row. Penalty 100% my fault. I will get better. Our finish shows how relentless my team is. I’m glad to be disappointed with a top 10 and some laps lead. Thank you all for the support. We will be back ready to battle at CLT

There are fewer cautions this year, therefore fewer opportunities for free passes and wave-arounds. So in a lot of races, only a handful of drivers are finishing in the lead lap. It doesn’t mean a driver is doing poorly.

Regarding the underperformance of LFR – seems that a mention of the extreme underperformance of the new Chevrolet Camaro might be relevant to the discussion. Considering disadvantage of running a Camaro, LFR is probably doing pretty good. When Chevy gets the Camaro sorted out, I would look for LFR to pick things up as well.

It would be interesting to see in any Chevrolet teams have improved results so far this year compared to the first 11 races last year in the old car. In all the discussions of the Camaro and various teams I haven’t seen that statistic.