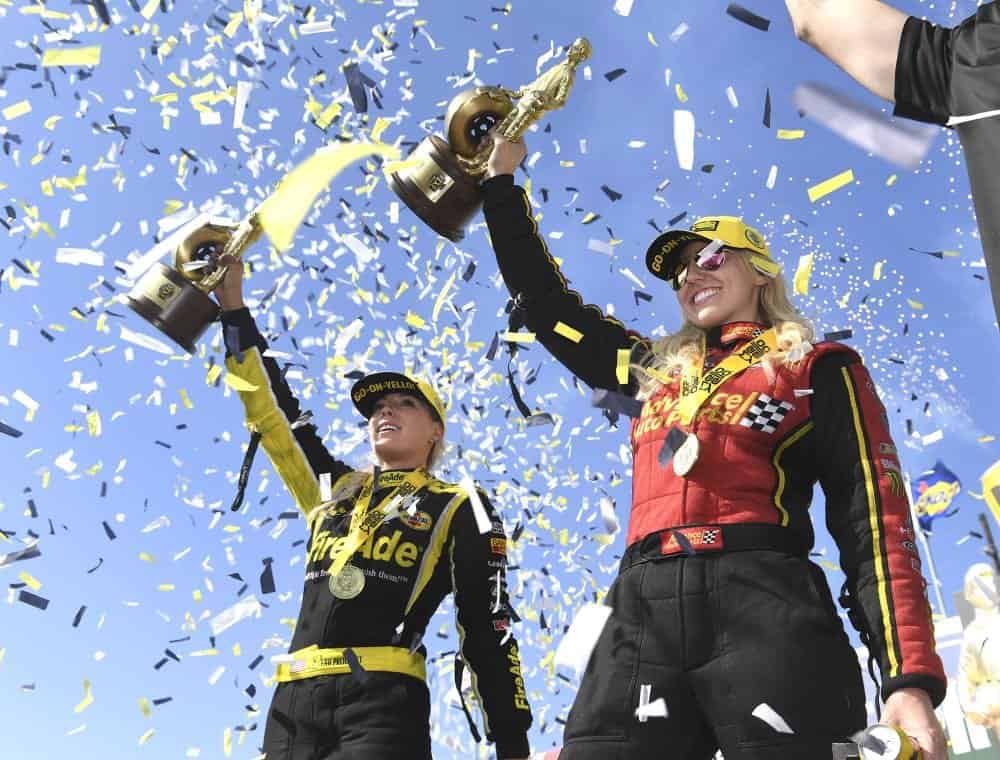 On a weekend the NHRA decided to honor female competitors, it’s extremely fitting that female drivers swept the Nitro categories, with Leah Pritchett taking the Top Fuel win and Courtney Force tops in Funny Car. It served to drive home a point the NHRA was trying to make about not just the number of female competitors, but also the history and success they’ve enjoyed in drag racing.

To date, female drivers have won 141 events in the professional categories, dating back to Shirley Muldowney’s first win in Top Fuel in 1976. Ashley Force Hood was the first to win in Funny Car in 2008, Erica Enders the first in Pro Stock in 2012, and Angelle Sampey in Pro Stock Motorcycle in 1996. That doesn’t even take into account how female competitors have scored numerous wins in the sportsman classes.

Female drivers also account for nine championships, with Shirley Muldowney and Angelle Sampey owing three each, Erica Enders two, and Brittany Force the most recent in Top Fuel last year. It started as a trickle with Muldowney back in the day but it’s turned into a flood, with both women and girls competing and enjoying success on all levels.

Their success is the key to why the NHRA enjoys such gender diversity. While women compete in other forms of motorsports, they don’t appear in such noticeable numbers and they don’t have many wins to their credit. There’s never been a female race winner in NASCAR’s top levels and there’s been only one female win in the IndyCar Series, and that is by Danica Patrick.

NASCAR hoped Patrick would set that mark in their record-book as well, but she never even got close.

So why is it that women have so much more success in NHRA?

Is it, in fact, the way the game itself is played? Can women be equal to men for a three-six-second run in a drag race, but not for 200 to 500 miles in a stock car or IndyCar? Do they just not match up physically? I have a hard time thinking that’s all it is. Many successful male IndyCar Series drivers are smaller in stature. It’s a competitive advantage in that series.

As for NASCAR, after having seen some of Patrick’s workouts, are we really convinced someone like Kasey Kahne is in that much better physical shape than she is?

On the other side of the fence, even if it is for just a few seconds, is a Funny Car really that easy to manhandle? Or womanhandle as the case may be?

The NHRA doesn’t just enjoy gender diversity though, and it’s not just on the racetrack. Perhaps the answer is not just in the game itself, but in the appeal of the sport as a whole.

It just attracts more women in the first place and their success just casts the net even wider. That could account for the diversity not just of gender but of race that NHRA seems to enjoy more than many other American motorsports bodies, on the track, in the pits, and in the grandstands.

At a time when automobile enthusiasts are bemoaning a lack of interest in cars from the younger generation and shockingly empty grandstands are appearing on television broadcasts of NASCAR races, I got stuck in a NASCAR style traffic jam trying to exit zMAX Dragway last weekend. When I started covering the Four-Wides, by the time post-qualifying driver interviews had ended in the media center and I packed up to leave, I drove directly out of the track with barely another car in sight. That’s no longer the case. The importance of diversity in that fan appeal cannot be underestimated.

It’s not the only reason, I don’t think, for why drag racing, including NHRA seems to be enjoying a bump in interest. We’ll call it a bump for now. I think it’s grown trendy, just like NASCAR once did, for other reasons, but I think the diverse appeal, and the diversity available in drivers for fan to choose certainly doesn’t hurt that growth in any way.

You want to appeal to a young girl with your seemingly masculine, car-centered sport? Give her someone to root for, and perhaps more important, someone she can watch win, that looks like her. It cannot be underestimated.