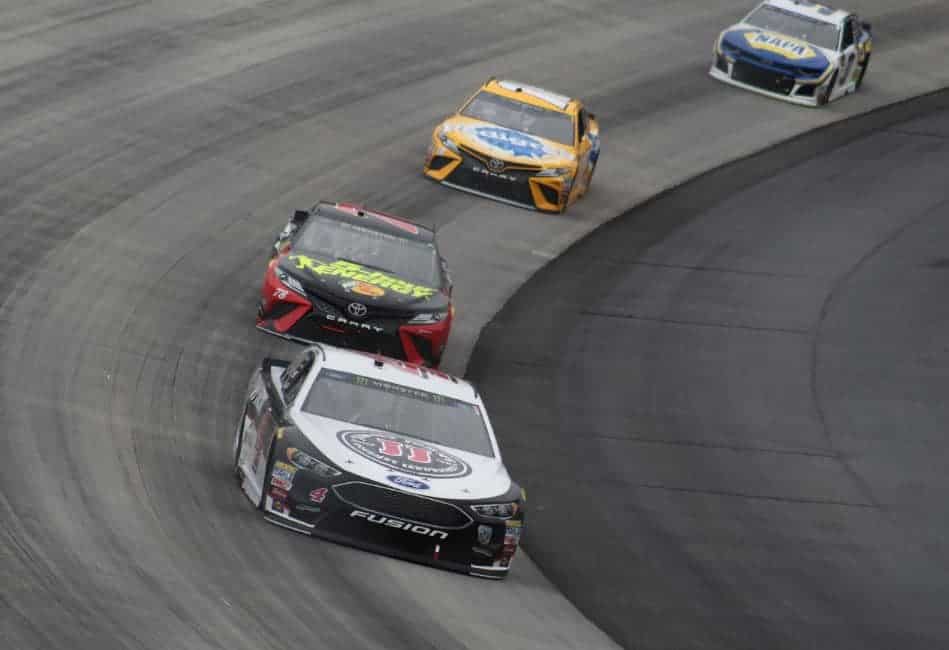 The ongoing battle between Kevin Harvick and Kyle Busch to be the top driver of the NASCAR Cup Series continued at Dover International Speedway on Sunday, and Harvick came away as the victor. Harvick now has four wins after 11 races as Stewart-Haas Racing continues to steamroll the competition.

With 64 laps to go, “Happy” overtook his SHR teammate Clint Bowyer to earn his 41st career checkered flag. He started from the front row, led 201 of 400 laps, and swept all three stages at the Monster Mile. Harvick leads all drivers with 19 playoff points.

When @KevinHarvick has won in the @jimmyjohns paint scheme four times and hasn’t won in ours once pic.twitter.com/pYbfyoINq1

Busch suffered a drivetrain failure, which ended his day after 271 laps, but was still in the hunt throughout the AAA 400. Busch said postrace that he had a top-three car but didn’t have quite the same speed as Harvick’s Ford.

Even with a disappointing finish, Busch left Dover still in the points lead. As good as he and Harvick have been, we haven’t really seen them battle each other on a week-to-week basis. It always seems that one or the other has the upper hand.

This week, it just happened to be Harvick.

And oh yeah… he had a birthday this week too.

Free pass to make fun of my little brother on his birthday? Happy BDay @KyleBusch You can keep trying, but I will always be your older, wiser big brother ??‍♂️ pic.twitter.com/735shFDFId

Logano flirted with the top 10 on Sunday but didn’t have quite the same speed as his Team Penske teammate Brad Keselowski. He earned a mere three stage points and ultimately finished 13th.

It was a quiet day for the Talladega winner, but the No. 22 driver is still second in the standings, 22 points behind Busch.

Bowyer would’ve loved it if the sky opened up in the late afternoon. Instead, he was teased with a 41-minute weather delay while leading the race. When it resumed, it took Harvick only a few laps to pass the No. 14 driver, who finished second.

Overall, it was a strong day for the Midwest native. Was he frustrated that he couldn’t hold off Harvick? Of course.

But the series visits his home track of Kansas Speedway next, so the frustration will turn into anticipation very quickly.

Sure was hoping it was a whiskey with my team guys till daylight again. Instead I guess I better keep working and drown in my sorrows solo with this healthy ? ? pic.twitter.com/h0fPWMMMXU

Larson won the pole, but that was about the only thing that went right for the Chip Ganassi Racing driver. He failed pre-race inspection three times and lost his car chief David Bryant for the race. Then he suffered a pit road penalty after he had an uncontrolled tire on lap 97. He was a lap down most of the day but managed to get the free pass late and finish 10th.

On Monday, he and his fiancé Katelyn introduced a new member to the family:

What an exciting night/morning! Baby came a few weeks early but glad I was able to be in town for it all. Katelyn did amazing and we are excited to welcome a baby girl, Audrey Layne Larson! Owen got to hang out with his new little sister this morning and loves her a bunch. pic.twitter.com/XPlADoIN5A

Busch finished fifth to earn only his second top five at Dover since 2011. Although Harvick and Bowyer got most of the headlines, give Busch some credit. Three of SHR’s four cars finished fifth or better, and he is now sixth in the standings.

Solid solid effort. Proud of everybody @StewartHaasRcng. Congrats 3 cars in the top 5. ? 41 car was solid, thank you. When @KevinHarvick passed @ClintBowyer I was like… pic.twitter.com/tpXgxUJ0wE

Suarez’s third place was the best he’s ever had on an oval and ties his career best, which came at Watkins Glen last August. He’s a former winner at Dover in the XFINITY Series, so his result isn’t a fluke. Perhaps it’s a sign that the Joe Gibbs Racing sophomore is finding his groove. The first quarter of the season was weak, but he now has three consecutive top 10s.

Blaney finished eighth, so that’s where he finds himself in this week’s power rankings. The No. 12 car didn’t have the same speed as the No. 2, though they certainly showed more speed than the No. 22 team.

Blaney is now seventh in the standings, which isn’t bad considering this was his first top 10 since Texas in the first week of April.

If Miles the Monster had Ryan @Blaney's flow.

While Harvick has led the way this year for the blue ovals, Keselowski has often been riding in his shadow as the second-best Ford. Sunday was no different as he led 108 laps and finished sixth.

Not a bad day @MonsterMile

Heading back to see my girls. Got a big mother’s day weekend coming up ??‍?‍?

The defending champion finished fourth, but he was frustrated with it. Considering his track record at the mile oval, you can understand why he wasn’t pleased.

However, this was his first top 10 since Martinsville, so he has to feel good about that. Four consecutive weeks of finishes of 14th or worse are over and now he goes to the track he swept last season.

Why not have rankings for the most power to bring out yellow flags. We know who they are.