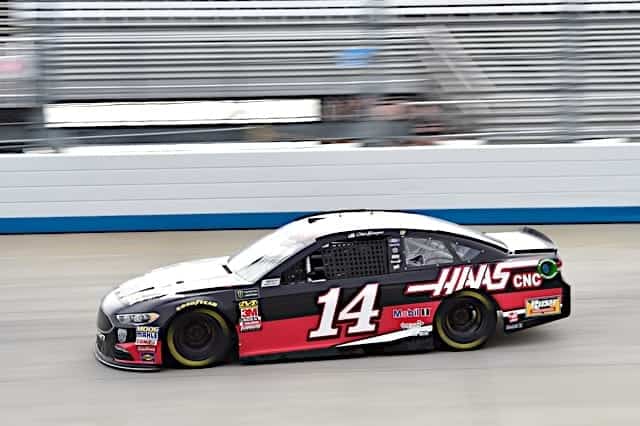 The N0. 14 and No. 19 teams each violated rules related to the rear windows. Dover runner-up finisher Clint Bowyer‘s window did not meet the specifications for keeping the rear window glass rigid in all directions at all times, thus violating Section 20.4.8.1. Crew chief Mike Bugarewicz will be fined $50,000 and car chief Jerry Cook will be suspended for the next two MENCS two races. This is the second time this season that an SHR team violated this section as Kevin Harvick lost the benefits of his Las Vegas victory due to a similar penalty.

Daniel Suárez‘s rear window decklid on his third-place finishing car was not properly sealed, thus violating section 20.4.8.1 of the NASCAR rules. Crew Chief Scott Graves has been fined $50,000 and car chief Todd Brewer will be suspended for the next two MENCS races. Both Suárez and Bowyer’s infractions were found post-race and had modifiers applied as a result.

Both teams were deducted 20 driver and owner points.

Austin Dillon‘s No. 3 car’s splitter did not meet specification, violating section 20.4.3.a&d of the rules. Crew Chief Justin Alexander was fined $25,000 and the car chief Greg Elbert was suspended for the next MENCS race. No modifier was added because the infraction was discovered prior to the race. Dillon was forced to start at the rear due to the issue.

In the XFINITY series, the No. 7 JR Motorsports team was found to have violated section 20.14.2.h of the NASCAR rules because the car’s truck trailing arm spacer/pinon angle shim surfaces were not in complete contact at all times. The No.7 Justin Allgaier piloted car went to victory lane last Saturday (May 5) in Dover.

The JR Motorsports team was penalized 25 driver points and 25 owner points. Crew Chief Jason Burdett was fined $25,000 and suspended for the next two XFINITY series events. The team will not receive the playoff benefit for the win as well as the 5 playoff points. The team will keep their $100,000 Dash 4 Cash bonus as well as other competition benefits.

Like the MENCS Richard Childress No. 3 team, the XFINITY No. 3 team also had a splitter that did not meet specifications, violating section 20.4.3.a&b of the NASCAR rules. Crew chief Nick Harrison was fined $10,000 and car chief Michael Scearce was suspended for the next XFINITY Series event. The No.3 RCR team driven by Jeb Burton finished 12th in the XFINITY series race at Dover.

All teams have the right to appeal their penalties to the National Motorsports Appeals Panel.  JR Motorsports has already announced that they will not appeal the ruling.

Finally, Michael L. Hayden has been suspended indefinitely from NASCAR. The suspension stems from a fight that occurred Friday (May 4) in the garage where Hayden allegedly struck JP Motorsports owner Jerry Hattaway, breaking his jaw. According to statements from the Dover Police Department to the Delaware NewsJournal, the fight occurred after Hayden had quit JP Motorsports.

splitters supposed to have been the focus of inspection and one still gets through?

Poor Austin Dillon, even a cheating race car could not keep this wonder boy anywhere near the lead lap.

NASCAR is going to lose the African-American fans or gain a Sharpton/Jackson protest by suspending Michael Hayden. The bigger question is what did Jerry Hattaway say to deserve this? If the punch is alleged, how did his jaw get broke?

I don’t understand why the Dash 4 Cash money was not taken away from Allgaier. It should go to the next eligible driver.

In NA$CAR it pays to cheat. There’s a difference between pushing the envelope and cheating. If the cheaters forfeited ALL their winnings it would stop.