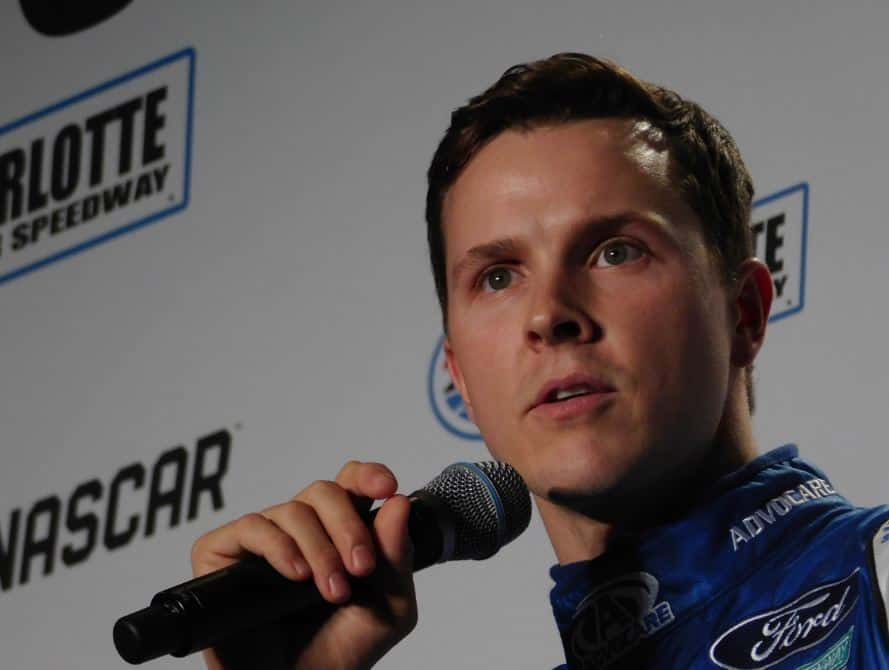 Roush Fenway Racing announced a few weeks ago that veteran Matt Kenseth would split time in the No. 6 Ford with Trevor Bayne for the remainder of the season. This Saturday’s race at Kansas Speedway, May 12th, will be Kenseth’s first in the car, marking the first time since 2014 that Bayne has not been in the No. 6. Bayne has struggled during his time with RFR in the Monster Energy NASCAR Cup Series, but does this move signify the end of his NASCAR career?

Bayne seems like a great guy, and I have a lot of respect for him. But it is time for him to make way for someone else.

There are only 36 full-time driving jobs in the premier series of stock car racing. With there being thousands of racers both across America and outside the country, there has to be someone that deserves one of those seats more than Bayne. Unless a driver has the funds to make it worth a team’s while, there is no point in having a driver in the car who doesn’t seem capable of competing for wins every week, regardless of how good the car is.

Bayne has proven in every race since the 2011 Daytona 500 that he is a good driver, but a not a great one. His aggression is admirable, but racing is about two things: results and getting the most out of your equipment – both areas in which Bayne has not fared well.

Since winning the Great American Race in his second Cup start, Bayne has competed in 175 Cup competitions. In that span, he has earned only four top fives and 15 top 10s. He’s raced three full seasons and never finished higher than 22nd in the standings. Going into this week, he’s 29th in the standings and has yet to crack the top 10 this year.

In 2011, Bayne won one race while driving for RFR in the XFINITY Series, while his teammate Ricky Stenhouse Jr. won the championship that year and the next one too. Bayne raced full-time in XFINITY from 2013-2014 as well and won only one more race, while teammate Chris Buescher went on to win the 2015 title.

Those NXS cars for Roush were good, and Bayne only netted two wins and never finished higher than sixth in the standings. But still, Bayne got the bump up to the Cup level off of the popularity of that Daytona win and the hope that it could happen again. Ryan Reed and Brennan Poole are the two most recent drivers to finish sixth in the NXS standings. Without the Daytona win, Bayne’s career would probably be on the same trajectory of those two.

Bayne took over a car that Carl Edwards used to win two races with and make the playoffs in the previous year. He didn’t notch a single top five that year, and the car fell 20 spots in the standings from Edwards’ final Roush campaign. Bayne hasn’t found his way back to Victory Lane, and while the equipment hasn’t been great, its been enough for Stenhouse to win twice.

Just like in XFINITY, Stenhouse has outperformed Bayne every year since Bayne started driving the No. 6 car in Cup. He’s more than doubled Bayne’s top 10 count during that time and he finished nine spots higher in the standings last year. Stenhouse already has two top fives this year and only has one finish worse than 30th, compared to Bayne’s four.

With Kenseth coming in, this is likely the end of Bayne’s time at Roush and I don’t see anyone else giving him a shot. But hey, he can always say that he won stock car racing’s biggest race and drove for two of the most legendary car owners. For a 27-year-old, that’s not too shabby.

Bayne still has plenty of life to live, and it would be awesome to see him use his platform to benefit others like him who suffer from multiple sclerosis. I truly wish Bayne the best in whatever he does next. – Michael Massie

In 2011, Bayne was an essentially unknown 20-year-old driver driving for Jack Roush in the XFINITY Series. He was slated to run a partial Cup schedule for Wood Brothers Racing beginning with the Daytona 500.

No one could have predicted what was to come that day based on Bayne’s stats in his lone full-time XFINITY season. But in only his second career Cup Series start, Bayne became a Daytona 500 champion, holding off Carl Edwards for the win.

No one could have predicted the level of success Bayne would have over the next several years of running part-time for the Wood Brothers and in the famed Roush No. 6 Ford. That’s because there essentially hasn’t been any success since.

Now, Roush has lured his longtime former driver and past Cup series champion Matt Kenseth back into action. The move, however, comes at the expense of Bayne as he will be out of the car for an undisclosed number of races, while Kenseth attempts to bring the team back to the front of the pack.

So what happens to Bayne now?

There’s still a place for Bayne behind the wheel. He’s only 27 years old, with at least a decade of competitive driving still ahead of him. Even if it comes to pass that his time at Roush Fenway Racing is basically over with, there are multiple teams that would probably jump at the chance to hire the Daytona winner.

Additionally, he might benefit from a change of scenery. Bayne has only driven for two teams in his Cup career and neither at the time would be considered a top-level ride.

After 2011, Bayne ran three more part-time campaigns in the No. 21 without a single top-five finish. That isn’t entirely his fault though. The Wood Brothers Racing win at Daytona was the team’s first in nearly a decade, despite former race winners driving for the team, including Ricky Rudd and Ken Schrader. So it isn’t as though Bayne was in top performing equipment there.

Then, he moved to the Roush No. 6 and saw a slight increase in the level of his success. His first year was a near disaster, with only two top-10 finishes to show for his efforts. The next two seasons yielded four top fives and 11 top-10  finishes in 72 starts. A bit better, but nowhere near where he or the team were expected to be.

However, Roush Fenway Racing wasn’t operating at the same level it once was either. When Stenhouse won two races in 2017, it was the first time the team had visited Victory Lane since Bayne joined the team two years earlier.

The RFR No. 6 car hasn’t won since 2011, either. Interestingly enough, it was the July race at Daytona in the series’ first race thereafter Bayne’s win.

There have been dozens of comparisons between the trajectory of Bayne’s career and that of other drivers in Cup history. and I’d liken it to longtime Cup regular Bobby Hillin Jr.

Hillin won his first Cup race at Talladega in 1986 at the age of 22. He never returned to Victory Lane at the top level of stock car racing. Over the next decade and a half, Hillin made nearly 300 more starts for a variety of teams. He also drove in 115 XFINITY Series events, winning twice.

I wouldn’t expect to see Bayne at RFR much longer. The writing is on the wall with this move.

But plenty of teams will have interest in a young, marketable Daytona 500 winner with some strong sponsorship ties, namely Advocare. Advocare has stuck by Bayne and is still insisting he be in the car this year for the races they signed on to sponsor. The fact that they prefer Bayne over Kenseth says a lot about that driver/ sponsor connection.

Perhaps, Bayne lands back in the XFINITY Series. He’s won at that level already and could follow drivers like Elliott Sadler, who found competitive life after Cup racing. With the constant turnover at that level, there’s bound to be an open seat somewhere for a former winner.

Bayne, like Hillin, is good enough to have a place in NASCAR. He could easily enjoy further success, likely with another team. Will he set the world on fire? Probably not. He might not ever win a championship or another Daytona 500. He might not ever even win one more race.

That doesn’t mean there is no room in NASCAR for Bayne. – Frank Velat

Matt left Roush for the greener pastures of JGR. Now he’s back with Roush, supposedly to help them improve their cars. This begs the question, why couldn’t Roush keep up with Gibbs when Kenseth was full time with Roush?

Kenseth was not a savior then. How will he bring success to Roush now?