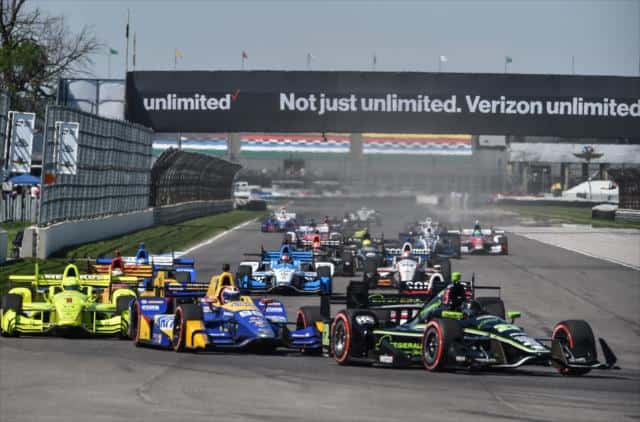 Ah, the month of May. It’s that time of the year again where the Verizon IndyCar Series begins the build for the 102nd Indianapolis 500. The build starts this weekend with the IndyCar Grand Prix, and on Saturday, business begins to pick up.

Team Penske evidently has their program together both this season and in this race. The Penske organization is the only to have two victories this season, both by Josef Newgarden. Also, Team Penske has won three of the four editions of this event, and its current driver lineup has won every IndyCar Grand Prix (Simon Pagenaud won the 2014 race with Schmidt Peterson Motorsports).

Coming off of his second victory of the season, Newgarden heads into the month of May with a 13-point advantage over second-place Alexander Rossi in overall points with Sebastien Bourdais 39 points behind in third.

The top three in points are the only drivers who have victories, Newgarden with the most at two. Rossi won at Long Beach and Bourdais at St. Petersburg. Graham Rahal and James Hinchcliffe round out the top five in points with a 40-point split between first and fifth.

Saturday’s race is the final chance for drivers to make a statement before the road to the Indianapolis 500 begins. Some drivers will look to build momentum while others will look to continue the momentum. Defending winners Pagenaud and Power both look to shun away their performance from the first four races, and it would be the perfect time for them to turn it around before heading into “The Greatest Spectacle in Racing.”