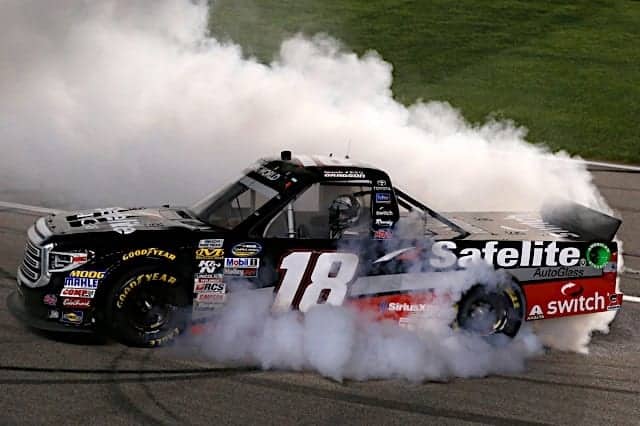 No one could deny Noah Gragson the victory on Friday night in the Camping World Truck Series at Kansas Speedway. Not even a Kyle Busch, who’s chasing his record-tying 51st victory in series, could either.

Gragson ran away for his second career Trucks victory after leading 128 of 167 laps while Busch and Stewart Friesen battled for second. After Myatt Snider ran out of fuel from the race lead with six laps to go, Gragson grabbed the top spot and never looked back, earning his first win of 2018.

Gragson’s truck clicked from qualifying to the checkered flag by winning the pole and both stages. Matt Crafton won the sole practice session and had the fastest lap during the first round of qualifying. Crafton would pass Gragson on the first lap and lead the initial four laps before the No. 18 Toyota regained the lead on Lap 5 and held it to the end of Stage 1.

Ben Rhodes took two tires during the caution between stages to take the lead but the two-tire gamble wouldn’t pay off. Gragson took the lead back from Rhodes and began ticking away laps. A little into the second stage, Rhodes would begin complaining about issues under the hood that hindered the performance. Rhodes would end up finishing the race 18th, five laps down.

Gragson would have to hold off a hard-charging Brett Moffitt to win the second stage of the evening. Justin Haley took two tires during the stage-ending caution and take the lead over Gragson.

Much like Rhodes earlier in the race, the two-tire gamble cost the No. 24 team of Haley a ton of positions, Gragson would take the lead back as Moffitt followed. With around 73 laps remaining, Moffitt had to pit as he was complaining to the crew of voltage issues. The team would have to change the battery and go a few laps down ultimately knocking the No. 16 out of contention. Caution would come out for debris setting up the battle between Gragson and Friesen.

Gragson would pull away with a push from John Hunter Nemechek but Friesen quickly pulled closer and closer to the No. 18 and he’d take the lead just as the caution would be shown for a spinning Bo LeMastus.

While under caution, Friesen’s shifter would break right at where the grooves form for the knob. He’d lose the lead and a couple of positions. If it hadn’t been addressed that the knob was gone, you’d never known because Friesen didn’t falter. Friesen pushed ahead and took the lead back.

As green-flag pit stops began, Rudy Fugle brought Gragson down pit road for four tires. Friesen and Busch would take two-tires on their stops which would ultimately put them in front of Gragson, who would use his fresher tires to his advantage to begin clicking down trucks. He’d ultimately pass the Nos. 52 and 18 for third before passing Darrell Wallace Jr. for second.

Busch would hold off Friesen for second, his 51st victory will have to come another night. John Hunter Nemechek finished the race in fourth while Johnny Sauter would round out the top five.

Next weekend the trucks head home for the NC Education Lottery 200 from the Charlotte Motor Speedway. The race goes live on FOX Sports 1 next Friday, May 18 at 11 p.m. ET.