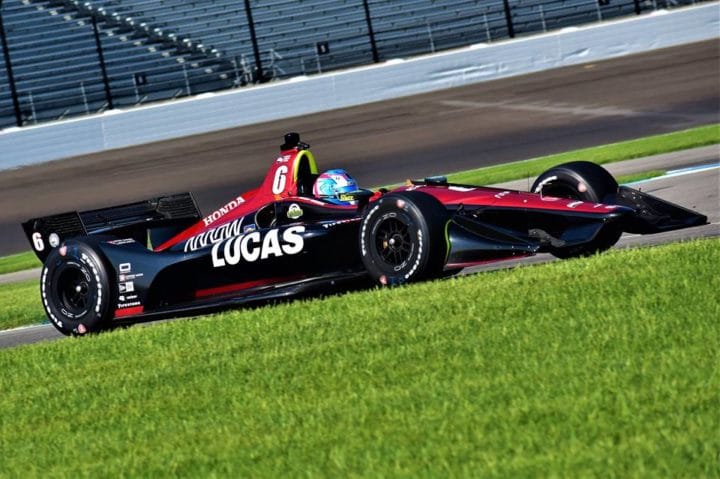 Robert Wickens continued his impressive IndyCar rookie season Saturday (May 12) in Indianapolis. For the second time in 2018, Wickens started on the front row for a race. But unlike St. Petersburg, where he failed to finish the rookie made the most of his IndyCar Grand Prix appearance. Throughout the event, he threatened Will Power for victory before ultimately ending up in third place.

“It was a good, hard fight,” said Wickens about his battle with Power. “On the first stint there, when I was on reds and he was on blacks we fought hard but it was fair. I always like to give people the same respect they give me and he gave me more than enough space so I felt like I needed to do the same thing. It was a great race. Unfortunately, I was hoping to have a bit more pace there on the blacks to maybe hold him off but it just didn’t happen.”

Despite losing out on Victory Lane, Wickens has plenty to smile about. The rookie battled seasoned veterans like Power, Sebastian Bourdais, and Scott Dixon cleanly throughout the event and earned their respect. He heads into the Indy 500 as one of the race’s promising freshmen, armed with the speed and handling to contend.

He’ll also have a little more experience with pit strategy. Saturday’s IndyCar Grand Prix threw the rookie a curveball that cost him speed down the stretch.

“It is the first time I have had to save fuel like that,” said Wickens. “A little bit gutted but really happy that we didn’t run out of fuel. The whole time, they were giving me a number and I wasn’t able to hit it and they were like we need this and I was trying. We had to go past that number because I didn’t save enough at the beginning.

“It was a stressful afternoon, I was really happy in the first couple of stints and then that final one there with the fuel save kind of blew it wide open.”

Now that the IndyCar Grand Prix is out of the way, the focus is on winning the “The Greatest Spectacle in Racing”. Wickens looks to earn Schmidt Peterson Motorsports its first Indy 500 victory on Memorial Day Weekend. He’ll also seek to be the first rookie to win since Alexander Rossi pulled the upset in 2016.