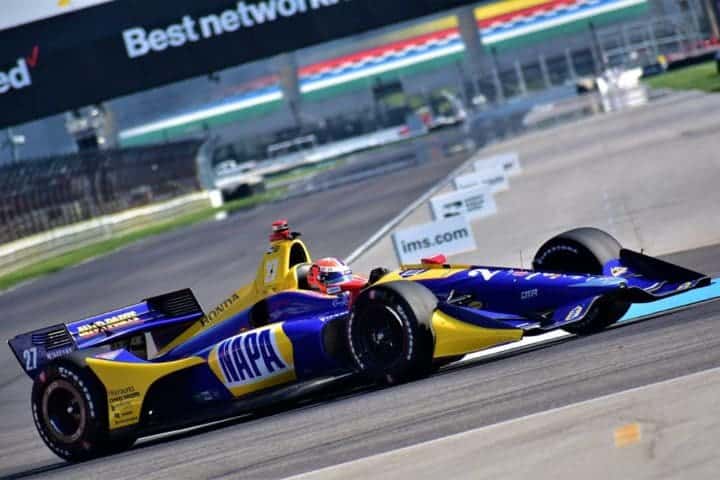 The more teammates you have in racing, the better off you are when you have a car that is struggling.

That teamwork made the difference Saturday (May 12) for Andretti Autosport driver Alexander Rossi in the IndyCar Grand Prix.

Rossi had speed in Friday’s INDYCAR practice but failed to move into the Firestone Fast Six during qualifying. Then, on Saturday Rossi was just 18th in warmup practice. A lack of speed had the driver of the No. 27 a little nervous about the race.

“I was pretty concerned after this morning’s session,” said Rossi. “For some reason, the No. 27 NAPA AUTO PARTS Honda was losing pace through nothing more than just car balance as each run went on, so it was a little bit of a mystery to us.”

But with four cars at Andretti Autosport, one of those should be better than the other three. During warmup practice, Ryan Hunter-Reay was third, resulting in an opportunity to help his teammate. In an effort to help Rossi out, that setup was put on the car and, just like that, he turned the team’s weekend around.

“We’re very fortunate to have a four-car team,” said Rossi. “We were able to better the setup for Ryan [Hunter-Reay] on his car, and the No. 28 DHL car probably saved our weekend. Big shout out to them on the team effort. It was a good recovery – just disappointing that we couldn’t finish fourth. I think we had the opportunity to save fuel in that stint and we just didn’t make it happen, so we need to look into that but overall a good recovery by the whole team.”

The end result for Rossi was a strong performance (fifth) and a good points day.

Now, with the IndyCar Grand Prix out of the way the focus turns toward the 102nd Indianapolis 500. Rossi won the event as a rookie in 2016 and looks to earn his second victory in the race. Should Rossi prevail, he’d join ten other drivers as two-time winners of the biggest open-wheel event in America.

“I’m very excited to get to work on Tuesday,” Rossi said. “We’ve been very fortunate with such good cars here so I’m looking to fight and go two out of three.”