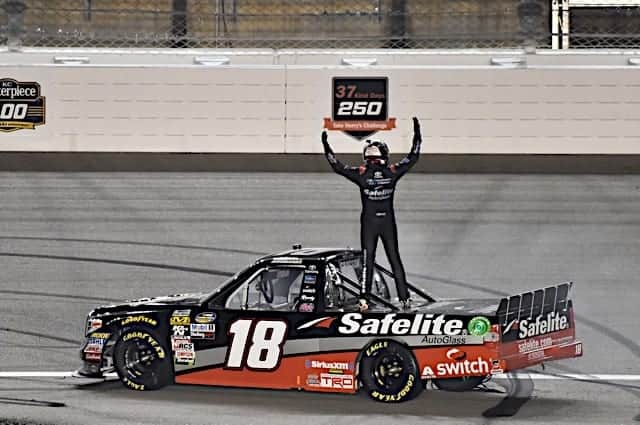 In a Nutshell: Noah Gragson scored his second career Camping World Truck Series win in Friday night’s 37 Kind Days 250 at Kansas Speedway. The driver of the No. 18 Toyota beat out boss Kyle Busch by 1.558 seconds to grab his first win of 2018. Stewart Friesen, John Hunter Nemechek and Johnny Sauter rounded out the top five.

Turn up the volume! ?@NoahGragson has this message for you after tonight’s dominating win at @kansasspeedway! pic.twitter.com/enyMfkmHfK

Who Should Have Won: Hands down, Gragson was the driver to beat. A week after starting on the pole and nearly winning at Dover before wrecking himself while racing for the lead, the 19-year-old started on the pole again Friday night. He led five times for a race-high 128 of 167 laps, won both stages and parked it in Victory Lane. In the end, a green flag pit stop for four fresh tires compared to Busch and Friesen’s two apiece made the difference that allowed Gragson to race to the lead and the win.

After back-to-back finishes outside the top 20, Stewart Friesen rebounded with a strong run Friday night. He started eighth and ended the first stage 10th, but it was at the end of the second stage where the driver of the No. 52 Chevrolet found his way into the top five.

Midway through the final stage, Friesen overtook eventual winner Gragson for the lead and held the top spot for six laps, but a green flag pit stop where Gragson took four tires compared to Friesen’s two turned out the be the difference maker.

Friesen also had a late-race tangle with Kyle Busch as the two raced for position while a few other teams attempted to stretch their fuel during a late-race green-flag run.

“To race a guy as talented as Kyle (Busch) is pretty darn cool,” he explained. “It’s something I never really dreamed about doing. At that point, we had both pitted. In my head, we were racing for the win to cycle back through.

Busch was later asked about whether he accepted Friesen’s apology, to which he responded: “not at this moment.”

When the dust settled, Friesen walked away celebrating a third-place finish, his best result of the 2018 season.

“The [No.] 52 team battled all night,” Friesen said. “We were a little tight in the first segment and (crew chief) Tripp (Bruce) made a great adjustment and got us right from a 12th-place truck to in competition. That was cool. It’s cool to be racing guys like Kyle (Busch) and Noah (Gragson) and that race team (Kyle Busch Motorsports) for wins now.”

It wasn’t all easy for the driver of the No. 52 though. Late in the race, his shifter broke under caution, causing him to drop positions for the ensuing restart.

“The shifter knob broke off there once we got the lead,” he said. “Trying to figure out where the knob actually was to make sure it didn’t under the pedal or something and trying to save fuel, for whatever reason, I cycled the ignition and it went dead. I had to power it back up.”

The fate of the broken knob?

“That’s a good question,” he said with a grin. “I have no idea. It might have gone under the seat; I’m not really sure where it ended up.”

For Friesen, it’s a matter of when, not if, he makes it to Victory Lane, especially considering the alliance his team made with GMS Racing last season and the way it has elevated Friesen’s performance since. But you won’t find the driver of the No. 52 looking at it that way.

“Wins are tough and that’s no matter what division you’re racing,” Friesen continued. “They’re hard to come by. You can have the best and be great all night and then have something not go your way. I hate to say it, it’s cliche, but we’re gonna keep working hard, keep our heads down and when they happen, they’ll happen.”

Friesen will likely face some sort of penalty next week once NASCAR has some time to look over the violation found on his truck during post-race inspection.

The trucks of Cody Coughlin, Kyle Busch, and Noah Gragson have all cleared post-race inspection. No issues.

No trucks taken to R&D center and no lugnut issues. #NASCAR

John Hunter Nemechek, who’s running a part-time Truck Series schedule while racing in the XFINITY Series part time, returned to pilot the No. 8 Chevrolet at Kansas, hoping he could follow in his father’s footsteps with a win (Joe won in the Cup Series at Kansas in 2004).

"This is good stuff."

After posting the 14th-quickest lap time in qualifying, Nemechek was forced to the rear of the field when the green flag flew due to unapproved adjustments.

He had a relatively uneventful race, though there were a couple times Nemechek found his way into a three-wide battle on restarts. He methodically worked his way through the field and ran inside the top five before settling into a fourth-place finish.

Was a fun night! Had to start at the rear for changing the ECU after qualifying. We worked on our truck all night and came home p4! Learned a lot tonight. Now to apply that in the @XfinityRacing car in a couple weeks! #nemechek42

While it’s not at all surprising to see Nemechek excel pretty much anywhere, it’s easy to forget that NEMCO Motorsports is an organization running on a shoestring budget, like a large number of teams in the Truck Series right now. And to see the driver of the No. 8 continue to compete, despite not running every race speaks volumes for him as a competitor and the organization and its ability to keep up.

Wow these @NASCAR_Trucks guys get after it!
Finished 11th tonight at @kansasspeedway but learned a ton. The 25 @PerformancePOil @GMSRacingLLC boys gave me everything they had but just lacked some speed. A good step in the right direction but fuel gamble just didn’t pay off?‍♂️

Points Update: Johnny Sauter maintains his point lead, though race winner Noah Gragson moved to within 35 markers of the 2016 champion. Grant Enfinger is third, followed by Brett Moffitt and Ben Rhodes who are tied to round out the top five. Matt Crafton sits sixth, 70 points behind Sauter, followed by Stewart Friesen. Teammates Justin Haley and Dalton Sargeant are eighth and ninth, respectively. Myatt Snider rounds out the top 10.

Look at him go! Noah Gragson climbs the fence after his NASCAR Truck Series WIN in Kansas. pic.twitter.com/u3mbgCkskB

Man, that was fun! We were gonna win running like we were. So we had to switch it up. Love it! Go big or go home!

Had that top rolling on restarts!?

Nothing worth having in life comes easy. There’s nothing that comes close to the feeling of pushing through the hard days when it seems like nothing went right and using it to grow. When you grow, you can face bigger challenges. There’s no challenge too big. Always looking ahead.

Thank you all for the support and the encouragement. Especially after tough nights like tonight, it’s good to know you all still believe in me too. High points always follow the low points. Can’t wait for Charlotte next week! ?? #BEL15VE

Up Next: The Camping World Truck Series heads east Charlotte Motor Speedway next Friday night. Coverage for the North Carolina Education Lottery 200 begins Friday, May 18 at 8:30 p.m. ET on FOX Sports 1; the race can also be heard on your local MRN affiliate or SiriusXM NASCAR Channel 90.

I’m sure Baby Busch was yelling in his radio “Doesn’t that guy know who I am?????”