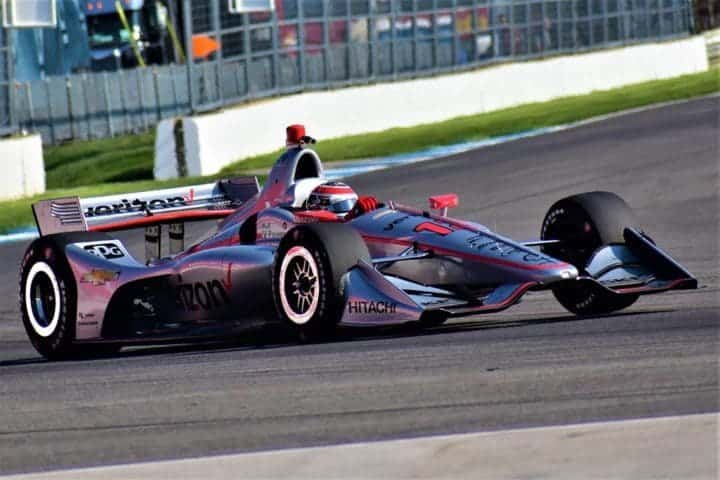 Saturday’s race had a little bit of everything from tire and fuel strategy to a threat of rain, but in the end, no one was going to deny Will Power the victory. Power had to save fuel and hold off Scott Dixon to earn his 33rd career victory and third in the IndyCar Grand Prix.

The race started with Power and Robert Wickens bringing the field into the first turn. As they entered the first corner, Simon Pagenaud made a gutsy move to gain position. Ed Carpenter Racing’s day took a nosedive as Jordan King rear-ended Pagenaud in Turn One sending both cars into the gravel trap. Pagenaud escaped while King wound up stuck resulting in the first full-course caution of the afternoon.

Before the caution came out though, Spencer Pigot, Ed Carpenter Racing’s second driver, bounced on the rumble strips in Turns Five and Six and went airborne. His car was uncontrollable in mid-air and made contact with the No. 30 of Takuma Sato.

On the restart, Power rocketed away while the battle for second would begin and end between Sebastien Bourdais and Wickens with Wickens taking the spot. Wickens started stalking Power for the lead. He and Power both pitted on lap 21 with Wickens putting reds on while Power put on blacks. Power came off pit road first, but Wickens would have the preferred tire compound for a short run.

The battle throughout this pit cycle depended on who could do better on their respective tires with Wickens on blacks and Power on reds. Once Rahal came down pit road, Wickens took the lead back. Power continued to chip away at the lead Wickens had until he was able to finally catch him in Turn One on lap 49 and retake the lead.

It looked as if Wickens was in a dangerous situation with Power breaking the lead open. With less than 30 laps remaining, Josef Newgarden sought to make the pass on Bourdais in Turn 12 for third, but he bounced over the rumble strips which resulted in the points leader spinning and stalling setting up a full-course caution that would put Wickens back in the picture.

The third and final pit stop would be the money stop for the leaders. Both Wickens and Power’s pit crews had stellar stops putting both of them out side-by-side with Power having the advantage and lead by mere inches. Dixon, someone who hadn’t been in the discussion all day long, somehow managed to be in third coming off pit road. It was hard to determine which news was going to be worse for Power. The fact that he’d need to be in super save mode or the fact that fuel save master Dixon was sitting in third. Throw in the fact that rain was creeping into the picture and the end of the race was setting up to be significant.

With the laps winding down, Power ran at his own pace while saving fuel. Behind Power, Dixon passed Wickens for second but never got the chance to steal the victory. Power took the checkered flag earning his first victory of the 2018 season and the 200th IndyCar Series victory for Roger Penske.

Dixon and Wickens would round out the podium while Bourdais and Alexander Rossi rounded out the top five. Multiple cars only had enough fuel to make it past the checkered flag including fifth-place Rossi. Power had enough to make it around the Indy circuit another time and to drive it into victory lane.