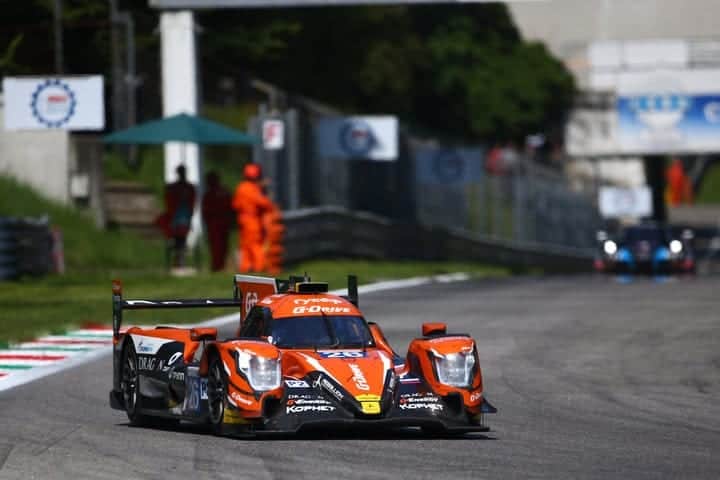 G-Drive Racing’s Roman Rusinov, Andrea Pizzitola and Jean-Eric Vergne claimed overall victory Sunday (May 13) in the European Le Mans Series’ 4 Hours of Monza.  It is the second victory in as many weeks as the trio won the LMP2 class in the FIA World Endurance Championship 6 Hours of Spa-Francorchamps.

DragonSpeed’s Ben Hanley started from the pole and immediately pulled away from the pack.  Meanwhile, Rusinov was able to get past Duqueine Engineering’s Pierre Ragues on the start for second.

Shortly afterwards, the Safety Car came back out due to a big wreck for GRAFF Racing’s Alexandre Cougnard in Lesmo No. 2.  Cougnard went straight off and hit the tires head-on.  Cougnard walked away, but his ORECA 07-Gibson was heavily damaged.  GRAFF’s day came to a complete end a half-hour later when Enzo Guibbert crashed the second car at the Variante Ascari to draw another Safety Car period.

The early Safety Car periods resulted in the running order shifting as teams pitted.  The most serious of the Safety Car periods was the fourth one, brought out when M. Racing-YMR’s Natan Bihel was spun exiting Lesmo No. 2 by BHK Motorsports’ Francesco Dracone.  Bihel was then hit by AT Racing’s Alexander Talkanitsa Jr.

Both drivers were ok, but done for the day.  After this crash, the field calmed down for the second half of the race.

Shorty after the race went back under green, G-Drive Racing’s No. 26 with Pizzitola at the wheel assumed the lead.  With green-flag racing, the lead slowly continued to expand.  The G-Drive trio managed to lead the entire second half of the race to claim victory.

The margin of victory was 29.828 seconds over TDS Racing’s Loïc Duval, François Perrodo and Matthieu Vaxivière.  The team had to charge from the rear after Vaxivière’s pole time was disallowed due to unapproved tape.

The top six finishers fielded ORECA 07-Gibsons.  The best non-ORECA 07 was Panis Barthez Competition’s Ligier in seventh, nearly 100 seconds behind.  The best Dallara was the Cetilar Villorba Corse No. 47 in ninth, one lap down.

Eurointernational’s Giorgio Mondini and Kay van Berlo inherited the LMP3 victory late, but the win should have gone to defending LMP3 champions John Falb and Sean Rayhall.  With just 10 minutes to go, Falb was hit by the IDEC Sport No. 27 Ligier JS P217-Gibson of William Cavailhes.  That contact cut the right rear tire and caused Falb to spin at the Variante Della Roggia.

Due to the placement of the overall winners and fuel management issues, Mondini and van Berlo ended up on a lap of their own.  Second went to 360 Racing’s Ross Kaiser and Terrence Woodward.  The team was originally going to run three drivers, but James Swift was not allowed to race after failing to set a time within 110 percent of the pole time in class.

United Autosports’ No. 3 Ligier for Anthony Wells, Garret Grist and Matt Bell finished third, followed by Inter Europol Competition’s No. 13 for Jakub Smiechowski and Martin Hippe.  Hippe was right on van Berlo’s tail before having to pit for a splash of fuel.  Falb and Rayhall had to settle for a highly disappointing fifth.

The GTE class was the one that was least in question.  Spirit of Race’s No. 55 Ferrari 488 GT3 driven by Duncan Cameron took the lead from Ebimotors’ Riccardo Pera.  during the first Safety Car period.  From that point on, no one could touch the green and white Ferrari as Cameron, Matt Griffin and Aaron Scott took a well-deserved victory.

Spirit of Race’s margin of victory was 60.433 seconds over Proton Competition’s No. 77 Porsche shared by Marvin Dienst, Marc Lieb and Christian Ried.  Ebimotors’ Porsche for Pera, Fabio Babini and Raymond Narac were third, 89 seconds back.

The European Le Mans Series itself takes a couple of months off before returning at Austria’s Red Bull Ring in July.  However, a number of teams will be competing at Le Mans.  The Le Mans Test Day is scheduled for June 3 and attendance is required.