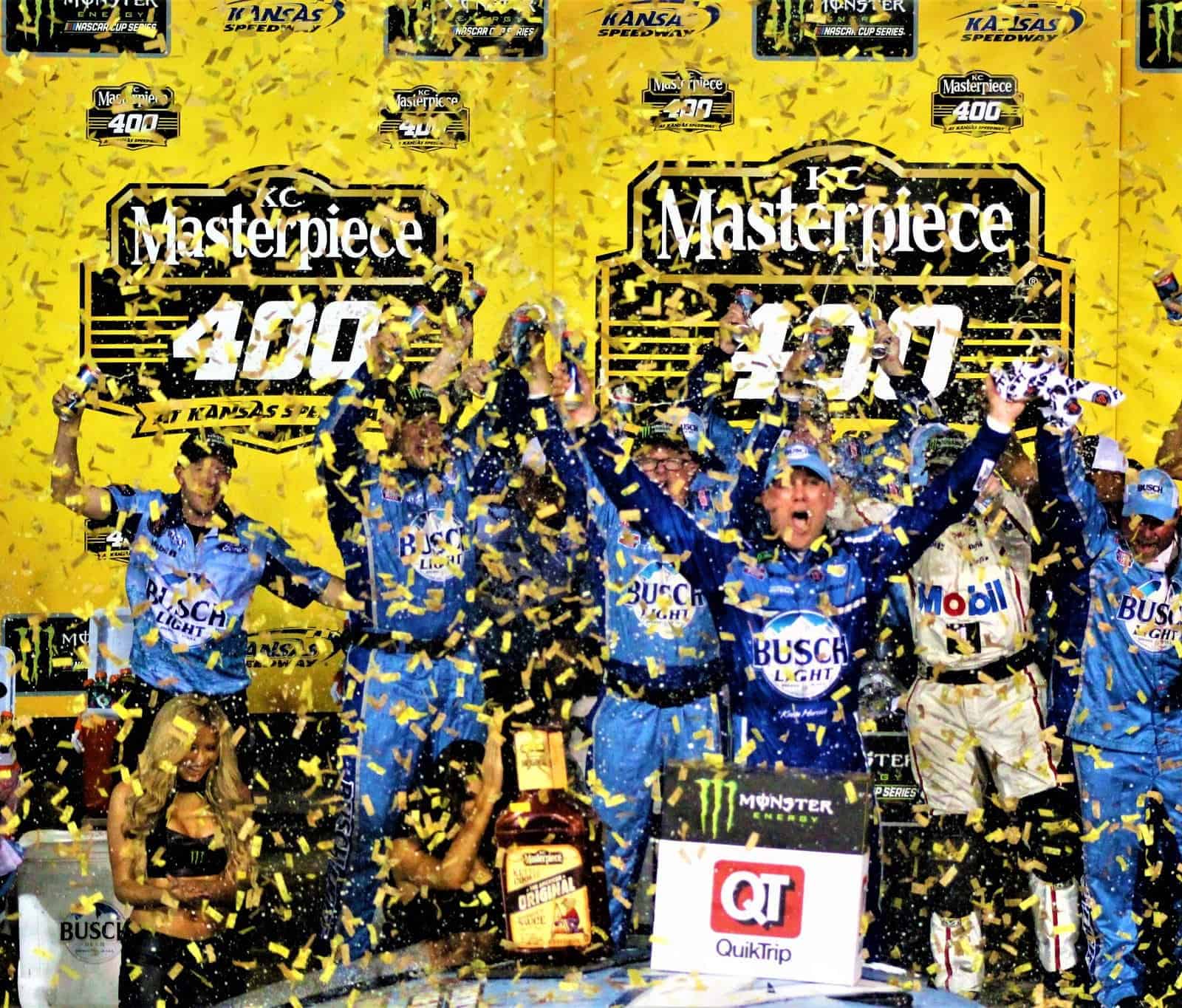 Harvick emerged victorious again when the dust settled over Saturday night’s (May 12) KC Masterpiece 400 at Kansas Speedway. The driver of the No. 4 Ford took four fresh tires under the final caution, restarted eighth and quickly worked his way through the field. He mowed down Martin Truex Jr., who had initially built a more than three-second lead, in the final nine laps, passing him heading to the white flag to take the win.

Harvick led five times for 79 laps en route to his fifth victory in 12 races. This one wasn’t easy – he finished runner-up in both stages – but both driver and team had the speed when it mattered most.

“I think for us it was a battle all weekend,” Harvick said after the race. “The coolest thing that came out of the weekend is just the grit of the race team. We just kept grinding on it and nobody complained – or I complained. I complain all the time. That’s kind of my job to complain sometimes.

“I haven’t been that excited to win a race all year,” he continued. “But when you win them like that, those are the moments that you drive the car and watch the car and work on the team. Those are the moments that you live for right there, those late-lap winning passes and coming from behind and winning on a day when you don’t feel like you had the fastest car, and that makes it a lot of fun.”

Behind them was Paul Menard, who matched his best finish of the season with a sixth-place result.

“We had a good car all weekend. We made some good adjustments coming into tonight and kept working on it all night long,” Menard said after the race. “The track changed a lot as the sun went down. Kind of saved our best for last, I guess. We had a couple cars crash in front of us. We avoided it and the further up you can restart, the more likely you are to stay up there. Clean air was everything tonight.”

With the win, Harvick ties his career high with five victories just 12 races into 2018. For this one, he started on the pole and led the first 32 laps before hitting pit road under a competition caution and relinquishing the top spot to Ryan Blaney, who held it through the end of stage one. Harvick won the race off of pit road and re-assumed the lead for 39 circuits until a round of green-flag pit stops.

Once the round of stops cycled through, Larson worked his way to the front. The No. 42 Chevrolet, who started from the rear of the field for an unapproved tire change following a qualifying spin, executed the first green-flag pass for the lead and held it all the way through the conclusion of stage two.

A blistering fast pit stop helped Larson maintain the lead during the stage break, and that’s where he stayed until a round of green-flag pit stops. The driver of the No. 42 Chevrolet cycled back to the lead when Ricky Stenhouse Jr., whose team attempted a fuel mileage strategy, pitted on lap 226.

Just 12 laps later, the fourth caution flew for contact between Daniel Suarez and Alex Bowman. Both drivers would continue but their wreck set up a frantic finish up front.

On the restart, both Blaney and Larson struggled. Falling to third and fourth, the drivers were trying to battle back up when Blaney came up and made contact. That cut a tire on the No. 12 Ford and sent him hard into the outside wall. Blaney, who took blame for the incident was forced to retire on the spot.

“Just trying to slow the No. 42 up, my fault trying to chase him up there,” he said. “By the time I got it carried around, I hit him and blew out my right front. Hard racing, just stinks that it happened.”

Larson’s rear window got caved in by the wreck, right near where other cars have been penalized for rear bracing infractions. Any penalties will be announced by NASCAR later in the week.

The field restarted and Truex, via pit strategy pulled out in front of the field just in time for all hell to break loose. William Byron, who was running inside on a brief moment of four-wide racing with Harvick, Ryan Newman and Clint Bowyer, lost control. The rookie clipped Bowyer and spun head first into the outside wall hard enough to lift the back end of the No. 24 Chevrolet off the ground. He landed on top of Newman in a fiery crash; the incident also collected Matt Kenseth, Jamie McMurray, Chris Buescher and Ty Dillon.

“Getting really tight,” he said of the spin. “Can’t fool around with the air there and a guy on the outside of me. Hard hit, thankful for everything on the car.”

All drivers were checked and released at the infield care center. After a 13 minute, 13-second red flag, racing resumed and remained green until the checkered flag flew. That gave Truex a shot at the win, older tires still launching him to the front on a restart. But the No. 78 ultimately just didn’t have the speed that allowed it to sweep both races last year.

“It just wasn’t enough,” Truex said after the race, joking at one point the No. 4 had an unfair advantage. “Good strategy call by (crew chief) Cole (Pearn) and a hell of an effort by everyone on the team. We’re missing something right now.”

In total, the race was slowed by six yellow flags, which includes the two stage breaks and a competition caution following heavy morning rains over the speedway.

In the MENCS standings, Kyle Busch remains on top by 12 points over Logano. Harvick is third, followed by Brad Keselowski. Kurt Busch rounds out the top five.

Next weekend, the Monster Energy All-Star Race joins the Camping World Truck Series at Charlotte Motor Speedway. Coverage begins with the Monster Energy Open Saturday, May 19 at 6 p.m. ET on FOX Sports 1. The race can also be heard on your local MRN affiliate and SiriusXM NASCAR Channel 90.