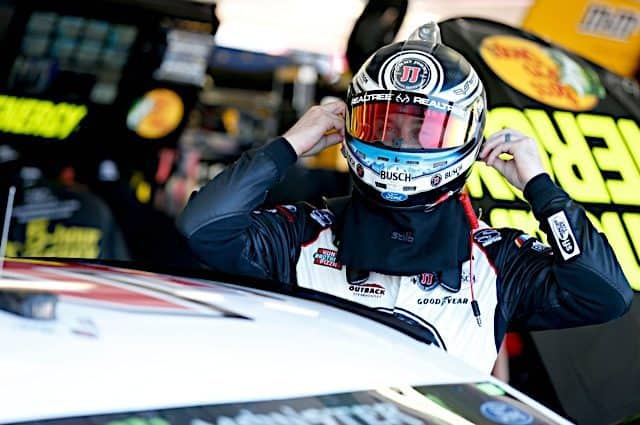 Every once in awhile, an athlete reestablishes the level of greatness in their sport. NASCAR is no exception to the rule. There were Dale Earnhardt’s next-level championships in 1987 and 1994, Bill Elliott’s 1985 Winston Million and Jeff Gordon winning 13 races in 1998. More recently, you can make the case Martin Truex Jr. was the most dominant champion (eight wins) in NASCAR’s newer, 16-team playoff format.

But Kevin Harvick is on the verge of rewriting those record books. Five wins in 12 races have the driver on pace for 15. That would set a new modern era standard, shattering the 13-wins seasons of Gordon and Richard Petty (1975).

Harvick, who has nine top-five finishes is also on pace to lead 2,460 laps. That would be the most since Gordon’s first title in 1995 (2,610 laps) while establishing a new high for NASCAR’s playoff era.

And, like Truex a year ago, the No. 4 team is racking up an impenetrable road to the championship. His 24 playoff points now are on pace to blow by the 54 his rival in the No. 78 collected in 2017. He’ll enter September a near certainty to make the Final Four at Homestead barring a 35th-35th-35th catastrophe of epic proportions.

That puts Harvick in position to relinquish some demons of a few years ago. Even during his 2014 championship season, the No. 4 had a chance to be historical but saw so many victories ruined in the name of late-race mistakes, pit problems, and mechanical failures. But this year, the breaks are headed Stewart-Haas Racing’s way; Kansas proved just the latest example.

For a time, Ryan Blaney and then Kyle Larson were cruising to Victory Lane – not Harvick. But the duo took each other out in a late-race battle that briefly paved the way for Martin Truex Jr. Once again, the No. 78 did battle with the No. 4 late in the race but, as in every mano-e-mano since Texas in November, it was Harvick and SHR who came out on top.

“We’re missing something,” Truex admitted after the race, waving the white flag of surrender (for now) to Harvick’s dominance. He even joked the No. 4 had an unfair advantage.

They don’t. It’s simply a driver and crew chief (Rodney Childers) peaking at the right time, armed with the motivation to ride this wave as long as they can.

“Now, it feels like a game,” Harvick said. “It really does, because of the fact that you want to see how many races you can win.  You want to see how many laps you can lead. A night like [Saturday night], it really shows the experience of the team because I feel like this is the kind of cars that we had in 2014, but we had a lot of parts failures.  We were all new.  We made a lot of mistakes and just didn’t really know how to deal with it like we do now, and it’s — but yeah, it’s addicting.”

Come November, it could also be record-breaking. – Tom Bowles

XFINITY Series: Ratings Down, Action Up

Despite being in its first of two consecutive off-weekends, the XFINITY Series has gotten off to a hot start to 2018.

Through the opening 10 races of the season, 10 different drivers have visited Victory Lane. Tyler Reddick kicked off the year with the closest margin of victory in NASCAR history, followed by a Kevin Harvick domination at Atlanta. Kyle Larson hit the jackpot in Vegas, while Team Penske won the next the three races with Brad Keselowski, Joey Logano, and Ryan Blaney.

It took until Bristol for the next series regular to visit the Winner’s Circle, but Ryan Preece got it done at Bristol. Christopher Bell followed that up with a win at Richmond, while Spencer Gallagher scored his first career triumph at Talladega. Justin Allgaier won the series’ most recent race at Dover. What’s unique about those four races? They were all Dash 4 Cash events, and Cup regulars weren’t allowed to compete.

Even though it’s been an action-packed season, ratings continue to decline. Each race this season has seen a drop in ratings compared to last season. Talladega, which was the Driver’s Only broadcast, earned a 1.2 rating and 1.90 million viewers on FOX, down five percent from last season.

It’s not good that the viewers are leaving, even worse that crowds for XFINITY races are spare. However, the last time there were 10 different winners in the first 10 races of the season was 2004. – Dustin Albino

Just a week after he ended the race in the garage, heartbroken from crashing following an aggressive race for the lead with two laps remaining at Dover, Noah Gragson emerged victorious after a dominant Friday at Kansas Speedway.

The driver of the No. 18 Toyota started on the pole and led five times for a race-high 128 laps en route to his second career victory but his first of the season.

WE did it! WE won last night at Kansas! I’m so thankful for @safelite @Switch @ToyotaRacing @KBMteam and everyone else who supports me! My team works so hard and it is a privilege to drive for them! Very thankful for the opportunity to race in the @NASCAR_Trucks Series! pic.twitter.com/7wf3NtLZLt

The win moved Gragson 16 points closer to Johnny Sauter for the championship lead and gave the second-year driver a good chunk of playoff points to take into the playoffs later this season. But perhaps what was more important is just how much his confidence has grown in recent weeks.

Following three successful XFINITY Series starts, Gragson now appears much more confident in himself as he gets on track and more sure of the race program itself. Kyle Busch Motorsports won the championship last season with Christopher Bell, and Gragson is making a case for his own shot to continue the organization’s legacy. – Beth Lunkenheimer

Lewis Hamilton can remember the days when he and his current Mercedes teammate, Valtteri Bottas could just dominate the race. It could be a gap of seven seconds or more, between the two, but Hamilton would be happy, and the others would wonder on how can they beat “those Mercedes cars”?

This season leading up to this weekend’s Spanish Grand Prix, Hamilton could not seem to get to grips (literally) with trying to coordinate how the tires are working on his car. It was disappointing to see his rival, Sebastian Vettel, winning many races this season.

However, this past weekend in Spain, the tables turned. Not only Hamilton did well in practice and qualifying but won the race by over 20 seconds ahead of (you guessed it) Bottas. The Ferraris were nowhere in sight, as Kimi Raikkonen had an engine issue and Vettel botched a pit stop when a virtual safety car period happened, finishing in fourth.

Speaking of safety, there is an honorable mention award in the sickest sense, that should go out to Haas F1 driver Romain Grosjean. It is either the Frenchman is worried that his teammate Kevin Magnussen is putting tension on him, or he is just beginning to crash and spin like he did back in Spa when he took out many cars on the opening lap just like he did this past week in Barcelona. In both circumstances, he is being penalized for his actions, and hopefully, Grosjean is not beginning to go back to his old tricks of making dumb mistakes while in the cockpit such as spinning on a safety car lap or trying to not think under situations that could cause problems with other drivers. This could lead to him being replaced for next season.

Next stop is Monaco, where the race is more like a lottery, with tight corners and lots of attrition. Not good for sensitive drivers, but good for Hamilton and Vettel. – Mark Gero

GERO: HAMILTON THE HERO IN SPAIN

Last weekend was a very successful time for the Porsche factory.  On Sunday, the factory-owned Manthey Racing claimed overall victory in the Zurich 24 Hours Nürburgring with their No. 912 Porsche 911 GT3 R shared by Richard Lietz, Frédéric Makowiecki, Patrick Pilet and Nick Tandy.  That was actually the slower of the two factory entries.  The No. 911 led for a good chunk of the race from the overall pole before Romain Dumas crashed out of the lead during the nighttime hours.

The race ended up being much closer than expected due to the No. 912 getting a 212-second stop and hold penalty for going too fast in a “Code 60” slow zone (Note: In lieu of full course cautions, segments of the track are neutralized in order to tend to issues.  A Code 60 means that drivers must slow to no more than 60 kilometers an hour).  The penalty gave the overall lead to Black Falcon’s No. 4 Mercedes.  In addition, the race was red-flagged for two hours due to rain and heavy fog.  After the race restarted, Makowiecki was able to get by Adam Christodoulou for the lead and pulled away for a 26.413-second victory.

Earlier in the weekend, Porsche unveiled the new 911 GT3 R that will race beginning in 2019.  Unlike the GTE version of the 911, this car will remain a traditional rear-engined racer.  However, there have been a number of aerodynamic improvements to the car.  The nose and tail have been re-designed to resemble the Porsche 911 GT3 Cup while improvements to the suspension are also in store.

In North America, the car will be eligible to race in the IMSA WeatherTech SportsCar Championship’s GT Daytona class and Pirelli World Challenge’s GT class.  The car will not be allowed to compete in SRO-sanctioned events until the beginning of the 2019 Blancpain GT Series season.

Currently, the 2019-spec 911 GT3 R will make it’s debut late this year in an unknown endurance race.  Porsche did not indicate which race that would be. – Phil Allaway

ALLAWAY: G-DRIVE PUTS ON A+ PERFORMANCE AT MONZA

For the third time in four years, Will Power won the IndyCar Grand Prix. The victory marked the 200th time a Team Penske machine took the checkered flag in Indy car racing.

Simon Pagenaud, a two-time winner of the race, was involved in a first-lap accident with Ed Carpenter Racing rookie Jordan King. Pagenaud managed to escape the gravel trap he slid into and eventually salvage a seventh-place finish, but King finished two laps down in last place.

With 30 laps to go, reigning series champion Josef Newgarden attempted to overtake Sebastien Bourdais in Turn 12, but spun, bringing out a full-course yellow. Newgarden entered the day with a 13-point lead in the standings over Alexander Rossi, but his 11th-place finish cut his advantage to a mere two points. -John Haverlin

The Frontstretch Staff is made up of a group of talented men and women spread out all over the United States and Canada. Residing in 15 states throughout the country, plus Ontario, and widely ranging in age, the staff showcases a wide variety of diverse opinions that will keep you coming back for more week in and week out.
@Frontstretch
Previous G-Drive Racing Snags 4 Hours of Monza Victory
Next The Big 6: Questions Answered After the 2018 KC Masterpiece 400