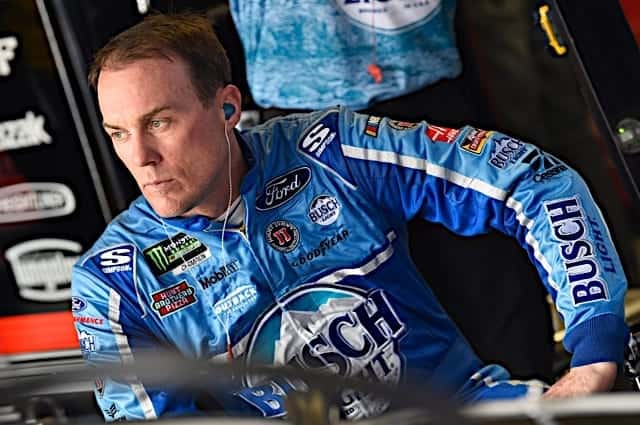 For a small team, finishing in the top 10 at Talladega Superspeedway is a great showing, but such performance is a lot more likely at a restrictor-plate track than at an intermediate, where aerodynamics rule the day and speed comes with a premium price tag.

For a struggling smaller team, a top 15 on an intermediate is a very, very good race, and David Ragan had a very, very good race on Sunday, finishing 13th for Front Row Motorsports.  His No. 38 team had a solid enough race strategy that it was able to race with the heavy hitters Saturday night, a much-needed shot in the arm for a team that has not had the finishes it hoped for over the last couple of seasons.

What… is the takeaway from the race?

We often hear that the driver no longer matters in NASCAR, that the cars are too important these days.  And to some extent, it’s true that without good equipment, the best driver can’t compete for wins very often.

But there are also times when we see just how much difference the driver makes.  Take a look at the No. 10 this year.  Aric Almirola has four top-10 finishes so far, more than half of Danica Patrick’s career total for top 10s in that same car, over five full seasons plus a handful of races.  Are the cars that much better?  Doubtful, but Almirola is.

On the other hand, Ty Dillon has struggled mightily this year and had a mediocre rookie season in cars that are vastly improved from where they were in 2016.  Dillon gets somewhat of a pass because of his inexperience, but how long can that be realistically used as a reason rather than an excuse, especially since he performed better a year ago? Germain Racing is getting better cars from Richard Childress Racing, but what difference does that make if they’re not finishing any better?

So while it’s true that when all the best drivers have equally great equipment it’s hard for anyone to get an edge on track, it’s not true that drivers don’t matter.  They do, and the right driver will get better results.

One of four drivers to start every race at Kansas Speedway, Kevin Harvick’s third win at the track ties Jeff Gordon and Jimmie Johnson for the all-time Kansas win record. Saturday night, Harvick started on the pole and led five different times for a total of 79 laps—not the most (that honor went to Kyle Larson), but more than enough.

On the final restart, Martin Truex Jr. looked to have the race well in hand, holding a .75-second lead with about five laps to go, but Harvick easily ran him down, making the winning pass before the two took the white flag.  Truex put up a spirited battle but was no match for Harvick’s Ford at the end.

When it was over, Harvick took a victory lap past the stands backward — as in, in reverse, not a Polish victory lap. Jeff Gordon commented with a chuckle, “Now he’s just showing off.” And he was.  Because he could. Again.

They say cautions breed cautions, and that was on display Saturday night. Other than the stage breaks, nary a yellow flag was in sight until just 30 laps remained, when Daniel Suarez cut a tire and tangled with Alex Bowman. Restarts provide the best opportunity for passing on a mile-and-a-half track, and after the field went back to green from that incident, Larson and Ryan Blaney got together racing for third place and brought out another caution just a few laps after the restart. For Larson, it may have decided the race, because he looked to be the only driver with a car that might have something for Harvick’s No. 4.

Again the restart featured clamoring for position, and during the scramble, rookie William Byron got loose and, because the cars were bunched up, collected six others, including Matt Kenseth, Ty Dillon, Ryan Newman, Jamie McMurray, Clint Bowyer and Chris Buescher.  Buescher was slow getting out of the No. 37, but all seven drivers were able to walk to the ambulance.

The series of cautions set up what was, for Kansas, an exciting finish between Harvick and Truex and put an exclamation point on what most have suspected the last few weeks: Harvick and the Ford camp may be the class of the field this year.

He almost did.  Truex did everything right at the end, getting a strong restart and pulling away as Harvick was left to try to run him down.  At first it looked as though Harvick would run out of time as he gained about a tenth of a second for a couple of laps, but as the tires heated up, Harvick was almost half a second faster, closing the gap in just a couple of corners.

Truex, who won eight times last year, including both Kansas starts, has one win in 2018.  Once Harvick closed the gap, Truex did everything he could to hold off Harvick’s charge for the final lap, but Harvick had the edge and he made it count.  Truex hasn’t quite displayed the form he did last season, while Kyle Busch leads the Toyota camp—and driver point standings—with three wins so far in 2018. Truex’s seven top-five runs match Busch’s season total, and he’s safely in the playoffs barring injury, so it’s hardly a bad start for the defending series champion.

How… did Matt Kenseth do in his return?

Kenseth did exactly what he set out to do: diagnose some of the issues with the No. 6 cars that could help the Roush Fenway Racing program improve.  Because he didn’t turn a lap in qualifying, Kenseth had to come from 35th, and he lost a lap early, got a free pass and lost a lap again.  But the positive: he ran with — and bettered — Johnson at one point while battling for the free pass position. Kenseth showed that as a driver, he hasn’t lost a step.

He also showed that the No. 6 (and RFR in general) have some work to do to become competitive, but maybe it’s not as bad as it looked.  It looked as though Kenseth has a car equal to Johnson’s, which while maybe not what either of them want to hear is a positive for RFR (though maybe not so much for Trevor Bayne).  It’s easy to rank them below Hendrick Motorsports on the Cup ladder even though HMS is having what is, for its organization, a terrible season, but perhaps that isn’t the case.  And if the Roush camp is equal to the Hendrick camp, maybe a turnaround is closer than it looked. Another case of who’s behind the wheel telling the real story.

That’s more an indictment on Johnson. Kenseth will finish events where Bayne finished them. If you’re holding your breath expecting the 6 to dramatically improve you’ll be long gone and Hell will be a lot cooler.

I thought Chip’s reaction to Ryan’s miscue was priceless and I wouldn’t want to be Ryan in Monday’s meeting. There’s a difference between youthful exuberance and youthful stupidity. But that’s what you get with young drivers. Experienced drivers don’t make the mistakes that kids do because they’ve already made them and learned from them.

Ryan Blaney drives over his head and over his ability. He reads too many of his press clippings. He is no better than his dad and proves it every week with another stupid mistake.

Comparing the cars that Amirola has this year with the crap slow cars SHR gave Danica for most of last year is BULL. In case you have not noticed, all 4 SHR cars are much faster than most of the other cars from even the top teams and those other teams are even saying so. Get real and get off the anti-Patrick theme once and for all… by the way, are you ignoring the FACT that Danica got taken out of at least 10 races of the 30+ last year by the idiots who wrecked around her… none of those DNF were her fault… as a matter of fact, can you think of one time Danica caused a big wreck last year? So, getting wrecked out of around 30% of the races you are in, sometimes when you are running in the top 10, makes any comparison with Amirola this year pure smear bull crap by you.

anytime you see a team “magically” pick up speed compared to its peers theres something going on. All the way back to Harry Gant and the cambered rear, or Hendrick with the radiators and on and on. the others will catch on sooner or later.

Bill B
Reply to  James

Wow. Keep making excuses for Danica’s lack of success.
So why would SHR give her crap cars? How does that benefit them? Why would you purposely handicap your own team and lessen the money you get for good finishes and sponsor opportunities?
I’d also wager that most of the time that Danica got caught up in wrecks she wasn’t running in the top 10 (I know there were a couple of times that happened but it was the exception not the rule). When you run at the back with the dregs you get caught up in more wrecks. Doesn’t matter if you are Jimmie Johnson or Danica Patrick.
You can make up all the excuses you want but you can’t ignore the numbers.

And Amy writes another amateur-level column. Priceless! I think she confuses her beloved horses with automobiles. She hasn’t written anything remotely relevant to auto racing in her entire career.

BTW, Amy, I knew Justify would win when I saw him go to the front on a sloppy track. Mud favors speed. And I like favorites. Who gets your shout-out of the Derby? The 15th place horse?

And I knew Harvick would win when his lap times were half a second faster than Truex’s. These things are not rocket science. Just what qualifies you to write this tripe?