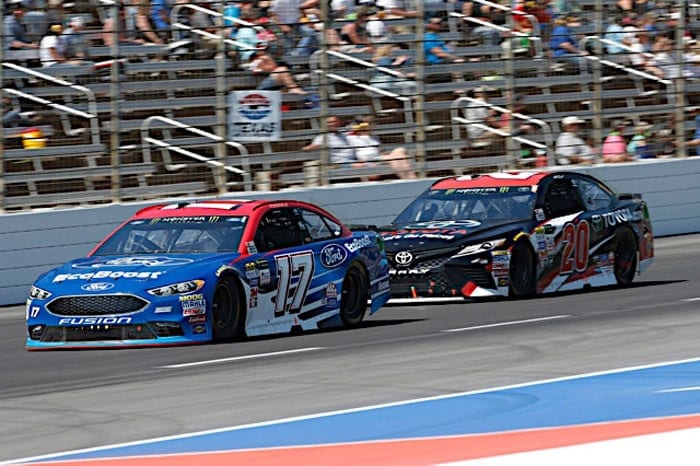 Matt Kenseth’s first race back in the Monster Energy NASCAR Cup Series did not go quite as planned, despite the fanfare that surrounded the veteran racer being reunited with his new old team, Roush Fenway Racing.

Instead, the No. 6 crew struggled with the car all night at Kansas Speedway on Saturday (May 12).  Kenseth was lapped early and got swept into a big crash in the closing laps that wiped out a few contenders.  All of this occurred after the No. 6 car had difficulty getting through pre-qualifying inspection on Friday, preventing Kenseth from even attempting a qualifying run.

Ricky Stenhouse Jr., Kenseth’s one-time replacement and now teammate at RFR, fared a bit better.  Stenhouse maintained position on the lead lap for most of the race and led 10 circuits during a green flag pit stop cycle.  Although he drew the ire of Chase Elliott after the race, Stenhouse avoided major trouble and finished 11th, which was better than he ran most of the night.

If RFR’s performance at Kansas is any indication, there is a lot of work that needs to be done to bring the team back to its former glory.  The good news is that having Kenseth back in the fold should yield improvement in the organization’s cars.

However, the person who stands to benefit the most from Kenseth’s help is Stenhouse himself.

In all the excitement surrounding Kenseth’s return, new sponsors and the long-term future of Trevor Bayne, Stenhouse has been the forgotten man at Roush Fenway Racing.  But what happens at RFR over the rest of the 2018 MENCS season could have major implications for Stenhouse’s future.

In the short term, Stenhouse finds himself in a tight battle to make this year’s playoffs.  With drivers like Kevin Harvick and Kyle Busch racking up wins early in the season, it stands to reason that the playoff grid might have more drivers than usual who qualify by points position.  Following Kansas, Stenhouse is the first driver on the outside looking in.  He is only one point below the cut line and behind the final qualifying playoffs spot, which happens to be held by Elliott.  Stenhouse is also within striking distance of playoffs positions held by Alex Bowman, Erik Jones and Jimmie Johnson.

Stenhouse could certainly win his way into the playoffs like he did last year.  His best bets for a victory would be at Daytona International Speedway in July, where he won in 2017, or at Bristol Motor Speedway.  However, both of those venues feature styles of racing that place a lot of variables beyond a driver’s control.  Stenhouse has a better chance than most drivers of winning at Daytona or Bristol, but only if he avoids all the chaos that is sure to erupt earlier in those races.

Better performance on intermediate tracks would be a safer road to reaching the playoffs.  If Kenseth’s input helps RFR build better handling cars, then Stenhouse should be able to challenge for more top-10 finishes.  Remember that one of Kenseth’s greatest strengths is his hands-on approach to team building and his expertise in chassis setups.  He can provide the veteran leadership that Roush has been lacking for years, and his insight will give Stenhouse an advantage in reaching the playoffs.

It would certainly make an interesting story if Stenhouse displaced either Bowman or William Byron from the postseason after Hendrick Motorsports made such a commitment to youth over experience.  There is also the possibility that Kenseth could help Stenhouse overtake Jones, who occupies Kenseth’s old ride at Joe Gibbs Racing.  Either way, Kenseth’s presence at RFR raises Stenhouse’s value as a playoffs contender, even if a lot of work remains to be done.

Stenhouse stands to benefit from Kenseth’s help over the long term as well.  When he arrived in the Cup Series as a full-time racer in 2013, many expected Stenhouse to emerge as a star.  But the No. 17 team slipped from the ranks of weekly contenders, and Stenhouse endured over four seasons’ worth of up-and-down performances before scoring his first career win last year.  Along the way, Roush Fenway Racing lost Carl Edwards, Greg Biffle, the sponsors and resources necessary for supporting a third team and its prowess on NASCAR’s fast, high-horsepower tracks.

In his career, Stenhouse has averaged one top-10 finish every seven races.  While there are plenty of drivers who never reached that mark, it is undoubtedly below the expectations that Stenhouse set for himself and the expectations owner Jack Roush had for his team.  The last few seasons have felt as if Roush Fenway Racing has been stuck in motorsports purgatory, waiting for Stenhouse or Bayne to emerge as contenders to take the team back to the ranks of NASCAR’s elite organizations.  But the team’s performance has only declined or stabilized for short periods, leaving fans to wonder if the problems at RFR rest with the drivers, the cars or some combination of both.

Kenseth’s performance will eventually provide the organization, and fans, with answers.  Stenhouse’s current contract with RFR runs at least through 2019, which gives him the rest of this year and all of next year to evaluate any improvements that Kenseth helps the team make.  If Stenhouse becomes a contender, it will give him more leverage with RFR and increase his own value as an important part of the team.

Better performance could also make Stenhouse more attractive to other teams.  Before moving to Stewart-Haas Racing this year, Aric Almirola had earned 32 top 10s in 244 starts.  His rate of finishing in the top 10 was similar to Stenhouse’s, and most of those starts came in Richard Petty Motorsports equipment when the team had a technical alliance with Roush Fenway.  Almirola has not been busting down the door and challenging for wins in 2018 for the most part, but he has earned five top 10s in just 12 starts with his new team.  If Kenseth makes it clear that RFR’s cars have been a major problem, other team owners might see Stenhouse as someone who could be a good fit in their own operations.

The next year or two could be pivotal for Stenhouse.  While he could be credited with starting or at least helping to start the current NASCAR youth movement, Stenhouse turned 30 last year, and his level of experience in the Cup Series has reached the point where he blurs the line between newcomer and veteran.  If Stenhouse is going to emerge as a star, it will have to happen soon, and RFR finally has someone who can facilitate that transformation.  The final chapter of Kenseth’s career could set Stenhouse up for a whole new story.

As Stenhouse has improved, RFR has declined. Like many young drivers, Stenhouse was a little too aggressive in his first few years in Cup. His rookie year in 2013 was uneventful, and his sophomore season was worse, but he has gotten better over the last couple of years. If Kenseth can help RFR, it will reveal the talent that Stenhouse has had all along. He may never set the racing world on fire, but he may become a solid, dependable driver who can deliver a couple of wins most seasons if when given a competitive car.

However, I question Matt Kenseth’s dedication to RFR over multiple seasons.

As long as Jack Rousch is in charge, RFR will never be a contender. He obviously cannot change or keep up with the times and is not willing to hire the personnel to do so. Would love to know what the untold story about driving for him is. Clearly the drivers were never all that happy.

Neither Stenhouse or Kenseth can save RFR. Kenseth is over the hill and except for some lucky plate races, Stenhouse will never even SEE the hill. Roush is a jerk who deserves second-tier drivers.