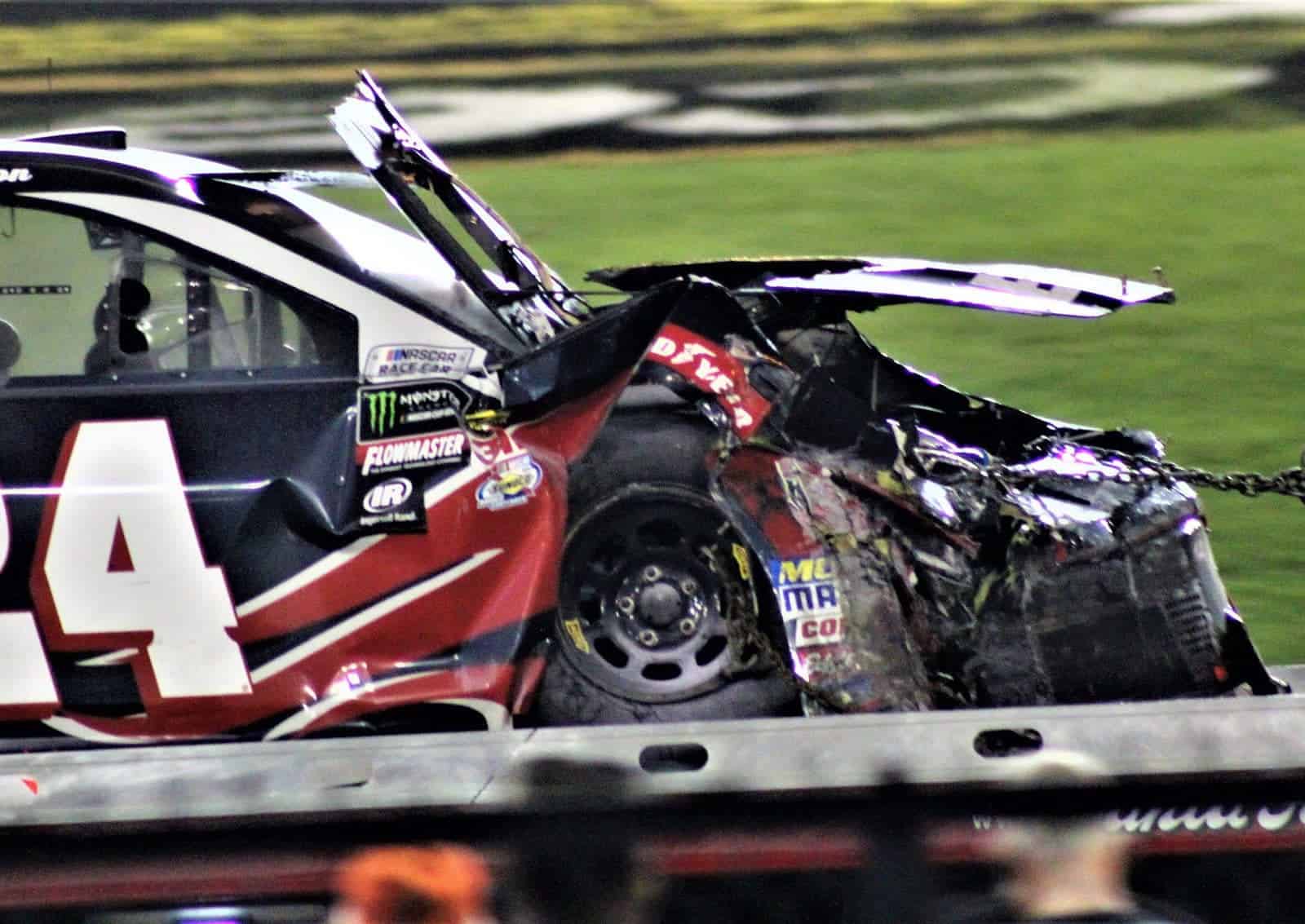 The Monster Energy NASCAR Cup Series KC Masterpiece 400 was relatively uneventful most of the night. But after 237 laps with no unplanned cautions, the final 30 laps gave us three. The most serious came on lap 249, when William Byron triggered a vicious crash that resulted in a 13-minute, 13-second red flag.

The driver of the No. 24 Chevrolet had a brief moment of four-wide racing with Kevin Harvick, Ryan Newman and Clint Bowyer. But the 20-year-old, running his first MENCS race at Kansas just couldn’t hang on. He got loose, clipped Bowyer and spun head first into the outside wall hard enough to lift the back end of the No. 24 Chevrolet off the ground. The contact tore the front end to shreds, sending him airborne and led to a fiery crash. Byron briefly sat on top of Newman, the front end mangled so badly observers were relieved to see him climb out under his own power.

“That one hurt really bad, but, I’m fine,” Byron said after emerging from the infield care center. “We took two tires there, couldn’t get it turned on the bottom and then got sucked around at the last minute.

“I think overall, we were trying to kind of push some things there and it just didn’t work out. We’re going to wherever is next and that was definitely the hardest hit I’ve been in. But, I’m thankful to be walking, so that’s good.”

Bowyer was able to continue, but the other six were out on the spot, finishing 30th or worse. All drivers were treated and released from the infield care center.

“We were just an innocent bystander, really,” said Newman of his view on the incident. “They crashed kind of underneath me, in front of me and just got all wadded up. I mean, I had no place to go. It’s just unfortunate, kind of a ho-hum race I guess you could say for so long. Then, to get 14 laps from the end and tear up a bunch of cars like that just kind of sucks.”

Meanwhile, Kenseth’s return to Cup racing had already been a struggle. He ran outside the top 20 all weekend with Roush Fenway Racing’s No. 6 before being collected in the melee.

“I don’t have any idea what happened with the wreck,” Kenseth explained. “I just saw everybody wrecking and the track was kind of blocked, so I tried to get down toward the grass. This grass is not the new friendly grass with the rain and all. It just kind of dug in and then I just hit the car in front of me.”

William Byron’s head on crash into the wall looks a lot harder than Dale Sr. at Daytona. Why could Byron jump out of his car with no apparent problems? Has every thing changed that much?