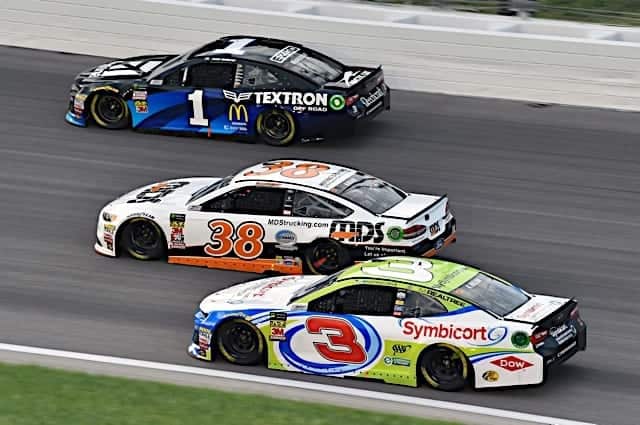 Kansas Speedway seems to have a knack for having some savage accidents in recent years: Erik Jones‘ near-flip last fall, Aric Almirola, Clint Bowyer in 2015, Brian Vickers in 2013, etc.

Saturday night saw another hard one with William Byron landing on top of Ryan Newman, a wreck that swallowed a half-dozen cars in the closing laps of the KC Masterpiece 400.

Who benefited from another scary Kansas crash? The underdogs. A few had good days going, but it wasn’t until six top-20 runners took it to the garage where they gained some valuable positions.

Similar to Talladega or Texas in April, the benefit of being near the rear of the field shows its face when chaos sparks mid-pack. And though the race had no on-track incidents in the opening 235 laps (with all 38 cars running at the time) the closing 30 laps saw 11 cars suffer damage.

In a schedule that has many 1.5-milers (a third of the season), it’s actually tough to find many consecutive weekends for the layout. In fact, with Charlotte’s All-Star Race and Coca-Cola 600 the next two weekends, this is the second and final back-to-back races for mile-and-a-half tracks after Atlanta and Las Vegas early in the season.

This is important for underdogs, whose struggles are often shown no better than tracks of this length. However, outside the rough-and-tough Atlanta, the Frontstretch “Underdog of the Race” has finished 15th or better at the 1.5-mile tracks.

And it continued Saturday at Kansas.

David Ragan, in regards to his fellow underdog competitors, has stepped up his game in recent weeks. For the third time in the last five races, Ragan earned the Frontstretch “Underdog of the Race”, this time, finishing 13th at Kansas.

Ragan spent nearly the whole night in the top 20, running 20th on average and bumping to 19th at halfway. And when Blaney brought out the caution flag with 18 to go, Ragan found the free pass. And as mentioned earlier, the big wreck pushed him even further up the running order for the final restart.

At the end of the day, 13th and a lead-lap finish are valuable to Ragan and Front Row Motorsports. The result not only pushes the No. 38 to 25th in points, but rather outlines a deeper improvement from the organization.

Ragan’s top-15 is another FRM best. Best finish at Kansas in team history.

The run was their third top-20 finish in the last five races. In the prior seven races, Ragan had none. And with teammate Michael McDowell finishing 20th, Saturday at Kansas was Front Row’s first double-top-20 day since Daytona last July and first at a non-plate track since Charlotte in the fall of 2016.

But there were others who found positivity on Saturday. Outside Ragan and McDowell’s top 20s, AJ Allmendinger also jumped to 16th at the end, as the first car off the lead lap. The JTG Daugherty Racing No. 47 made a gain from halfway, advancing from 23rd to 16th.

Kasey Kahne and Matt DiBenedetto just missed the top 20 in 21st and 22nd, decent days any way you can look at it.

Every race will have quite a few names at the back-end of the field. Whether it’s raw speed, strategy or bad luck, it’s just a natural part of every Monster Energy NASCAR Cup Series race.

Darrell Wallace Jr. was perhaps on the bad luck portion on Saturday, suffering a flat right-rear tire under green with five laps to go in Stage 1. This required some Class-A driving to keep his No. 43 Chevrolet from wrecking down the frontstretch before slowing to pit.

Despite the late attrition, Wallace only managed 23rd.

Corey Lajoie had a good day, finishing for only the second time in 2018 in five starts. His 24th-place finish was also his best Cup result since his career-best 11th at Daytona last July.

Landon Cassill gave another top 25 for StarCom Racing in 25th. The result was his third in six starts this year.

Ross Chastain scored 26th, one spot ahead of Premium Motorsports teammate Reed Sorenson, who saw his best finish of the year in 27th.

Gray Gaulding finished where he started in 29th followed by Timmy Hill in 32nd. Chris Buescher and Ty Dillon were caught up in the late big wreck, finishing 34th and 38th, while BJ McLeod finished 35th in his first Cup start of 2018.

Stewart Friesen had a good time in Friday’s Camping World Truck Series race at Kansas. Not only did his No. 52 team lead the race for six laps, but Friesen was up front battling Kyle Busch and Noah Gragson for the lead for much of the night. A third-place finish was his best of the year.

John Hunter Nemechek rallied from 14th to finish fourth on Friday. Both John Hunter and father Joe Nemechek combine for four top 10s in nine starts this year, including a win at Martinsville.

Fun race tonight. Proud of the effort and good cars the @Team_FRM #38 crew are bringing to the track.

A Sunday off sure does sound good about now!

Your late night reminder to keep on voting for me please! Helps our small team so much. https://t.co/GMkc0Umpqw

So this just happened…

I don’t think Friesen should be counted as an underdog anymore. At the start of 2017 when they were with Tommy Baldwin Racing, sure. But when they became a GMS satellite last summer they started running consistently better. Over the offseason, Sauter referred to the 52 as a fifth GMS truck. It’s GMS equipment, he should be running well.