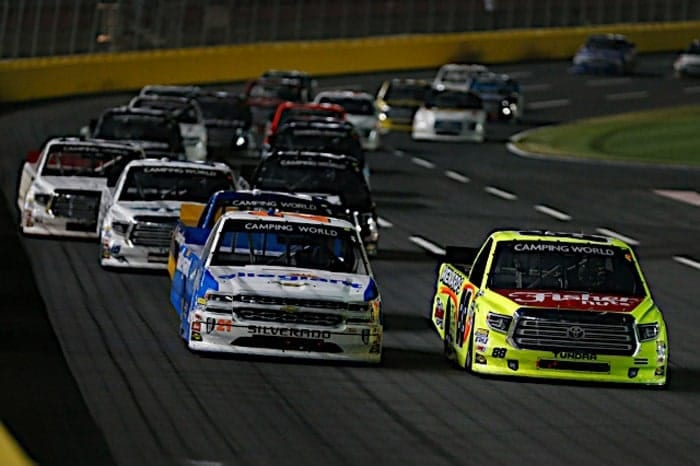 For Friday night’s Camping World Truck Series North Carolina Education Lottery 200, there are currently 38 trucks entered.  As a result, there will be six teams that will be forced to retreat without racing.

The biggest change of the week is that Todd Gilliland is now the full-time driver of the No. 4 for Kyle Busch Motorsports.  Tuesday (May 15) is his 18th birthday.  As a result, he is now eligible to race on every track that the Camping World Truck Series visits.  Kyle Busch, who drove the No. 4 last weekend at Kansas, will slide over to the No. 51.  Brandon Jones, who drove the No. 51 at Kansas, will drive the part-time No. 46 and will have to qualify on speed.

DGR-CROSLEY will debut their second truck, the No. 17, this weekend.  Chris Eggleston was originally currently entered as the driver.  However, the weather is iffy for Friday, so the team swapped Eggleston into the No. 54 (while entered driver/co-owner Bo LeMastus moves to the No. 17) to guarantee his spot in the field.  Eggleston has six career starts in the Camping World Truck Series with a best career finish of 11th at Martinsville in his series debut back in 2010.  Friday will be his first Truck start since 2014.

In addition, some part-time teams return as well.  Henderson Motorsports is back with their Chevrolet for Parker Kligerman.  Ricky Benton Racing is back with Timothy Peters, while JJL Motorsports returns with Jesse Little after their heartbreak at Dover.

The only team entered without a known driver at the moment is TJL Motorsports with their No. 1 Chevrolet.  The No. 1 team, along with Beaver Motorsports’ No. 50 for Jamie Mosley were not on the initial entry list.