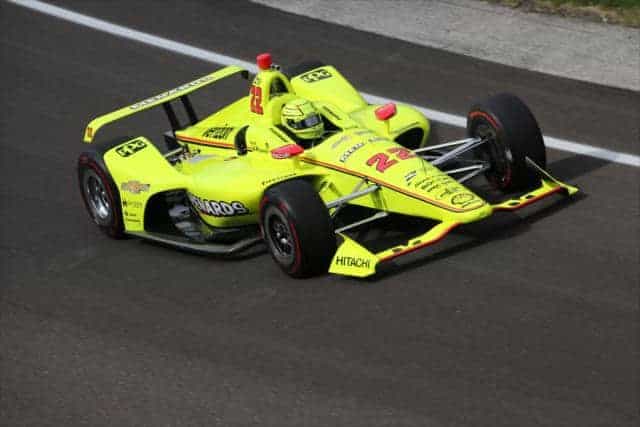 The first practices for next Sunday’s Indianapolis 500 were dominated by one organization: Team Penske. Both ends of the Indy 500 spectrum were represented here: a full-time driver seeking to redeem himself after an awful start and a part-time legend who’s seeking to make racing history.

“The (No.) 22 Menards car is looking really, really fast,” said Pagenaud. “It was a very productive day, so, yeah, (I) felt pretty happy. We obviously are still learning a lot about the aerodynamics of the car. It’s quite different to what we had the past few years. There’s still a lot to learn for everybody, I believe, but we’re on the right track.”

A 225.787 mph lap launched Pagenaud ahead during the first session while 224.665 mph put Castroneves on top during the second. The 225.787 mph lap kept Pagenaud leading the overall chart over 35 drivers who turned at least one lap during opening practices.

In between the two sessions Zachary Claman DeMelo, announced as the replacement for the injured Pietro Fittipaldi early Tuesday, was able to complete his Indy 500 rookie orientation. James Davison, Oriol Servia and Stefan Wilson were also able to complete their refresher programs.

The third practice of the week is slated for Wednesday (May 16) beginning at 11 a.m. ET. with a live stream available on RaceControl.IndyCar.com, youtube.com/indycar and the INDYCAR Mobile App.

Qualifying to determine the 33-car field takes place on Saturday and Sunday with ABC broadcasting from 4-6 p.m. ET.