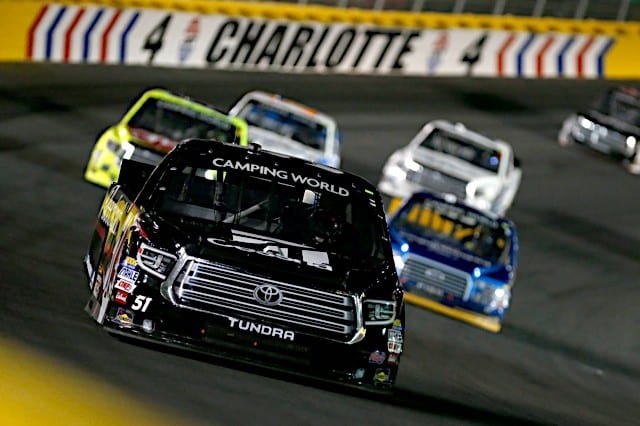 The Camping World Truck Series takes to the track this Friday night, May 18, for its annual dust-up at Charlotte Motor Speedway.  Here’s give drivers to keep an eye on.

Gilliland signed on to pilot the No. 4 Toyota for Kyle Busch Motorsports full-time for the 2018 season but there was just one problem: he was only 17 when the year began.  That’s no longer an issue since he turned 18 on Tuesday and beginning with Charlotte this weekend, Gilliland can now compete in the remainder of the schedule.

“There is a lot of things that are challenging that the 1.5-mile tracks that make this racing really tough,” KBM owner Kyle Busch said when asked about Gilliland’s move to full-time competition after the Kansas race. “But the closer you are to the front, the better the truck is, the better chance you have of being able to perform and outshine the competition.

“Todd is at every one of our meetings and is in the shop all of the time. And he’s taking it all in and listening up and writing stuff down. Hopefully, it’s a seamless transition for him to the get in the truck full-time.”

While there are likely to be challenges facing the rookie, just the extra seat time alone should translate into better performance. That’s not to say he’s going to come out at Charlotte and win the race. While KBM equipment is certainly capable of it, the transition to a longer track behind the wheel of a truck could present challenges for Gilliland as he gets acclimated. But he’s certainly worth watching, especially given the level of talent he’s shown in pretty much anything else he’s raced throughout his short career.

If you weren’t impressed by Stewart Friesen’s run at Kansas, I’d question whether you’re really into racing. Sure, the driver of the No. 52 is in a technical alliance with GMS Racing, which has seriously influenced his on-track performance since it began, but when you have a single-truck team stepping up to compete regularly for top fives and top 10s, it’s time to take notice.

Friesen led laps at Kansas and was a legitimate threat for the win, and I’m left wondering if the shifter knob hadn’t broken off how the race would have turned out. Late in the race, Friesen was leading under caution when the knob fell off, and the distraction of ensuring it didn’t end up under his feet in a bad place translated into failing to maintain caution speed, which dropped him outside the top five. On the following restart, he jumped to third, which is where he ultimately ended up when the checkered flag flew.

The one thing to watch will be how Friesen and Busch react around each other come Friday. In the closing laps last weekend at Kansas, the two made contact in what ultimately boiled down to hard racing for position.

But Busch wasn’t at all amused, especially since he believed he could have beat Gragson if not for the contact.

While it’s likely to amount to nothing this week, it will be interesting to see if Busch races Friesen a little differently and is maybe a little less forgiving than he might have previously. But when it comes to Victory Lane, it’s easy to say it’s a matter of when, not if, Friesen finds his way there.

This one may come as a surprise to many reading it, however, the driver of the No. 2 Chevrolet has shown marked improvement this season. Last year, in 23 races behind the wheel of the No. 13 ThorSport Toyota, Coughlin scored just three top 10s and one top five, including a career-best finish of third at ISM Raceway in November.

Fast forward to this season when the 22-year-old joined GMS Racing, and in just six starts he’s already matched his top-10 count of three, following a seventh-place finish at Kansas. Coughlin started second, his career-best qualifying effort but quickly dropped back after the green flag flew as he struggled with a tight truck, though he remained inside the top 10 for most of the race before settling into seventh when the checkered flag flew.

But the interesting thing is that he could have done more. Had there not been an extended green-flag run to end the race, Coughlin, in all likelihood, would have been able to work his way inside the top five.

“Tonight’s race at Kansas (Speedway) was really exciting,” Coughlin explained. “We are definitely knocking on the door of a top-five finish and a win for both JEGS and GMS Racing. It was great being able to start up front, I just wish we could have finished up there as well. We gained a lot of insight as a team and are excited to head to Charlotte next week with momentum.”

And that momentum is exactly what the No. 2 team brings with it as Coughlin continues what is already shaping up to be a career-best season. At this point, he sits outside of a playoff position, but if he can continue with the momentum and string together more top 10s, along with top fives, Coughlin could potentially even grab his first playoff berth.

Recently, Gragson got the chance to make three NASCAR XFINITY Series starts behind the wheel of the No. 18 for Joe Gibbs Racing at Richmond, Talladega, and Dover, and he didn’t disappoint. He nearly won at Richmond after participating in an intense battle with JGR teammate Christopher Bell, who ultimately won the race. At Talladega, he survived the carnage and walked away fourth before ending his short tenure with a seventh-place result at Dover.

But perhaps what was more important than his actual finishes is what his success in that trio of races did for his confidence.

At Dover, Gragson had a shot at the victory and went toe to toe with eventual winner Johnny Sauter. The problem is that it ended badly for the driver of the No. 18 Toyota, who crashed hard into the outside wall and walked away dejected and disappointed.

Fast forward to Kansas and Gragson scored his second straight pole, something that shouldn’t be much of a surprise for any driver running for Kyle Busch Motorsports. What’s more, though, is that he backed that fast lap in qualifying up with a dominant victory. He led five times for a race-high 128 laps, winning both stages, en route to his second career victory.

Now, with a win under his belt and a playoff berth more than likely secured, Gragson can take some of the pressure off of himself in the coming weeks. And given KBM’s overall success on mile-and-a-half tracks in recent years, that makes the No. 18 team and automatic in the conversation about potential winners Friday night at Charlotte.

“My mile-and-a-half program last year was, my performance was very low and that’s just coming from short track racing and moving up to these mile-and-a-half tracks and not having the experience racing these tracks,” Gragson said following his Kansas win. “This year it’s different coming into these races. I know what I need to do, I know what my Toyota Tundra needs to feel like in practice to be able to be good during the race and how my Toyota Tundra is going to handle behind guys. I’ve learned that air and can really execute now. It’s all about gaining that knowledge of just learning from all my mistakes last year and trying to capitalize on that this year.”

When the Kyle Busch Motorsports owner is entered, it’s hard to leave his name out of the conversation, and that’s the case once again this weekend. This time, Busch will drive the No. 51 Toyota, but for those of you who don’t enjoy his presence in the series, remember he led just one lap last weekend at Kansas Speedway en route to a runner-up finish. But considering his next victory will put him in a tie with Ron Hornaday Jr. for most Truck Series wins, Busch has to be a part of the conversation in at least a small capacity.

If it weren’t for the money and sponsors Kyle Busch brings to the Truck Series, there would be no Noah Gragson or Todd Gilliland to talk about. For that matter, there would be no Erik Jones, Bubba Wallace, William Byron or Christopher Bell to talk about as they move up through the ranks. Give credit where it is due. Brad K. bailed this year. If Busch were to do the same, it’s doubtful the Truck Series would even continue to exist beyond a year or two.

And the Truck race is the only real race NASCAR is running this weekend. That alone makes it the highlight of the upcoming off weekend for Cup and NXS.