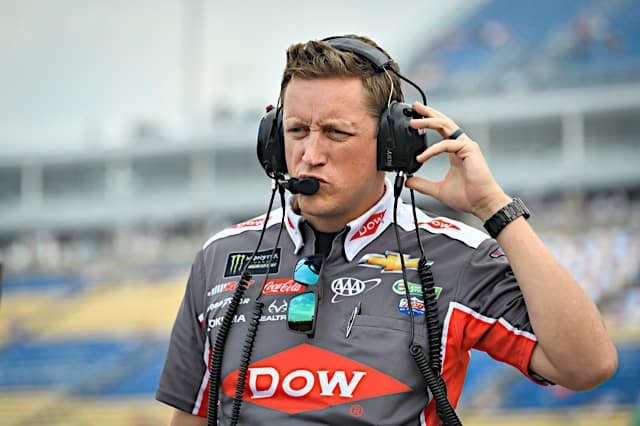 This weekend is a reward, or at least that is what it is supposed to be. Drivers and teams who have won a Monster Energy NASCAR Cup Series race since 2017, along with winners of the All-Star Race in the last 10 years get to showcase their talents in front of many of the people who work day-in and day-out to put these cars on the track but don’t travel with the teams.

While it is a non-points event that used to offer teams an opportunity to test for the ensuing Coca-Cola 600, the rules package for this weekend is completely different from anything they ever run in the Cup Series, so teams are having to spend a lot of time putting a setup together to accommodate restrictor plates, high drag and low downforce.

As Justin Alexander and the No. 3 team, driven by Austin Dillon, prepare for this weekend, they will rely heavily on computer simulation and wind tunnel results. The team has been spending extensive time in the wind tunnel with the new Chevrolet Camaro body, so much of that work has allowed them to put solid baselines into their simulators in anticipation of this weekend.

Alexander is uncertain what the tires are going to do this weekend, but he is going to have the luxury of pitting when he wants, not on demand based on rules.

He discusses that — plus other wildcards facing teams — in this week’s Tech Talk.

Mike Neff – Out front at Kansas Speedway last weekend, it felt like the first two or three cars really couldn’t do anything until Kevin Harvick at the end. Was aero that critical out there?

Justin Alexander – Clean air is really important everywhere we go. … The No. 4 car and some of the Fords have been really dominant lately. Those guys, especially when they get out in clean air, they can just go.

There is another group of guys there that are all pretty equal. We’re back there and fighting with those guys. There was some good racing, especially at Kansas.

There are different lines with guys running up high by the wall and guys running down by the bottom. It was really fun. The track changed at night and got a bit looser and threw some guys for a bit of a loop. Some guys were mishandling a little bit. It was kind of a crazy night with trying to keep a handle on the cars. I heard most everybody screaming on the radio.

Alexander – I don’t know that it was necessarily a tire thing or it could have been a humidity thing — relative humidity and the way it acts on the downforce of the car and some things like that going on. I’m not exactly sure what made them free up vs. tighten up, or why we free up sometimes at night and other times we tighten up at night. We definitely got a lot freer as the night went along. We had to tighten up a lot, and everyone I was scanning had to tighten up a lot.

Neff – With this weekend’s rules package, are you rolling in there with a typical setup, or is this something experimental to find speed for the 600 or just even for this package?

Alexander – This All-Star [Race] package is completely different from anything that we’ve run this year or plan to run the remainder of the year. Setups are definitely going to be a little different, but there is probably not a lot that is going to carry over to the 600.

Typically, we usually run the same package for the All-Star Race that we run for the 600. You typically go in there with an experimental setup or an experimental body or something different that you can learn from.

This year we have a crazy rules package that they’ve thrown at us. It is high-drag, high-downforce, [has] restrictor plates. It is going to be a completely different race than you’ve ever seen at a mile-and-a-half racetrack. I’m not even sure what to expect, honestly.

Neff – Do you have to focus on a beefier brake package than you normally have, assuming that you are going to want to trail brake a lot so that you aren’t lifting off of the gas and killing your momentum?

Alexander – No. For the All-Star Race, and typically with a package like this speedway package, you actually run smaller brakes. Even though you do trail brake, that doesn’t require a lot of brake.

What you do need a ton of brake for in the All-Star Race particularly is qualifying. They have that different qualifying format for All-Star week. We come to pit road as hard as we can with no pit road speed. Those guys are going to be going from 160 to zero.

Honestly, in the All-Star Race you just need the brakes to get on pit road during qualifying. Outside of that, especially with this rules package, you can actually use a much smaller brake.

Neff – So you really don’t think you’re going to lift much at all during this race?

It is going to be who can stay in the throttle the longest so handling will come into play. I am pretty sure, if you are out front, you can probably run wide open, no problem. However, if you’re in the back or behind a couple of cars, you’re going to have to lift.

It is really going to be who can find that balance. Just like at a speedway, you’re trying to take as much drag out of the car while maintaining as much downforce as possible so that you don’t have to lift.

Neff – Charlotte is one of the last tracks repaved with polymer that does not seem to age very quickly. Is NASCAR looking at anything different with tires this year? It used experimental tires during the All-Star Race last year.

Alexander – As far as I know, the tire that we are going to run will be the Atlanta [Motor Speedway] new left-side tire. The right-side tire is the same that we raced their last year. I believe it is the option tire for the All-Star Race last year that we’re going to run this year.

I believe they have essentially just brought a little softer tire, something that wears a little more and will hopefully fall off a little more, just to make the racing a little better and all of that jazz.

Alexander – It depends. There is no mandatory pit stop this year; you can pit whenever you want. You don’t have to take tires if you don’t want to. You can do whatever you want, because there are no rules on pitting.

I think it will depend with this new package and how it plays out. We’ll have to see if tires are that big of a deal. We may find that tires don’t mean much and you just need track position, kind of like speedway racing. We may find that tires mean a whole lot, and man, if you have tires on you can hold it wide open and kill guys that have to lift a little bit.

I think that will be touch and go. We’ll see how the weekend goes as we practice and start the race. As always, track position is always king, whether you have tires or even on old tires. A race that pays that much money with 10 laps in front of you, you’re going to probably focus on track position.

Neff – How do you go about building a simulation for a package that has never been run in the Cup Series before?

Alexander – We have sent this package to the wind tunnel. We have some good numbers on what we know it is going to do downforce-wise and drag-wise and all of that stuff. We feed that into our simulation programs, and we have a good idea of honestly how much grip it is going to take.

That is why we think whether we’re going to lift or not, or whether we think we will lift or not have to lift. We feed that into our programs, and from there we can really start working setups around what we feel is best.

I really think this race is really going to lend itself towards a speedway-type race where we are working on taking drag out of the cars. Getting to that limit, kind of like at Talladega, where there were some guys who were fast but were out of control wrecking. There were other guys who were way more in control, but they were a little slower. I think a lot of it this weekend is going to be how much drag we can take out of the car without sacrificing handling too much.

Neff – Have you been spending more or less time in the wind tunnel now vs. what you were doing in the off-season?

We’re still working. Everybody is working hard. Like I said, everyone from Chevrolet down to the team levels. We’re working on everything that we can to try and catch up. We know we are a little behind the Fords and Toyotas. We’re working hard, and I think you always have to work harder when you’re behind.

I feel we’re going to catch up. We’re going to get there; it may just take a little more time. We have made gains, those guys are making gains while we’re making gains, so we have to work that much harder to outpace them in development. We’re getting there, and I feel good about it. We are testing a lot. and it is all not from a lack of effort. It is tough; we have been struggling as a manufacturer here lately but I do feel good. I feel like we’re going to get it back and get back on top.