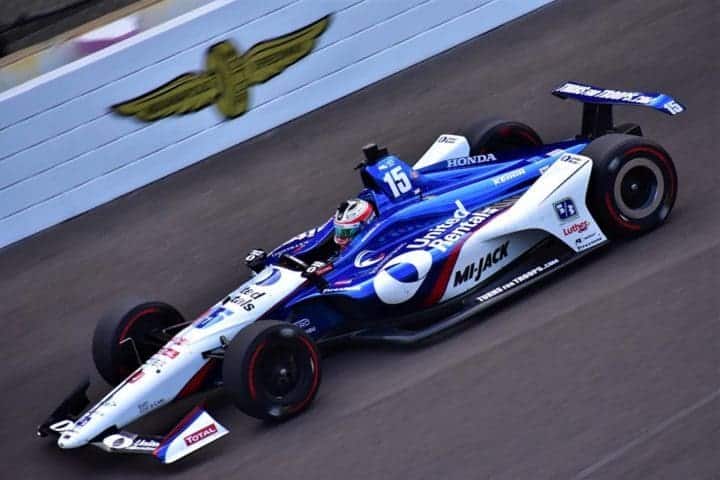 Graham Rahal led the way in Thursday’s Indianapolis 500 practice, the fourth of the week. Rahal’s quickest lap during the session was a mock-qualifying run Rahal admitted following the session. However, Rahal still was in tow behind Stefan Wilson.

“Stefan Wilson came out in front of me,” said Rahal. “He was at the end of the back straight as I was going out of (Turn) 2. I thought, for once I’m just going to stay in it (on the accelerator). Not normally my M.O., but I thought I might as well put a good one up there, at least lower my dad’s blood pressure for the night. Today was definitely a good day for us overall just to make a huge step forward in a lot of phases.”

Tony Kanaan finished second in the session, 0.0266 seconds off of leader Rahal. The fastest driver from Wednesday’s practice session Marco Andretti finished the session in third.

It took three days but the first on-track incident took place with JR Hildebrand. Hildebrand drifted high coming out of turn three, skimming the SAFER barrier, the slid along the wall before the car came to a stop in turn 4.

Hildebrand was uninjured in the incident and walked to the AMR medical vehicle under his own power. Hildebrand’s Salesforce-sponsored No. 66 sustained minor damage on the right side.

“Fast Friday” practice runs from 11 a.m. and runs through 6 p.m ET. The session will be the final before qualifying begins on Saturday beginning at 11 a.m. The starting lineup is set on Sunday beginning at 2:30 p.m. ABC will broadcast the final two hours of Saturday and Sunday’s sessions beginning at 4 p.m.