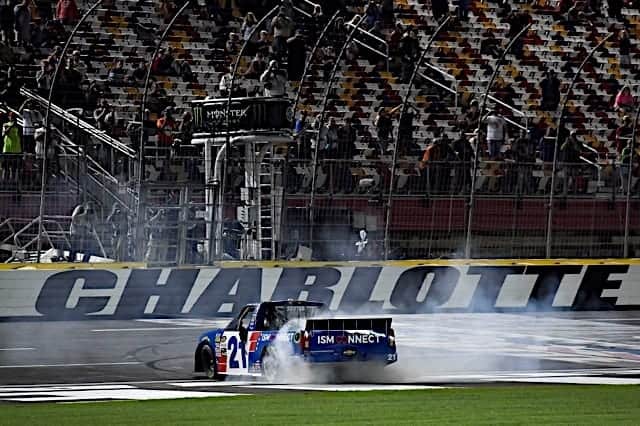 In a Nutshell: Johnny Sauter scored his third win in seven races this season when he beat Kyle Busch to the checkered flag by 1.34 seconds to win Friday night’s North Carolina Education Lottery 200 at Charlotte Motor Speedway.

“Today we had a good truck in practice, but obviously the adjustments Joe (Shear, crew chief) and the guys made before the race just really brought it to life that extra little bit,” Sauter said. “This is probably… this IS the biggest win of my career. This is a challenging place. I’ve had a lot of good runs here and a lot of bad runs here, so this is a big one. I don’t know anyone that doesn’t want to win in our backyard. I’m just really proud of these guys tonight.”

The driver of the No. 21 Chevrolet started on the pole after qualifying was canceled due to rain then led five times for a race-high 71 laps en route to his 10th win with GMS Racing. Brandon Jones, Brett Moffitt, and Ben Rhodes rounded out the top five.

Who Should Have Won: Despite never leading a lap, Kyle Busch had one of the strongest trucks out there, even though pit road miscues kept him from really showing it. The seven-time Charlotte winner lost multiple spots on pit road courtesy of slow stops. To make matters worse, he was hit with back-to-back penalties for crew members being over the wall too soon and had to restart at the tail end of the field both times.

“If my pit crew did not lose me six, seven spots and then have penalties and have to restart at the back every single time [we would have won],” Busch said after the race. “We passed the most trucks, but if you pass the most trucks, it doesn’t matter if you can’t win the thing where you need to be, restart where you need to be. Really pathetic night on pit road. These trucks are terrible in traffic. You can’t pass. Splitter game is horrendous. They want flat splitters and you put flat splitters on these things and they plow.”

That’s not to say Busch would have won if not for his troubles on pit road. But given his success at the mile-and-a-half track, it’s likely he would have been out front for a good chunk of the race. Instead, his quest for a record-tying 51st career Truck Series win waits until his final 2018 start at Pocono Raceway later this year.

Earlier this week, Todd Gilliland turned 18, which means he can now pilot the No. 4 Kyle Busch Motorsports Toyota full-time for the remainder of the 2018 season.

That also means Gilliland made his first mile-and-a-half start Friday night at Charlotte. Starting fourth after qualifying was rained out, the 18-year-old dropped to the back of the top 10 pretty quickly after the green flag flew, but a combination of pit road work and some impressive driving kept him inside the top 10.

“That was a huge learning experience, I mean all around from the very first lap,” he said after the race. “I think I fell back about 10 spots on the first lap. Just a different kind of racing. There’s really no way to prepare for it except to do it.

“Hopefully we can get a lot more mile-and-a-half experience from here on out. Get some consistency built into our team and hopefully just build on it, get stronger as the year goes on and I think we’ll be in contention at the end.”

Gilliland is going to be a driver to watch for the rest of the year. With just eight starts before Charlotte Friday night, seat time is going to be key for the rookie as he continues to familiarize himself with the trucks and the larger tracks the series visits. With KBM equipment on his side, it shouldn’t come as a surprise to anyone when he’s able to contend for wins later this season.

Following a disappointing outing at Kansas Speedway where he suffered from fuel pickup problems, Rhodes rebounded to finish fifth Friday night. Though his truck never appeared strong enough to battle up front, the driver of the No. 41 Ford started seventh, finished the first stage 12th and moved up to sixth by the end of stage two. The fifth is Rhodes’ third top five in seven races this season.

“I feel like our Alpha Energy Solutions Ford F-150 passed about 65 trucks tonight,” Rhodes said after the race. “It was kind of disappointing. I seemed like every single time we were on the outside, we would inherit the inside. You want to be on the outside here; it was kind of like winning the lottery. If you got the outside, you’d win big. If you came to the inside line on the restart, you would lose big.

“It seemed like every single time, we were the losers. We still made it up, we still got a top-five finish today, but the restarts were absolutely crazy. It was a tough night for our guys – we fought hard. The pit crew did a great job, mechanics did a great job – we’re just going to back to the drawing board on our front package, so next time we have to pass several trucks in one race, we can do it with no contest.”

It seems like the Ford teams, in general, still have some work to do to be able to compete for wins. However, recovering from mishaps like the fuel pickup issue Rhodes faced last weekend is the kind of comeback that helps point them in the right direction. As ThorSport continues to work on its transition to a new manufacturer, I’d expect the organization to pick up more and more speed as the season works its way past the one-third mark.

Tought night for @NieceMotorsport @CLTMotorSpdwy after both trucks were competitive and running inside the top-20 before experiencing late-race hardship.

Points Update: Thanks to his victory, Sauter expanded his point lead to 59 over Noah Gragson. Brett Moffitt is third, just six markers out of second. Rhodes and Grant Enfinger round out the top five. Crafton is sixth, followed by Stewart Friesen. Justin Haley, Dalton Sargeant and Myatt Snider round out the top 10.

Sauter has a stronghold on playoff points this season with 17. His next closest competition is Gragson, who has 10. Moffitt has six, thanks to scoring his first stage win Friday night, while Rhodes has two. Friesen and David Gilliland have one playoff point apiece.

Proud of my @KBMteam team last night! We were able to race up front all night and capture us a top 3 finish at @CLTMotorSpdwy ?? https://t.co/8MrAEId327

What a save!@Justin_Haley_ with an incredible catch, but he drops from 4th to 13th. pic.twitter.com/LOvXhSgztP

full right lock, downshift to 3rd, stay in the loud pedal, and tag that RR quarter on the fence, and drive out of it. badass day for the 24 guys. like they say, can’t choose your family, can’t choose the guys you race with ??‍♂️ #2FOE

You have to have everything go right to win one of these things. Thanks to all my guys for giving me a fast piece tonight! Came home 9th. Tried a different strategy at the end and ended up costing us a little. Back to the drawing board and onto the next one!

Tonight could have gone better. Got a penalty early & we started off super tight & were free after that, we kept searching. Got tight again on the last restart & lost our positions. We've got some work ahead in the off weeks. But I've got the hardest working team, proud of them?

Up Next: The Camping World Truck Series takes a couple weeks off before heading to Texas Motor Speedway. Last season, Christopher Bell led a race-high 92 laps en route to a narrow victory over Chase Briscoe under caution following Timothy Peters‘ dramatic flip down the frontstretch. Coverage for the winstartonlinegaming.com 400 begins Friday, June 8 at 9 p.m. ET on FOX Sports 1; the race can also be heard on your local MRN affiliate or SiriusXM NASCAR Channel 90.