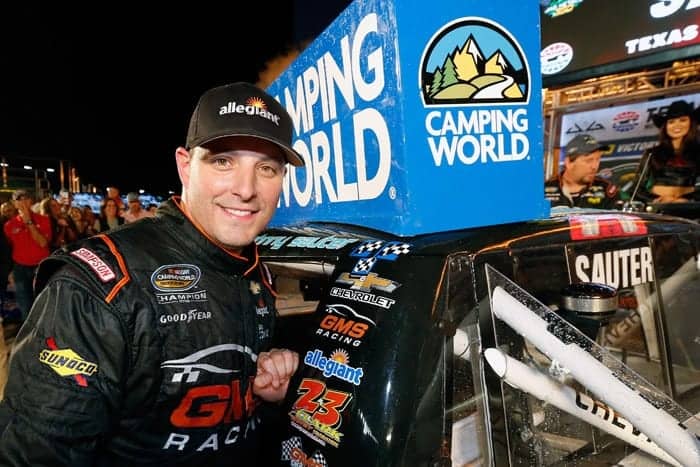 The NASCAR Camping World Truck Series has had a heck of a youth movement going on with the likes of Noah Gragson, Todd Gilliland, Ben Rhodes, Brett Moffitt and part-timer John Hunter Nemechek among them.  The average age of CWTS regulars visiting Victory Lane this season is 28 years old.

But the driver everyone is chasing right now is 40-year-old Johnny Sauter.

Sauter’s win in Charlotte marks his third in just seven races.  He kicked off the year with a victory at Daytona.  Then, he captured the trophy at Dover’s one-mile oval before scoring a win at 1.5-mile Charlotte.

The veteran-vs-young-gun battle has long been a hallmark of the Truck Series. Sure, it has served as a springboard for drivers to XFINITY and Cup. But it’s also a home for a group of career truckers like Sauter and his former teammate and two-time series champion Matt Crafton.

But while Crafton has struggled to find a foothold in 2018, Sauter has come out of the gate like a fire-breathing dragon. In his third season with GMS Racing, the veteran was once an upstart Cup driver. He only went to the Truck Series when internal changes left him without a Cup ride.  But he’s never looked back and has made his GMS team into a weekly contender. Earning the championship in his first season with them (2016) Sauter is currently leading the points.

His win at Charlotte puts an exclamation point on what’s been a stellar season to date.  It’s a track where he’s admittedly struggled and went winless in nine previous starts.

“I’ve definitely gotten better as I’ve gotten older,” said Sauter after Friday night’s race. In the past, he says, he “had the equipment but maybe not the people, or had the people but not the equipment. I feel like here, we have it all.”

Now, he’s got every ingredient to make a second title run in three years. That is… if he can keep up the pace against those youngsters.

That will be the hard part.

Gragson has finished in the top eight in three of his last four races. He also nearly won the last one before spinning while battling Sauter for the lead in the closing laps at Dover. He took his first win of the season at Kansas a week ago, jumping to second in points.

Gragson says a three-race stint in the XFINITY Series, during which he had a 4.3 average finish, paid dividends. He’s now more confident than ever driving his No. 18 Kyle Busch Motorsports truck. The KBM equipment is among the best in the garage and Gragson has made the best of it.

Gilliland, who turned 18 on May 15 and can now run the series full-time, also drives KBM trucks. He has two top 10s in three races this season.

Moffitt has a win. Nemechek has a win.  Without Sauter, the average winner’s age is just over 21. They’re only going to improve with experience, a reality that should have Sauter glancing over his shoulder.

The hard part for veterans like Sauter and Crafton is that the youth landscape changes on a yearly basis.  Last year, it was Christopher Bell, who has since moved on to XFINITY.  Gragson appears to be on the same path assuming there’s a ride available at Joe Gibbs Racing next year.  Someone else will move in to take their place and challenge them while they keep rolling on.

There might be no better rivalry in NASCAR right now than this one between two generations of racers vying for center stage in the Truck Series.  They race with respect and hunger for each other.

No matter who reaches Victory Lane, they all race with passion every time.

Amy, just watched the all star race. Pretty sick of DW & Fox shoving bubba down our throats like they did Danica. I’m the third race to get in the all star race bubba took two tires to start up fro n and DW wet his diper screaming look at bubba go, he’s gonna win. While the rest of us laughed knowing that four tires would prevail. In less than two laps bubba dropped like a rock from first to 11th. Yet there were Fox cameras interviewing the guy who finished eleventh. Ridiculous Dr and fox. The bubba never could even win an Xfinity race, what a joke. He’s not diversity nascar, his dad is White.